Upcoming Event:Join us for the exciting discussion with Danone on role of nutrition, protein in working professionals’ quality of life on July 31, 3pm.
you are here: HomeNewsTrends

Within a couple of hours after he shared the post, Nithin Kamath's account was seen with the blue tick, as Twitter decided to verify his handle.

Nithin Kamath, the co-founder of Zerodha, one of India's largest discount brokerage firms, shared a witty post on Twitter on June 4 after the microblogging site declined to verify his handle. Since his early childhood days,Kamath said, he has mostly been "rejected".

"Twitter @verified just reminded me of my school & college days, almost always rejected (sic)," he tweeted, sharing a screenshot of a note he received from Twitter stating that his handle cannot be verified with the blue tick as of now.

Within a couple of hours, however, his account was seen with the blue tick, as Twitter decided to verify his handle. 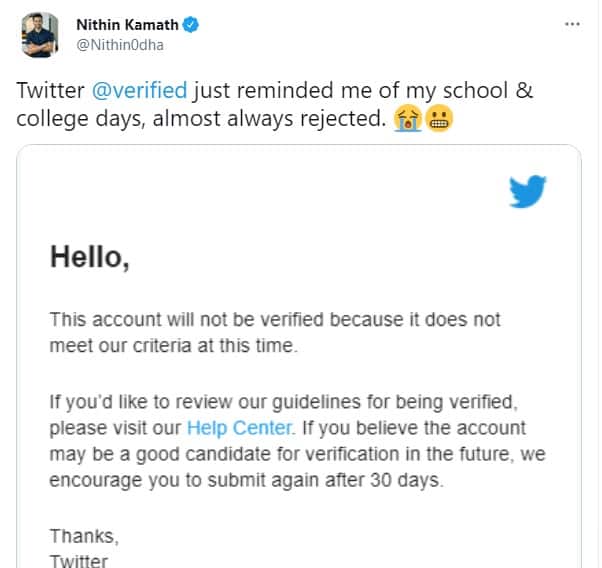 Commenting in a lighter vein on his post, CRED founder Kunal Shah said that in status driven societies, "people with blue ticks secretly want good salary". Kamath continued with the banter, saying "we are looking for a social media influencer with a blue tick". Shortly thereafter, Shah posted another comment stating, "Got you verified. Without the job or salary."

Notably, Kamath is emerging as one of the most successful business leaders. His firm has been under renewed media glare since Kamath announced a plan to buy back shares from early employees at a valuation of $2 billion, doubling in a year with stock markets on a historic bull run.

The $2 billion valuation is a key milestone given that Zerodha is one of the very few internet startups to not have raised any venture capital money while getting to a high valuation.
Moneycontrol News
Tags: #Cred #Kunal Shah #Nithin Kamath #Twitter #Zerodha Online
first published: Jun 4, 2021 08:37 pm