This leads to the government losing out Rs12,229.24 crore as payment from spectrum usage charges and interest. These charges are computed by using telecom companies’ revenue as the base. On the basis of this report government has once again appointed special auditors to check irregularities in telecom company’s accounts.

On July 21 (Comptroller and Auditor General of India) CAG had pulled six telecom companies for understating their revenue. CAG, in its report, had stated that Bharti Airtel, Vodafone, Idea Cellular, Reliance Communications, Aircel and Tata had understated their revenue by Rs 61,064.5 crore over the five-year period from 2010-11 to 2014-15. This leads to the government losing out Rs 12,229.24 crore as payment from spectrum usage charges and interest. These charges are computed by using telecom companies’ revenue as the base. On the basis of this report government has once again appointed special auditors to check irregularities in telecom company’s accounts.

A history of Abuse

This is not the first time CAG has pointed out anomalies in telecom companies' books. In March 2016, CAG had also tabled its report on revenue loss due to wrong calculation of AGR. In its report, CAG had claimed that six major telecom companies Airtel, Vodafone, Idea, Reliance Communications, Tata, and Aircel -had understated gross revenue of over Rs 46,000 crore for a period between 2006-07 and 2009-10 and denied the government its share of income which was estimated at more than Rs 12,400 crore. On the basis of the CAG report, the Department of Telecom (DoT) had appointed a special auditor for reassessment of the telecom companies' accounts. After the assessment, DoT had issued demand-cum-show cause notices to six private telecom companies for a total amount of Rs. 29,474 crores on account of license fee. This demand also included interest and penalty for not paying license fees on time. Results of this interest and penalty exceeds actual license fees demand. 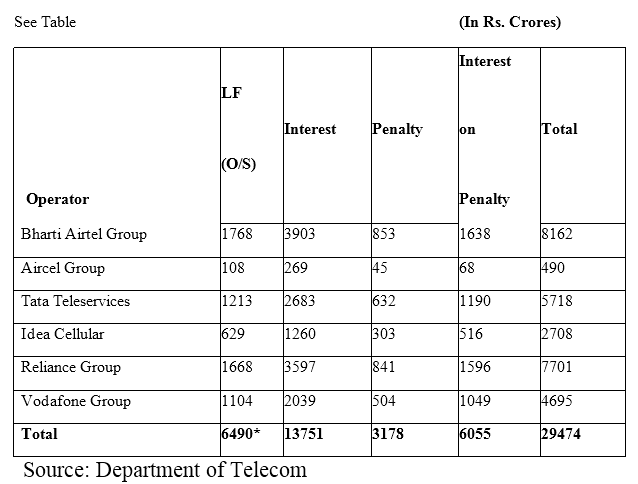 The definition of Adjusted Gross Revenue is under litigation since 2003. Fourteen years gone by and the matter is presently pending in the Supreme Court. Supreme Court has barred DoT from taking any coercive step to recover the outstanding dues from telcos.

As per the CAG the telecom players suppressed revenues through different accounting adjustments for commissions or discounts paid to distributors, promotional schemes such as free talk-time, as well as discounts for users of roaming services.

The CAG has also stated that exchequer was also shortened of revenue by telcos by excluding forex gains, interest income, sale of investment, profit on sale of fixed assets and dividend income from their reported aggregated gross revenue. The telecom operators share a percentage of their aggregated gross revenue with the government as annual license fees.

Bumpy Road Ahead for Telecom Companies

So far all the demands raised by DoT are pending in various courts. However CAG, Special Auditors appointed by government are confident that government demand is justified, and government will be able to win all these cases. Now, on the basis of assessment for a period between 2010-11 to 2014-15 government is ready with another set of notices. These notices will start hitting telecom companies from September.