On the back, the phone could get a 64-megapixel primary sensor.

The leaflet confirms both the design and some of the specs of the Vivo S7. The phone will opt for dual selfie cameras, with a 44-megapixel primary sensor. Additionally, the main selfie camera setup on the front will support autofocus.

On the back, the phone could get a 64-megapixel primary sensor. The camera layout on the back seems to be the same as that of the Vivo X50 Pro. The teaser image suggests that the phone will get another two sensors on the back alongside the 64-megapixel main shooter. 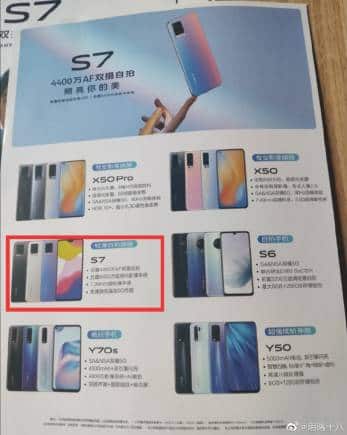 The phone will be powered by the Snapdragon 765G SoC with an integrated 5G modem. According to leaflet, the Vivo S7 measures a meagre 7.39mm thick. The phone will be available in Black, White, and Blue gradient colours.

Additionally, the phone will also feature an AMOLED display. Official images suggest that the power key is a regular button, while there is no fingerprint reader on the back. This means that the fingerprint sensor will be placed under the display, which can only be done with an OLED panel.

The Vivo S7 is arriving in China on August 3. However, there is no word on international availability. Vivo has been emphasizing selfie camera capabilities on the S7 on its official Weibo account.