Access Selected Content from
Financial Times on Moneycontrol Pro
Webinar :Register now for webinar on 'Trade BankNifty in just 15 minutes a day' - By Asmita Patel
you are here: HomeNewsTechnology

Samsung, which had lost the top spot to Huawei due to sharp declines in its major markets of India and Europe in April, rebounded in July and August as India recovered from a nationwide lockdown.
Moneycontrol News
Oct 19, 2020 / 09:09 PM IST

Samsung has regained the top spot in the global smartphone market in August, with 22 percent of the market share, according to Counterpoint’s latest Monthly Market Pulse report.

The South Korean smartphone maker, which had lost the top spot to Huawei due to sharp declines in its major markets of India and Europe in April, rebounded in July and August as India recovered from a nationwide lockdown.

The tech giant has now reached its highest market share in India since 2018, benefitting from opportunities arising due to anti-China sentiments in the country following the Galwan Valley clashes in June.

Samsung had 26 percent market share in India as of the June quarter.

According to the report, the tech giant is also widening the gap with market No. 2 Huawei, whose market share in August came down to 16 percent from 21 percent in April, and expected to fall further in the future due to US trade sanctions. 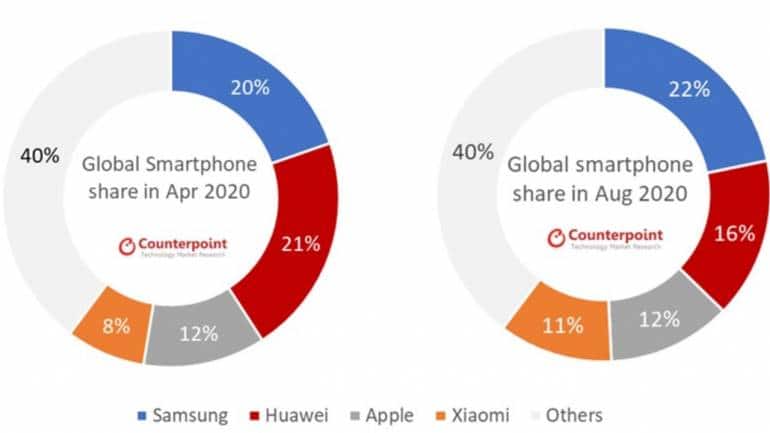 “Geopolitical policies and political affairs among nations are affecting the smartphone market in many ways. There will be heightened marketing activity to seize opportunities in these regions and segments. As a result, the concentration of top players in the smartphone market will be much stronger. We see players like Samsung, Apple, Xiaomi and Oppo benefiting the most,” said Minsoo Kang, research analyst, Counterpoint.
Moneycontrol News
TAGS: #Apple #Business #Huawei #India #Samsung #smartphones #Xiaomi
first published: Oct 19, 2020 09:09 pm