Samsung Galaxy S20 Ultra: Heavy on features, amazing camera; but there is room for improvement

Samsung’s Galaxy S20 Ultra is a souped-up smartphone packed with an array of features, but at Rs 92,999, is it worth the price?

South Korea-based tech giant Samsung launched its Galaxy S20 range of smartphones such as the Galaxy S20, S20 Plus, and S20 Ultra a few weeks ago. While the phones shared the same processor (Exynos 990 in India, Snapdragon 865 in the US), the three phones stood apart from each other in price, features and specifications. The Galaxy S20 Ultra was the one with the maximum possible features, and here are our first impressions of the phone. The S20 Ultra continues with a glass sandwich design as the S10+ and the Note 10+. While this gives the phone a premium look, it also makes the rear of the device prone to scratches/smudges and makes it slippery. Although the phone feels sleek in hand, the protruding camera module does make it look fat from one side. Though the phone weighs 220 grams, which most would count as a bulky device, the S20 Ultra feels well balanced in hand. The power and volume buttons are ergonomically placed on the right side, plus the phone is IP68 certified, which means the phone has protection against water, dirt and dust. On the bottom are the Type-C port and the speaker grill while the SIM card slot is on the top side. There is no 3.5mm jack, and that is a feature we wish Samsung did not remove on its flagships. Overall, Samsung once again stuns with its exquisite design and finish. The display has always been a strength of Samsung and with the S20 series, Samsung has demonstrated its technological superiority. You get a massive 6.9-inch dynamic AMOLED display with HDR10+ and a resolution of 3200*1440. Adding to that, the phone comes with a 120Hz refresh rate at full HD resolution which is immediately noticeable from smoother scrolling in the home panels, the app drawers and better animations. However, this would come at the cost of battery life – the 5,000mAh battery would struggle to last one full day of usage.

In the limited time we had with the phone, the Dynamic AMOLED 2X display impressed us with vibrant colours and deep blacks, delivering an excellent experience while watching videos, reading text and playing games. You also get an in-display fingerprint scanner, which is similar to the ones on the S10+ and Note 10+. Though Samsung claims the ultrasonic biometric sensor provides better security compared to its Android counterparts, we are not big fans of it as it is not the fastest. We had hoped Samsung would fix it on the S20 over the S10, but that’s not the case.

As expected, the S20 Ultra features the best available hardware specifications. You get the top-of-the-line processor (Snapdragon 865/Exynos 990) along with 12GB of RAM. For storage, you have 128GB UFS 3.0 speed internal storage, and this is the only part we felt could have been better. For the asking price and feature set, the minimum capacity should have been 256GB, in our opinion. There is also expandable storage via the hybrid SIM slot. The smartphone is fuelled by a massive 5,000mAh battery, which is a welcome addition for a flagship device. It comes with 25W fast wired charging support, 15W wireless charging, and 9W reverse wireless charging. All in all, the hardware is capable of any usage you want from your smartphone. 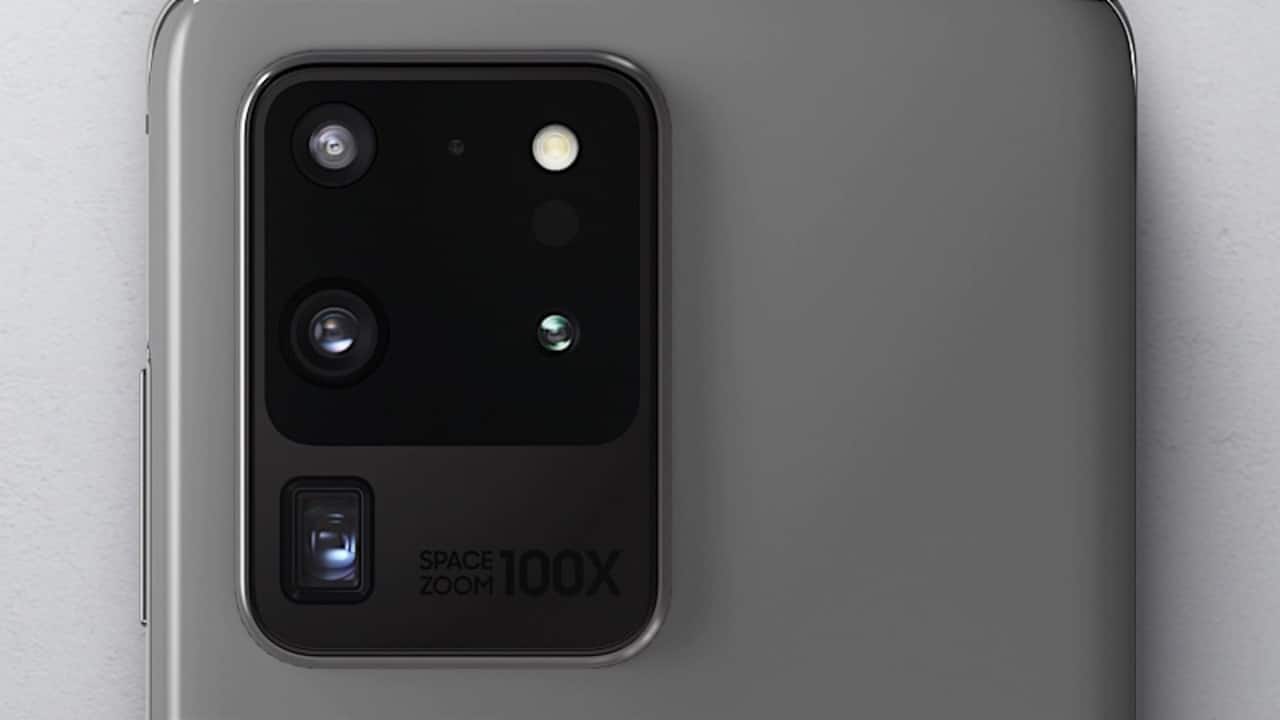 In optics, the S20 Ultra features a rear quad-camera setup with a 108MP primary sensor that has an f1.8 aperture, phase detection autofocus, and optical image stabilisation. This is coupled with a 48MP periscope lens with optical image stabilisation and 10X hybrid optical zoom, 12MP ultrawide sensor, and a ToF 3D camera. By default, that camera shoots at 12MP resolution via pixel binning to deliver the best possible results, and it works well. The photos captured have sharp details with vibrant colours in daylight as well as indoors. In low light the large sensor and low aperture work in tandem to capture surprisingly well-lit photos with minimal noise.

One of the major highlights of the rear camera is its zoom capabilities – 100x zoom to be precise. While it sounds good on paper, you have to keep in mind that it's not possible to use that feature handheld, you would need a tripod for usable results. The best we could do handheld was till 10x zoom and that too with great difficulty. Another feature that most people would not use is the 8k video recording support. It sounds good to have, but if you don’t have an 8k TV (which most people don’t have today), it's not a feature you would think about. Plus, keep in mind that you would quickly run out of storage if you are shooting at 8k resolution. Samsung has pushed the boundaries in terms of camera features and performance with the S20 Ultra, in our opinion.

At Rs 92,999, is the S20 Ultra worth the price? In our experience, we see that each area of the phone has its share of issues, and at an asking price this high, you do expect these issues to have been ironed out. As the flagship model for Samsung, the S20 Ultra comes loaded to the brim with features and offers top-notch performance. From our first impressions, we were impressed by the smartphone, but at the same time we feel there is a lot of room for improvement on the device as well.

The author is a senior tech journalist based in New Delhi.