New frontiers: Bitcoin goes past $2500, Ethereum up 2000% but fate of cryptocurrencies still uncertain in India

Bitcoin has appreciated of over 100 percent since January and is currently trading above levels of USD 2,000. Ethereum, which has the second largest market share among cryptocurrencies is at levels near USD 17o.

A Bitcoin (virtual currency) logo is pictured on a door in an illustration picture taken at La Maison du Bitcoin in Paris May 27, 2015. British authorities have come out in support of digital currencies in the name of promoting financial innovation, while proposing that regulations should be drawn up to prevent their use in crime. But it is technophiles who are leading the drive to make London a real-world hub for trade in web-based "cryptocurrencies", of which bitcoin is the original and still most popular. Picture taken May 27, 2015. REUTERS/Benoit Tessier - RTX1EWRL

With gaining global acceptance, the prices of cryptocurrencies have skyrocketed this year. Bitcoin surpassed the USD 2,500 mark for the first time and ethereum has rallied over 2000 percent in 2017.

Bitcoin has appreciated of over 100 percent since January and is currently trading above levels of USD 2,500. Ethereum, which has the second largest market share among cryptocurrencies is at levels near USD 17o. 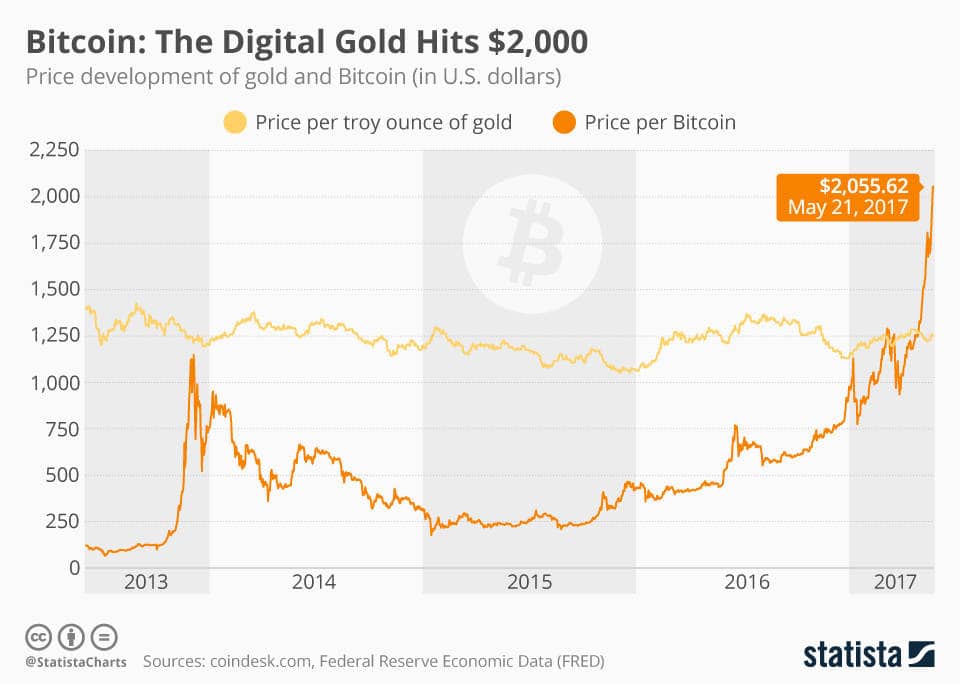 This rally is likely to continue as the bitcoin community has reached a consensus with regards to the ongoing scaling debate, reports suggest.

With the increasing number of transactions, the blockchain had to be updated in a manner to accommodate the growing volumes and also keeping the idea behind bitcoin intact.

Cointelegraph reports that a majority of blockchain industry bigwigs have reached a consensus regarding the bitcoin scaling solution and have agreed to enable the Segregated Witness (SegWit).

The SegWit versus Bitcoin Unlimited debate had stalled the technology’s development as a result of which the number of transactions being stuck in the backlog reached record heights recently.

It's looks like Bitcoin is going to follow another boom/bust cycle as per history. Hard to call a top, but we're probably not close yet...

Now that probably out of the way, transactions will become more streamlined this can further propel the rising price of bitcoin.

In India, the government has set up an inter-disciplinary committee chaired by the special secretary (Economic Affairs) to examine the existing framework with regard to virtual currencies.

“We have seen that in countries where governments have come out with a self-regulation policy, created an environment for the Bitcoin/Blockchain technology to grow, those countries have become the epicenter for innovation. Investments have started pouring in, next generation, new edge technology developments, user-friendly products and a new breed of entrepreneurs have developed,” says Saurabh Agrawal, CEO and co-founder of Zebpay.

“Digital India is the dream of our current government. By setting up a high-level committee to study and give suggestion on Virtual currency regulations, the government has again shown their keenness to study, understand and take well-thought decisions,” he says.

“As mentioned in the Press release by the government, they are going to study regulations rolled out by other countries, this will be really helpful as experts from world economic forum, senior members of world monetary policy have contributed in drafting regulations there,” he adds.

Many bitcoin industry players from India have offered suggestions towards regulating the cryptocurrency.

"Given the nature of technology - getting to know the customer through proper documentation and the needed support through authorized access to platforms like Aadhaar Bridge, making sure the trades happen only through the person's bank account and some way of reporting suspicious transactions to the authorities would help the ecosystem and aid in the orderly growth of bitcoin in India," Sathvik Vishwanath, CEO and co-founder of Unocoin says.

At the time of filing this report, bitcoin was above levels of USD 2,500 and ethereum was at USD 177 as per the CoinDesk price index.