Selected Articles from
Financial Times on Moneycontrol Pro
Webinar :Register now for webinar on 'Trade BankNifty in just 15 minutes a day' - By Asmita Patel
you are here: HomeNewsTechnology

According to Microsoft, the new Surface Laptop Go is the smallest and lightest laptop from the tech giant.

The new Surface Laptop Go sports a 12.4-inch PixelSense touch-sensitive display with a 1536*1024 pixels resolution and a 3:2 aspect ratio. The laptop is powered by an Intel Core i5-1035G1. The Surface Laptop Go can be configured with 4GB or 8GB of LPDDR4x RAM. The base model of the Surface Laptop Go arrives with 64GB of eMMC storage, although the 128GB and 256GB SSD storage options are also available.

The Microsoft Surface Laptop Go is equipped with a 720p webcam, studio mics, and Omnisonic speakers with Dolby Audio tuning. The notebook runs Windows 10 in S mode and comes with a 30-day free trial of Microsoft 365 Family subscription. Microsoft claims that the new Surface Laptop Go can last up to 13 hours on a full charge. The software giant also suggests that the new Surface laptop can reach 80-percent in just an hour using the 39W power supply.

I/O assortment on the Surface Laptop Go includes a USB Type-A port, USB Type-C port, a 3.5mm audio jack, and the proprietary Surface Connect port. You also get Wi-Fi 6, and Bluetooth 5.0 support with the Surface Laptop Go. The notebook will be available in three colour options — Ice Blue, Sandstone, and Platinum.

All three models of the new Surface Laptop Go feature the same 10th Gen Intel processor. The new Surface laptop will start shipping on October 14, although international availability hasn’t been announced yet. 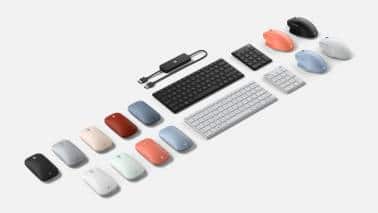