Ether, bitcoins closest rival, has appreciated over 5,000 percent since the start of the year and was faring at levels of USD 404, while this report was being filed.

Steadily stealing the spotlight from its senior bitcoin, ethereum crossed the USD 400 mark on Monday, as per the CoinDesk Price index.

Ether, a blockchain-based asset which acts as a fuel operating the distributed application platform Ethereum, has appreciated over 5,000 percent since the start of the year and was faring at levels of USD 404, while this report was being filed.

Formation of the Enterprise Ethereum Alliance (EEA), bitcoins scaling debate, rise of initial coin offerings (ICOs) and the most recent, the meeting between ethereum founder Vitalik Buterin and Russian President Vladimir Putin were among the key events that led to the rally in ether. Putin meeting Vitalik, signals that Russia might be looking to use the blockchain, giving the ether token further legitimacy.

One of the major contributors to ether's rally has been South Korea lately. Since March, demand from Korea has seen a major uptick. Currently, over 50 percent of trades are done over the Korean Won (KRW).

What is the reason behind this hunger for ethereum in Korea? Nobody knows. In a recent interview, even Vitalik Buterin said that he has no idea why South Korea is the largest Ethereum exchange market.

Experts across the board are optimistic of ether's future but have expressed concerns the cryptocurrency is in bubble territory as it has appreciated rapidly on the back of herd mentality.

This leaves the conclusion that South Korea is the largest Ethereum exchange market because people are speculating on the value of ether.

After breaching USD 3,000 yesterday, bitcoin price saw a sharp correction of around USD 400 (~13 percent),  within a span of a few hours. This comes as no surprise as the digital currency still remains very volatile.

The bitcoin volatility index, which measures standard deviation of daily returns for the preceding 30 and 60 days, pegs the cryptocurrency's volatility at 4.34 percent over the latest 30-day estimate.

The event when ethereum overtakes bitcoin in terms of market cap, is popularly termed as 'flippening' in the crypto-community.

Being the first of its kind, bitcoin has dominated the cryptocurrency market for the past 8 years. Till the start of 2017, it had a firm grip over the market with more than a 80 percent share. With the concept of blockchain gradually gaining popularity and awareness, altcoins -- alternate cryptocurrencies to bitcoin -- have soared, especially ethereum, in 2017. At the moment, bitcoins' market share has fallen to levels below 40 percent and ethereum now has a share of over 30 percent.

Ether's market cap has been creeping steadily close to bitcoin's as the interest to leverage blockchain based assets keep rising globally, with the two cryptocurrencies worth USD 36.4 billion and USD 44.9 billion at the time of report. 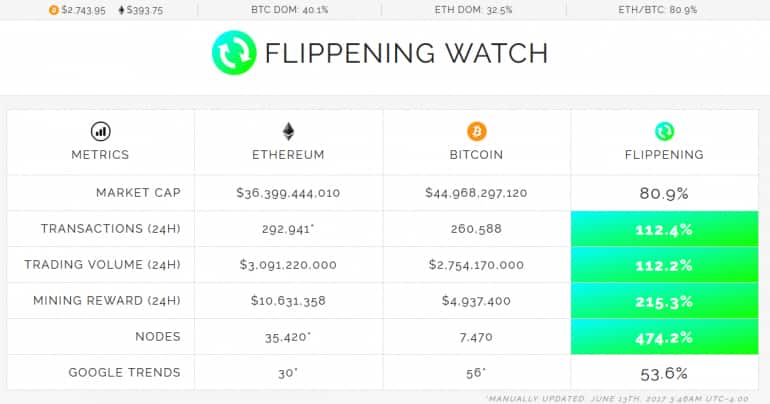