The joy of owning an electric vehicle: Here are reviews of five EV owners

The wow factor, the torque and the green number plate... owners of electric cars and two-wheelers share their experience

Call it being environmentally conscious, better cost of ownership or both. People have been more curious about electric vehicles (EV) than ever before and with every progressive launch the willingness to experiment with an EV is brighter all the more. But what is it like to own an EV? Moneycontrol spoke to owners of five different electric vehicles to find out about their experiences.

"I haven't been to a petrol station since 2 months"

Before switching to the Tata Nexon EV a few months ago automotive engineer-turned-business Amey Joshi owned two Tata SUV, Safari Storme and the Aria. But both existed his garage after the EV made its entry. "There were two things which got me interested in the Nexon EV. First is the price and second is its at-par performance with a ICE vehicle such as acceleration and other driving performance," said Joshi in an interview. 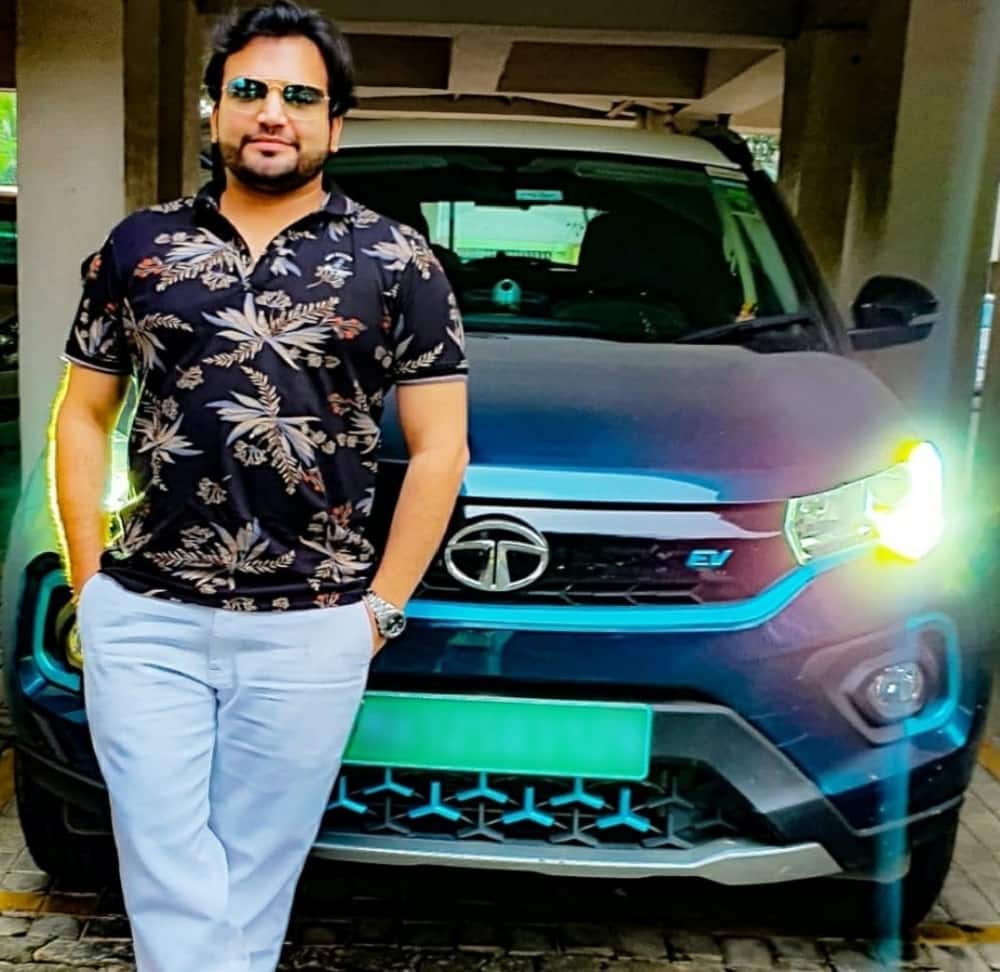 Amey Joshi with his Nexon EV.

Joshi also has the heavy-duty diesel-engine Volkswagen Tiguan which he uses for the long drives. But for intercity drives like Pune-Mumbai-Pune he takes his Nexon EV.  "I do a Pune-Mumbai-Pune in the Nexon without any trouble. There are a few fast chargers on the route that allows me to do the trip without any hassle. From 50 percent to 100 percent charge it takes 30 mins but to go from 0 percent to 80 percent it takes 1 hour," added Joshi.

"Some motorcycle riding friends were impressed by my EV"

36 years old, Bengaluru-based corporate employee, Vishnu Prasath does  a 20 km commute to his office and back every day in his Ather 450. He has been following this routine for the past 18 months and proudly claims that never once did he feel the need to switch back to a petrol two-wheeler.

"90 percent of my drive is to the office and back . This usage pattern was the same before we got the EV. We wanted the EV to come with good looks and that's why we went for the Ather. I initially wanted it for my wife but looking at the styling I started to prefer it too," added Prasath. 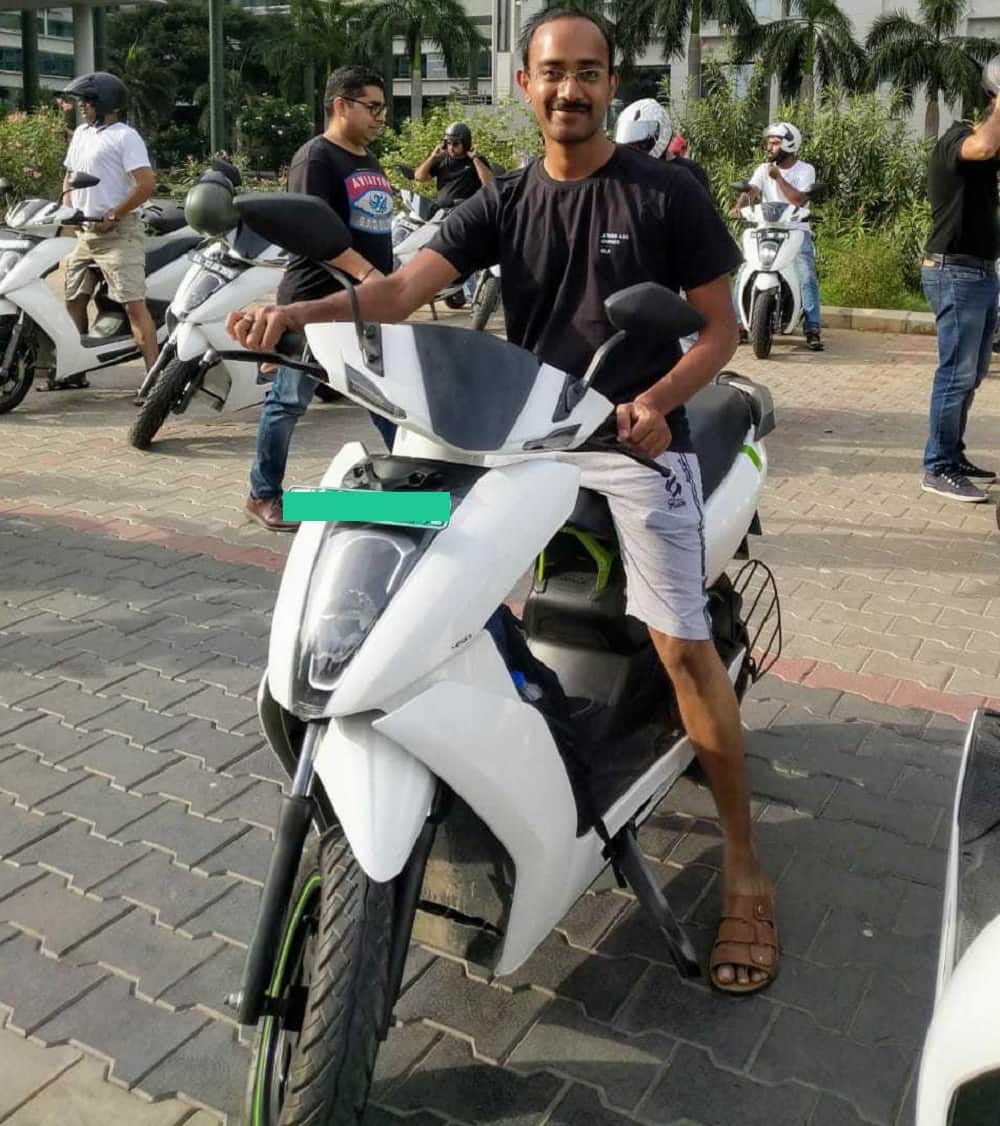 Vishnu Prasath with his Ather 450.

Prasath charges his EV once every three days and rides it for 20km per day, hitting maximum of 40km on odd days. He believes fence sitters interested in owing an EV have needlessly developed range anxiety.

"People focus on the range too much. Except for the initial few months, in one year that I have spent with the Ather, I never really faced situation where we felt the dire need for a recharge. We charge the vehicle ever third day and that's it," Prasath added.

"We never had a motorcycle within the family. But interestingly even my friends who own bikes like the Honda Unicorn were left surprised with the pick-up that my Ather offered," Prasath added.

“The rush of power is unmatched”

Hyundai was one of the first to launch an all-electric vehicle in India. Priced at Rs 23.71 lakh the Hyundai Kona is the costliest EV in India but that did not dissuade Bengaluru-based 40 year-old IT professional Kiran Devadiga.

“It was never about the cost but the offering for the price,” Devadiga said who also owns a BMW X1. “The Kona can hit 100kmph in under 8 seconds, many petrol-driven cars struggle to do that,” Devadiga added.

Since EVs have high torque power their pickup is quicker and smoother than vehicles powered by internal combustion engines. The Model X from Tesla is claimed to do a 0-100 kmph in 2.4 seconds.

“The instant torque meant that overtaking was a breeze and without a drop of petrol or diesel used,” added Devadiga.

Besides tied to a powerful motor the Hyundai Kona offers the biggest drive range among all the EVs in India at a claimed 452 km on a full charge. Dedaviga’s Kona returns a mileage of around 350 km.

“On one of our first drives the battery had 14 percent juice left which translated to a range of 45 km. We did a 45 mins fast charge of the battery which added 85 kms range to it and this was more than enough for the usual and heavy Bengaluru traffic. But as suggested by many, i would refrain from doing a fast charge because of the negative impacts on the battery in the long term,” added Devadiga.

A fast charger pumps in tremendous amount of power within a few minutes leading to overheating of the battery, which directly reduces the life of the battery. A 7.2 kW AC wall box charger is installed by Hyundai at Devadiga's parking spot in his society which is usually used to charge the Kona. A portable 2.8 kW charger is also supplied by Hyundai which is always kept in the car.

“Its cool to drive an EV and lot more economical”

Nearly three months after taking delivery of the electric Tata Nexon, 38 year-old, automotive engineer from Pune, Sharad Joshi, is all smiles talking about the green machine.

“The green number plate looks so cool and standout from the crowd. Curious strangers knocking on my window to know more has become a usual affair now,” informs Joshi.

The price Joshi paid to buy one electric Nexon would have fetched him nearly two petrol Nexons but running cost of the battery-powered vehicle is fraction of the regular version. It takes about 25-27 units of electricity to charge an electric Nexon fully. At Rs 7 per unit the cost per kilometre on the electric Nexon is just 85 paise.

For long drives Joshi uses his 2014 diesel Renualt Duster and to charge the Nexon he uses a charger installed by Tata Motors at his parking spot within his society. "My society has waived off the parking charges for the Nexon since its electric," added Joshi.

“Stopped by the police”

Much of the interest in EVs in India is generated by electric two-wheelers given that the country is already the world’s largest producer and consumer of two-wheelers. Several start-ups and big brand companies have nosedived into battery-powered two-wheeler segment. Among the many names is Bajaj Auto which made an entry with the launch of the electric Chetak.

Pune-based, 29 year old IT professional Swagat Bhomkar became an owner of one of 400 Chetaks produced by Bajaj Auto till date. “Due to its design the Chetak has that striking appeal which forces people to look at it twice. On the way home from the showroom after taking delivery a traffic policeman stopped me. He wanted to know everything about the Chetak and would not let go,” said Bhomkar.

At little over Rs 1 lakh the Bajaj Chetak is priced more than 40 percent higher than a petrol-fired scooter. Offering a much shorter range (around 95 km) than say the Honda Activa (200km+), the Chetak has not disappointed its initial buyers.

“I have bought it on finance so there is only a marginal difference (in cost of loan). We have been riding IC engine two-wheelers for more than 10 years and after a certain point the ‘wow’ factor just disappears. Chetak being electric has been a learning exercise for me and I keep getting flagged down very frequently so the ‘wow’ factor is here to stay,” added Bhomkar.

As these EVs are fairly new the need to take it to service centres has not arisen thus far. Since there are a lot fewer parts going into the making of an EV the maintenance cost, as manufacturers say is a fraction of the cost incurred for an ICE vehicle.

The biggest possible maintenance expense for an EV will be the battery replacement which is not expected to happen at least for five year. Most EV makers offer 3-8 year warranty on battery.

There are approximately only 20 moving parts in an EV compared to 2000 in an ICE vehicle. Lesser the number of moving parts lesser is the wear and tear. This directly translates to comparatively lower parts replacement costs.