Lamborghini’s electrification plans mark the end of an era

Is it time to bid adieu to the naturally-aspirated V12?

Lamborghini’s recently concluded “Direzione Cor Tauri” event, marked a bittersweet moment for motoring enthusiasts world over, with CEO Stephan Winkelmann placing emphasis on the “decarbonisation of future Lamborghini models and of the Sant’Agata Bolognese site”.  While Winklemann, emphasised that the brand will continue to stay true to its DNA, the writing was, quite literally on the wall: Lamborghini is going electric.

However, the brand has made it clear, that its swan song to the naturally-aspirated V12 supercar – a mainstay of Lamborghini since the brand’s inception in 1963 – is yet to arrive. Given the recent success of the Lamborghini Urus and the fact that the brand sold a record number of cars in both 2019 and 2020, Lamborghini knows that the demand for atmospheric engines continues to remain at an all-time high. In order to ensure that the might V12 echoes throughout this decade, Lamborghini has announced not one but two projects, due this year. However, it’s what comes after that marks a turning point for the brand.

The company has announced that it intends to reduce its carbon footprint by a staggering 50 percent by 2025. And given that the decade’s halfway point is the marker for most European car brands to validate their green credentials, it makes sense that Lamborghini plans to go all-electric by the end of 2024. Will it continue to stop selling it’s pre-existing ICE supercars? No. But all developments, modifications and special editions will be focussed on their EV performance cars. For starters, the transition will be bridged by hybrid performance cars a la Sian. Much like the Sian, Lambo’s first hybrid electric supercar will surface in 2023. Winklemann stated that Lambo will invest an unprecedented 1.5 billion Euros in its electrification project, with the first all-electric Lamborghini slated to debut in the second half of the decade.

Will Lambo continue to have the edge? 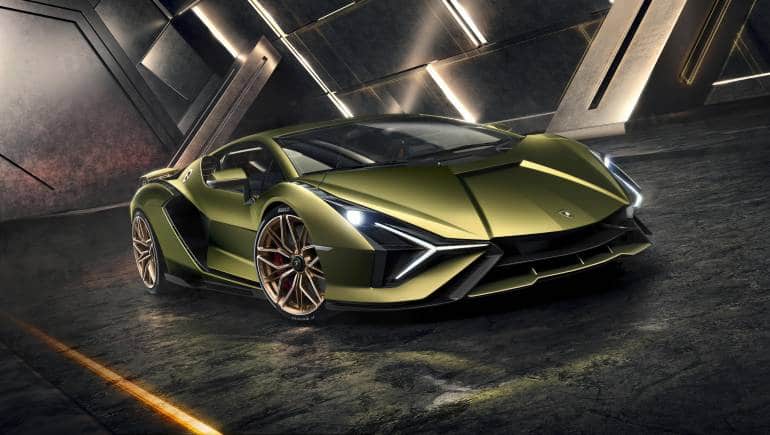 By 2024, Lamborghini will be far from the only brand making electric supercars. Given that even a top-end Tesla Model S in its famed “Ludicrous” mode can out accelerate a Porsche 911, one does not have to go the supercar route to get differentiated electric performance. Then there’s the fact that a new breed of electric hypercars have already surfaced. Rimac, the Croatian EV startup (in which Porsche owns a 24% stake) has already launched two road legal hypercars. Then there’s the fact that the upcoming Tesla Roadster will most likely blow everything else out of the water with a claimed 1.9 second 0-100kph acceleration figure. That makes it faster than a Bugatti Chiron.

Even Automobili Pininfarina, chose to debut with an electric, two-seater hypercar. The famous Italian design house which created some of the 20th century’s most sensational supercars, ventured towards carmaking in 2018, with an all-electric concept. The likes of Pagani, Koenigsegg and a slew of other manufacturers are also due to launch their all-electric hypercars, very soon.

What we will leave behind

Apart from glacier-melting carbon emissions? Given the simplicity of the electric powertrain, it would become difficult for car makers to provide differentiated driving experiences, particularly when it comes to linear performance. For Lamborghini, this would mean relying on the other dynamic attributes of its performance cars, which includes cornering, aerodynamics and the extensive use of lightweight carbon-fiber – a material that features heavily in their current crop of supercars, and, according to the brand, will continue to be one of the main repositories of their performance DNA. The glorious soundtrack, the quick-shifting cogs and the high-revving nature of Lambo’s cast aluminium engine blocks will certainly prove hard to replace. Sure, electric powertrains deliver torque right at the beginning, giving it the sort of momentum that even NA cars don’t have. But there’s a level of driver engagement that traditional supercars have, could be automated to a huge extent, much like it already has. Lamborghini is entering a new era, where the rarefied ace up its sleeve will become ubiquitous. And ensuring that its future crop of supercars are Lamborghinis first, and EVs second, will be the biggest challenge for the brand.