Honda NX200 trademark registered in India; Hero Xpulse 200 may finally have a rival

Honda’s NX nameplate has been in use for a while in international markets. It catered to the dual-sport category under names such as the NX-4, NX250 and NX500 Dominator.

Honda has been introducing new motorcycles ever since the start of this year and it doesn’t seem to stop. The newest entrant seems to be a rival to the Hero Xpulse 200 called the NX200.

Over the past year, Honda has unveiled a range of bikes to strengthen their offerings in the 200cc-500cc segment. The Honda Hornet 2.0, CB350 bikes and even the CB500X, the latter two of which are sold through their premium Big Wing dealerships.

Honda has now trademarked the NX200 name for India and this will directly rival the Xpulse 200 ADV, a motorcycle that didn’t have any real competition till now except for higher capacity bikes. 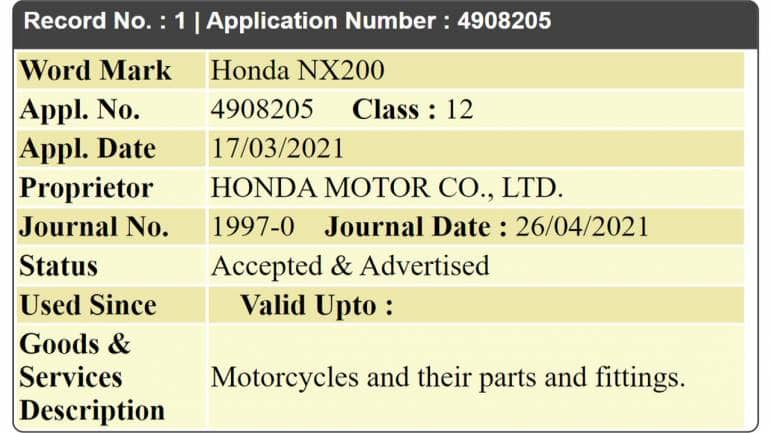 Honda’s NX nameplate has been in use for a while in international markets. It catered to the dual-sport category under names such as the NX-4, NX250 and NX500 Dominator. The new name will suggest that Honda is, or at least will be, working on a dual-sport bike for India, a design which will be similar to the Xpulse.

Not much is known about the new bike at the moment. From what we gather, it could sport styling similar to the CRF 250L, a rally-inspired bike that features tall suspension, a flat seat and high handlebars, everything that is good for a thrashing offroad. The engine could be the same as the one used in the Hornet 2.0, a single-cylinder 184cc motor capable of churning out 17PS of power and 16.1 Nm of torque. Switchable ABS would be just as welcome as Honda selectable torque control (company speak for traction control).

Now, when the new bike does launch is still a mystery, but it will offer significantly tough competition to the Xpulse, if Honda prices it right unlike the CB500X.