35 Years To This Day, Microsoft Released The First Version Of Windows To Consumers

Windows 1.0 was Microsoft's first true attempt at a graphical user interface in 16-bit.

Microsoft Windows, one of the most widely used and liked operating system completed its 35th anniversary on Friday. Originally codenamed Interface Manager, the OS was announced in 1983 by Bill Gates and was first shipped on November 20, 1985.

Windows 1.0 was Microsoft's first true attempt at a graphical user interface in 16-bit. The first incarnation of Windows was a front end for Microsoft's command-line DOS or Disk Operating System. Windows 1.0 provided access to Word processing, drawing, an address book, a calculator, and more.

Windows 1.0 only supported titled Windows and had desktop features like MS-DOS Executive file manager, Notepad, Terminal, Calendar, and Clock. Reversi, a strategy board game, was the first to arrive with Windows 1.0. At the time of its launch, Windows 1.0 was available for $99. 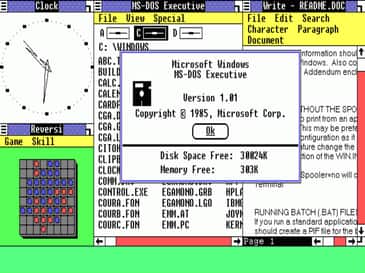 One of the reasons Windows 1.0 was so notable was because it heavily relied on the use of a mouse, which wasn't a common PC input device at the time. The game Reversi was integrated into Windows 1.0 to help users get familiar with the mouse input system. The game relied on mouse control to get people used to moving around and clicking elements on the screen.

Microsoft 1.0 got a successor two years later in the form of Microsoft 2.0, which became the first Windows platform for Microsoft's Word and Excel applications. Windows 1.0 was declared obsolete on December 31, 2001, at which point Microsoft stopped providing support and updates for the system.
Carlsen Martin
TAGS: #Microsoft #PC #Windows
first published: Nov 20, 2020 06:07 pm