Upcoming Webinar:Watch a panel of experts discuss: Challenges of continuously evolving regulation for Cryptocurrency, on 7th July at 3pm. Register Now
you are here: HomeNewsScience

NASA's Perseverance rover is aiming to land at the base of an 820-foot-deep crater called Jezero, site of a former lake and water system from 3.5 billion years ago that scientists suspect could bear evidence of potential past microbial life.

NASA's next-generation Mars rover Perseverance blasted off from Florida's Cape Canaveral on July 30 atop an Atlas 5 rocket on a $2.4 billion mission to search for traces of potential past life on Earth's planetary neighbor.

The next-generation robotic rover - a car-sized six-wheeled vehicle carrying seven scientific instruments - also is scheduled to deploy a mini helicopter on Mars and try out equipment for future human treks to the fourth planet from the sun. Its arrival at Mars is planned for Feb. 18 at the site of an ancient river delta.

It soared into the sky from the Cape Canaveral Air Force Station in Florida at 7.50 am EDT (1150 GMT) under clear, sunny and warm conditions, carried by an Atlas 5 rocket from the Boeing-Lockheed joint venture United Launch Alliance. The launch took place after the Jet Propulsion Laboratory (JPL) facility in Pasadena, California where its mission engineers were located was rattled by an earthquake.

"The spacecraft is in good health and on its way to Mars," NASA Administrator Jim Bridenstine wrote on Twitter.

The launch was not without a minor glitch. In the first few hours after liftoff, retrieving precise location and positioning data from the spacecraft was hampered in a brief "communications issue," NASA officials said, involving the agency's global network of antennas used to communicate with its most distant probes. The issue was quickly resolved.

Also read: NASA's next Mars rover is brawniest and brainiest one yet

This marks NASA's ninth journey to the Martian surface.

"It's really kind of a key of a whole bunch of new research that we're doing that is focused on the question ... is there life out there?" the space agency's science division chief Thomas Zurbuchen said on a NASA live stream after the launch.

Jet Propulsion Laboratory Director Mike Watkins quipped about the California quake: "It was just the Earth being excited about going to Mars. It was a very minor event. Everything's fine, and we're on our way to Mars."

Perseverance is due to land at the base of an 820-foot-deep (250 meters) crater called Jezero, site of a former lake and water system from 3.5 billion years ago that scientists suspect could bear evidence of potential past microbial life.

Also read: Perseverance rover | How NASA found the ideal hole on Mars to land in

Scientists have long debated whether Mars - once a much more hospitable place than it is today - ever harbored life. Water is considered a key ingredient for life, and Mars billions of years ago had lots of it on the surface before the planet became a harsh and desolate outpost.

This was the third launch from Earth to Mars this month, following probes sent by the United Arab Emirates and China.

Aboard Perseverance is a four-pound (1.8 kg) autonomous helicopter named Ingenuity due to test powered flight on Mars. The thin Martian atmosphere - 99 percent less dense than Earth's - poses a challenge to Ingenuity, which was designed to be light, with rotor blades that are larger and spin more quickly than needed for a helicopter of its mass on Earth.

Since the first Mars rover Sojourner landed in 1997, NASA has sent two others - Spirit and Opportunity - that have explored the geology of Martian plains and detected signs of past water formations. NASA also has successfully sent three landers: Pathfinder, Phoenix and InSight. 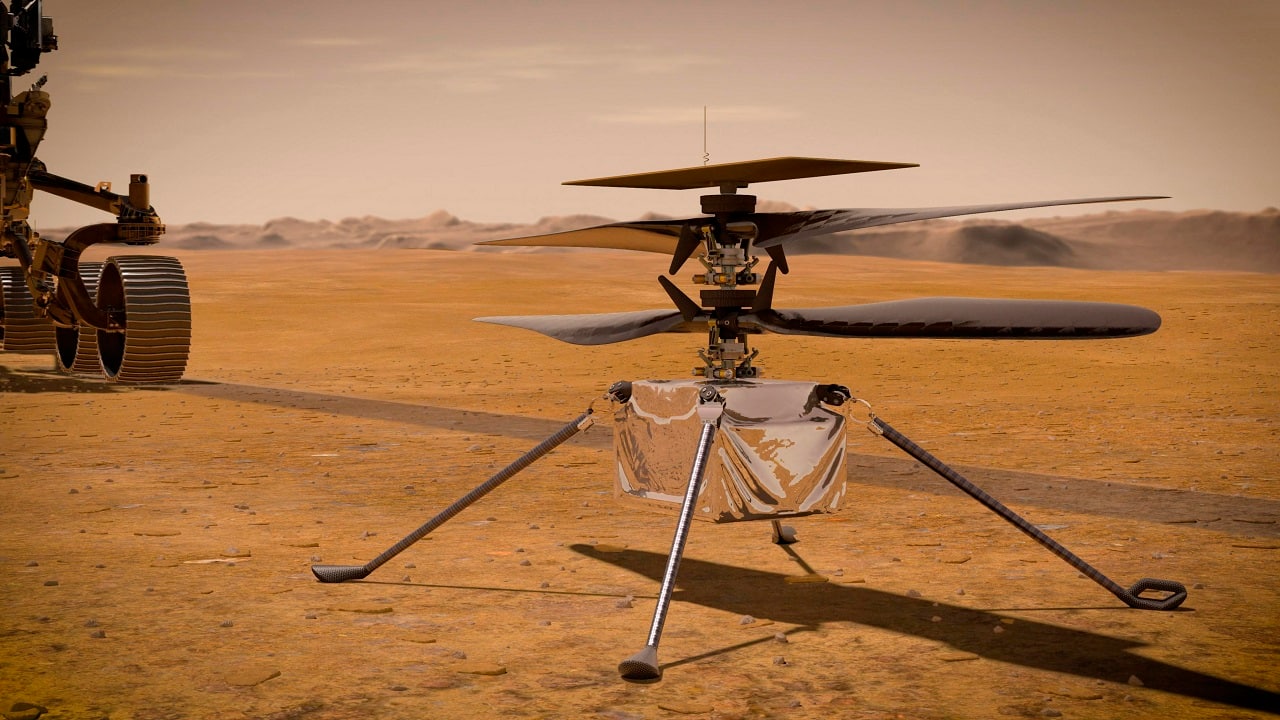 This illustration made available by NASA depicts the Ingenuity Mars Helicopter on the red planet's surface near the Perseverance rover, left. NASA is upping the ante with its newest rover headed to Mars. Set to rocket away this week from Florida, Perseverance is NASA's brawniest and brainiest Martian rover yet. (NASA/JPL-Caltech via AP)

The United States plans to send astronauts to Mars in the 2030s under a program that envisions using a return to the moon as a testing platform for human missions before making the more ambitious crewed Martian voyage.

Perseverance will conduct an experiment to convert elements of the carbon dioxide-rich atmosphere into propellant for future rockets launching off the Martian surface, or to produce breathable oxygen for future astronauts. Perseverance also will collect and store rock and soil samples intended to be returned to Earth in the future.
Reuters
Tags: #Current Affairs #Mars #NASA #science #space
first published: Jul 31, 2020 07:58 am