Upcoming Event:Join us for New HorAIzon from Oct 6-7, 2pm and be a part of exciting conversations on tech & innovation
you are here: HomeNewsPolitics

Priyanka Gandhi Vadra staged a silent protest before a Mahatma Gandhi statue in GPO Park in the state capital against the Yogi Adityanath-led BJP government of Uttar Pradesh. (File Image)

The Uttar Pradesh Congress has called for applications from ticket aspirants in the upcoming assembly elections with a deposit of Rs 11, 000. A circular to this effect has been issued by UP Congress chief Ajay Kumar Lallu.

The circular that asks prospective candidates to submit applications by September 25 comes after the Congress general secretary Priyanka Gandhi Vadra wrapped up her visit to the poll-bound state. The party has decided to declare candidates for 2022 assembly elections well in advance as part of its strategy in the elections.

READ: Uttar Pradesh was run by gangsters before 2017, now such elements behind bars: PM Modi

“The amount should be deposited via demand draft, pay order or RTGS,” said the circular Lallu on September 14. There is no mention of whether there will be refund or not if the aspirant doesn’t get a ticket. 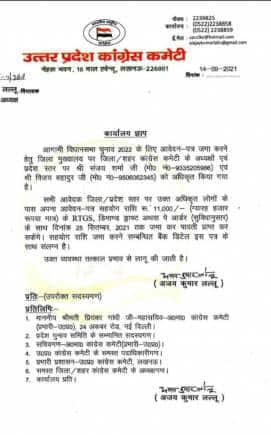 The Congress has faced issues related to delayed candidate selection and confusion over candidate names in UP in the past.

The Congress circular is a four-page document in which the particulars of the candidate need to be filled in. It asks for details about past elections at panchayat, Vidhan Sabha, Lok Sabha or any other level that the aspirant has contested. A separate section asks details about social media presence.
Moneycontrol News
Tags: #Ajay Kumar Lallu #All India Congress Committee #Congress General Secretary Priyanka Gandhi Vadra #Current Affairs #India #Narendra Modi.BJP.UP elections #Politics #UP Congress
first published: Sep 15, 2021 09:15 am