The rise and rise of BJP: 17 out of 29 states in saffron grip

BJP is now in power in 17 of India’s 29 states and this may not even be the end of the run.

The saffron wave that hit India mid-2014 has all but reinforced BJP's rising dominance in Indian politics. If anything, it has only grown in momentum and if you take a look at a map of India colour-coded to depict which political party is in power in each state, you would find that it has now developed into tsunami.

It all started when the Bharatiya Janata Party (BJP) won the 2014 assembly elections with a single-party majority in the Lok Sabha, riding on the popularity of Narendra Modi, the then Chief Minister of Gujarat.

Modi subsequently became India’s 14th Prime Minister and the party has not looked back ever since. Between then and now, the BJP has managed to win a whopping 12 state assembly elections, 9 of which it won with a single-party majority. It was already in power in 5 states – Gujarat, Rajasthan, Madhya Pradesh, Chhattisgarh and Nagaland.

The winning run started with Andhra Pradesh and Arunachal Pradesh, both of which had their last state assembly elections roughly at the same time as the 2014 general elections.

The BJP managed to convert nation-wide popularity for Modi at the time into wins in these states. In Andhra Pradesh, the party formed a coalition with the Telugu Desam Party, whereas in Arunachal Pradesh it won a single-party majority.

By the end of 2014, BJP, which was in power in 5 states and not in the Centre before the general elections, had become the single-largest party in Parliament and was in power in 11 states. 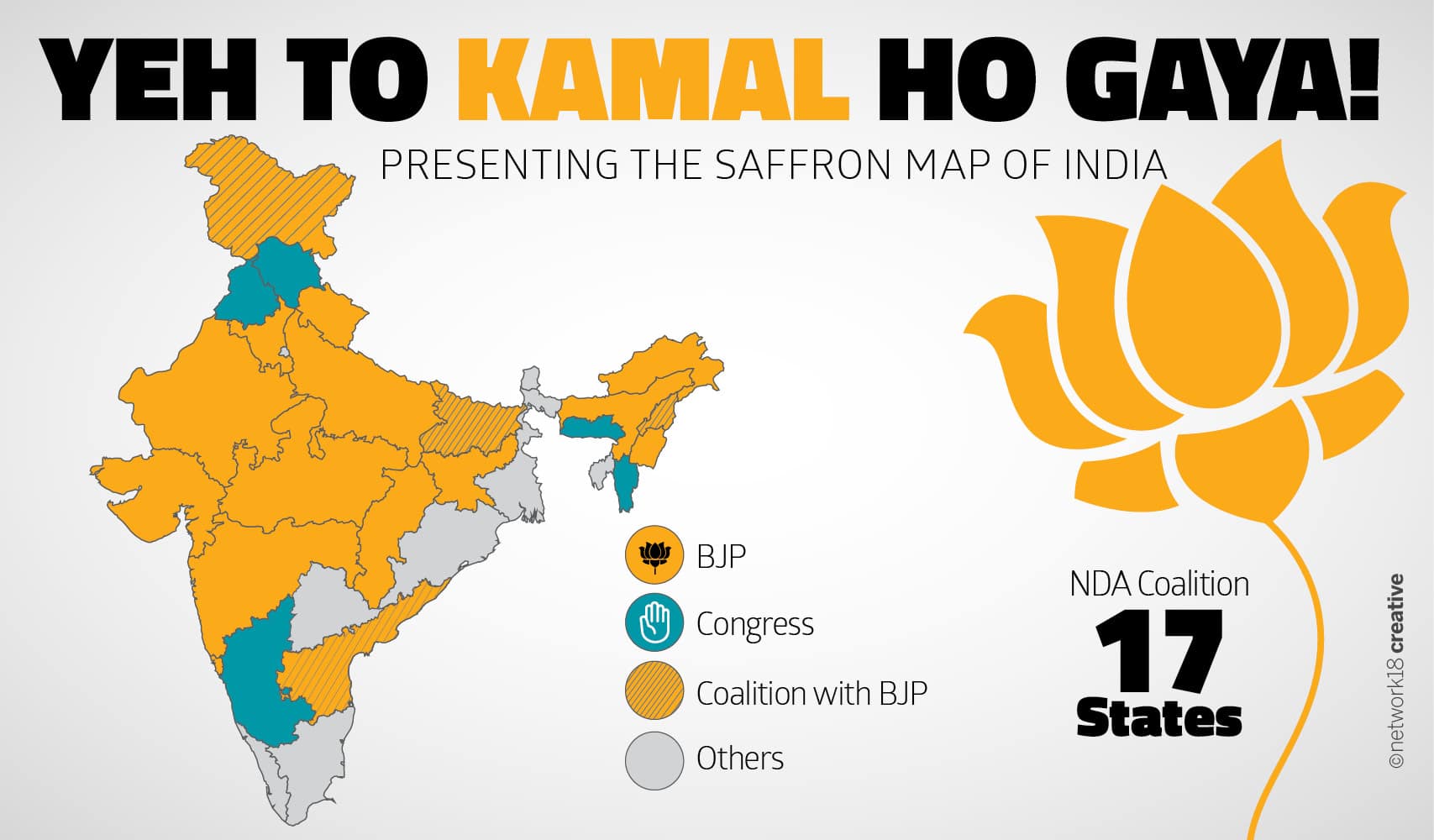 The following year comprised only one state assembly election – Bihar’s. BJP was still the most popular political party in the country and most people expected a convincing victory there.

However, in order to combat BJP’s belligerent run, the Janata Dal (United), Rashtriya Janata Dal and the Indian National Congress united against the party in the election and managed to keep it from securing power by registering a comfortable win.

Recovering from this, BJP registered another significant state election victory in April 2016, this time in Assam, which used to be a Congress-dominated state. It carried this momentum going into the Uttarakhand, Goa and Uttar Pradesh state elections in February and March this year and secured single-party majorities in each of them.

The sweetest surprise, though, would only come a year later, when Nitish Kumar, the Chief Minister of Bihar, resigned from his post earlier this week and broke his party's alliance with RJD and Congress.

Nitish was sworn in as the new Chief Minister less than 24 hours after he resigned, but this time with the support of the BJP. The following day, Nitish and his new government, formed with the BJP, won the crucial trust vote in the Bihar State Assembly, with 131 legislators voting in favour and 108 voting against.

BJP is now in power in 17 of India’s 29 states and this may not even be the end of the run. Gujarat, which happens to be Narendra Modi’s homeland, will be holding assembly polls in December this year. Himachal Pradesh’s assembly election is also slated to take place around the same time.

In addition to this, Chhattisgarh, Karnataka, Madhya Pradesh, Meghalaya, Mizoram, Nagaland, Tripura and Rajasthan will all be holding assembly polls over the course of 2018. Out of these, BJP is not in power Himachal Pradesh, Karnataka, Meghalaya, Mizoram and Tripura and will be looking to add these states to its kitty.
Tags: #BJP #Politics
first published: Jul 28, 2017 04:27 pm