Puducherry Exit Poll 2021: Both exit poll surveys predict a win for the BJP alliance. The halfway mark in the 30-member assembly stands at 16.

The Puducherry assembly election results are likely to be a one-sided affair as the AINRC-led NDA alliance is set to come back to power, the poll of polls results have predicted.

The poll of polls result is based on two exit polls and predicts the AINRC-BJP alliance to win 18-21 seats in the 30-member Puducherry legislative assembly. The ruling Congress-DMK alliance, meanwhile, is expected to win just 8-12 seats, while others are likely to get 1-2 seats. 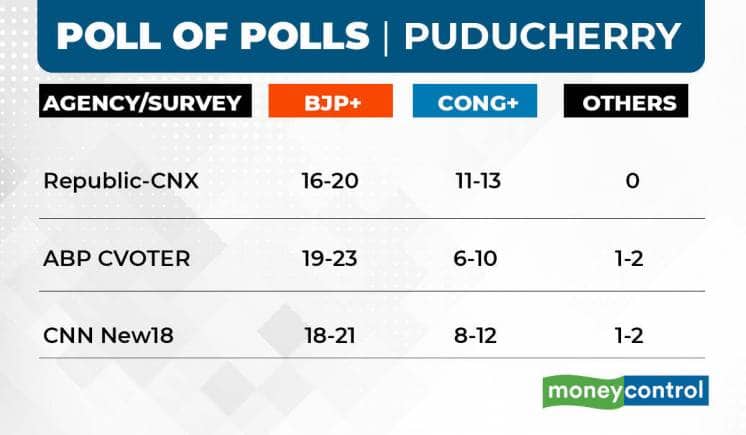 The poll of polls result is based on the exit poll results of Republic-CNX and ABP CVOTERS.

The single-phase assembly polling in Puducherry was concluded on April 6 with a voter turnout of 81.70 percent, according to Election Commission data. A total of 820,446 voters cast their votes out of 1,004,197 registered voters in the whole Union Territory.

The Union Territory is witnessing a direct contest between the UPA and NDA. The AINRC contested 16 of the total 30 constituencies, the BJP on nine seats and the AIADMK on five seats. The Congress fought on 14 seats and supported an independent candidate in Yanam. The DMK has fielded candidates in 13 seats. The Viduthalai Chiruthaigal Katchi (VCK) and the Communist Party of India (CPI) contested one seat each.