Opposition parties to boycott President's address to Parliament on January 29

In the joint statement, the parties lashed out at the Prime Minister and the BJP-led Centre for being arrogant, adamant and undemocratic in their response regarding the constitutional validity of the farm laws

The leaders of 16 opposition parties led by the Congress will boycott President Ram Nath Kovind’s address to the Parliament on January 29 over farm laws.

The address by the President to both houses of Parliament marks the beginning of the Budget Session.

In the joint statement issued on January 28 the parties announced that they have decided to stay away from the President’s address in both the Houses of the Parliament while reaffirming the collective demand for repeal of the farm laws and in solidarity with the agitating farmers.

The statement says that the farm laws  were brought 'without any consultations with states and farmer unions and lacked national consensus'. The parliamentary scrutiny was bypassed and the laws were pushed through muzzling the Opposition," it said.

The budget session of Parliament is being conducted in two parts. The first phase of the session will begin on January 29 with President’s address and end on February 15. The second phase will be held between March 8 and April 8. The Union budget will be presented in parliament on February 1

"The farm laws are an assault on the rights of the states and violate the federal spirit of the constitution. If not repealed, these laws will dismantle the edifice of National Food Security that rests upon MSP, government procurement and PDS," the statement said accusing the Prime Minister and the BJP government remain arrogant, adamant and undemocratic in their response. 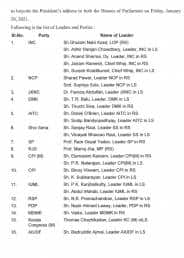 "Shocked by this insensitivity, we, the following Opposition parties, reaffirming the collective demand for the repeal of agri-laws and in solidarity with Indian farmers have decided to boycott the President's address in both houses of the Parliament on January 29," the statement reads.

Among the parties who are signatories of the statement are Congress, NCP, Trinamool Congress, Shiv Sena, SP, RJD, DMK,  CPI, CPI (M), among others.

Aam Aadmi Party  (AAP), which is not a signatory of the joint statement, has also announced that its members in the House will boycott the President's address. Shiromani Akali Dal (SAD) has also announced that it will boycott the President's address over farm laws.
This will be second time in a row when the Opposition will stay away from the President’s address – a constitutional requirement before any session of the Parliament to begin. Last year, the Opposition parties had staged a protest in front of Ambedkar statue in support of those opposing the citizenship amendment law.

Thousands of farmers, primarily from Punjab and Haryana, have been camping at several Delhi border points for over two months, demanding the repeal of the laws, and a legal guarantee on minimum support prices (MSP) for their crops.

Enacted in September 2020, the three laws have been projected by the Centre as major reforms in the agriculture sector that will remove middlemen and allow farmers to sell their produce anywhere in the country.

The protesting farmers, however, have expressed their apprehension that these laws would pave the way for eliminating the safety cushion of minimum support price and do away with the 'mandi' (wholesale market) system, leaving them at the mercy of big corporates.

Eleven rounds of talks between farmers’ unions and centre have so far failed to end the impasse.

A tractor's march by farmers held on January 26 turned violent injuring many police personnel and farmers. A group of farmers broke away from the designated route and entered the Red Fort while a religious flag was hoisted next to the national flag. The farmers' unions have, however, distanced themselves from the violence and the Red Fort incident.