Kejriwal, who started his career as an activist-protester, has now grown into a calm establishmentarian

After the Citizenship Amendment Bill was passed, Delhi witnessed aggressive protests. Of them all, Shaheen Bagh in south-east Delhi garnered a lot of attention – it has been running for over 50 days now, is being led by women and children and is a peaceful sit-in. Many activists have lent their support to the protests as well.

The last time the Capital had seen an upheaval of this magnitude was in 2011-2012 when the Arvind Kejriwal and Anna Hazare-led anti-graft movement staged dharnas and held hunger strikes at the iconic Jantar Mantar. For this, Kejriwal earned a reputation of an “anarchist” and his polity was branded “dharna politics”.

However, this poll season has seen Kejriwal departing from his cornerstone of “dharna politics”, despite multiple baits thrown at him by Home Minister Amit Shah. He has chosen to support the Citizenship Act protests at Shaheen Bagh only from a safe distance, not explicitly mentioning his or the party’s stance on the demonstration. When asked why he hasn't visited the sit-in at Shaheen Bagh, Kejriwal had said if a visit by him could have ended the stir, he would have ended it in five minutes.

For those tracking the growth trajectory of Kejriwal, the image of him cuddled up in a quilt on a mattress staging a dharna outside the Rail Bhawan will still be fresh. Or the one where he and his comrades staged a sit-in at Raj Nivas. This was during his 49-day stint as Delhi CM in 2013.

Kejriwal's disagreements with then Lieutenant Governor Najeeb Jung were loud and vocal, and an impulsive response to his demands not being heeded was a dharna or a strike. As a result, Kejriwal and his AAP government came to be known as "good at activism but bad at governance". 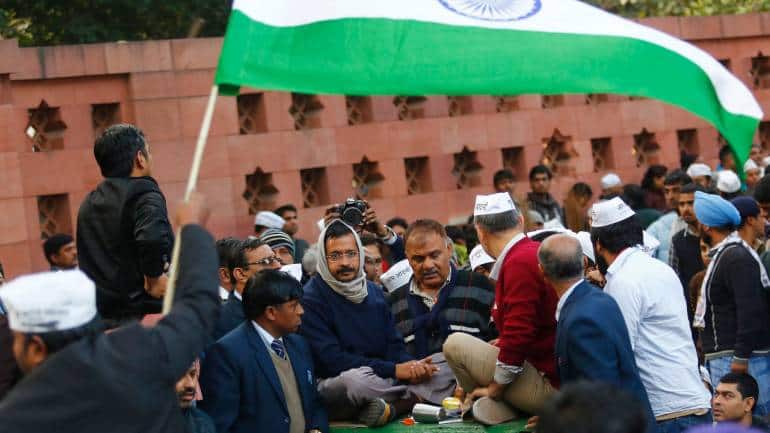 This became clear in the 2017 municipal polls, where AAP faced a crushing defeat against the BJP.

Not getting drawn into anti-CAA protests and rather diplomatic statements on violence at the JNU campus, and alleged police excesses on students at Jamia Millia Islamia University, is seen as Kejriwal's attempt to cleanse that very reputation.

The Kejriwal of 2014 would have attacked the Home Ministry for the above, but the Kejriwal of 2019 "condemns violence", appeals to people to "maintain peace" and "writes to the Lieutenant Governor (LG) and Home Minister" for restoring law and order and setting up of a probe.

Ahead of the elections, Kejriwal and his party have seemingly gone through an image makeover. Kejriwal, who has been captured by camera persons as being in a grumpy, morose mood, projecting his discord with the LG and the Centre in his body language and demeanor, is seen smiling, often a bit too much this time around.

A report by The Indian Express suggests that photographers have been asked to click pictures of him smiling, for hoardings, pamphlets, and upload only those on social media. Even while recording interviews, an otherwise tensed Kejriwal breaks into a smile as soon as recording starts.

Besides, the leader is now being projected as "the son of the soil", "the elder son" or the "elder brother" for Delhi's electorate. This is evident from the pictures shared by him, and his wife Sunita Kejriwal, praying during Lakshmi Puja with his family, and even filing nomination papers.

Happy Diwali from all of us! pic.twitter.com/urkkauAvP5

In this process, the Kejriwal, who started his career as an activist, a protestor, who was seen attacking Modi, badmouthing corporates, burning electricity bills is gone; and a mild-mannered, calm establishmentarian has risen from his ashes.

On the right side of BJP

Kejriwal has been playing a precarious balancing act to avoid being trapped into pre-determined labels – something that his supporters see as political dexterity; while his critics brand as hypocrisy.

This could have something to do with the poor show in the 2019 Lok Sabha elections, where not only did AAP not win a single seat, but it was also pushed to the third place in five of the seven parliamentary seats.

The run-up to the Lok Sabha polls saw Kejriwal raising the plank of granting statehood to Delhi, attacking the Modi and Shah as a “dangerous duo”, even infamously calling the prime minister a “psychopath”.

However, in the rallies ahead of Assembly polls in Delhi, Kejriwal not only refrained from criticising Modi, he also maintained radio silence on statehood – an acceptance of the day’s political reality that attacking Modi ad hominem will not translate to votes, and consequently he shouldn’t project the fight as one between him and PM Modi.

Besides, Kejriwal “supported” the Centre’s decision of abrogating Article 370 as well as the bifurcation of Jammu and Kashmir into Union Territories. He welcomed the Supreme Court’s decision paving the way for a temple at Ayodhya.

In fact, he was the one of the first people to brand the Citizenship Act as “anti-poor” rather than anti-Muslim after having voted against it in Parliament.

Recently, he was even seen defending Modi in his tweets:

Experts see this as Kejriwal’s attempt of keeping national issues at bay, and focussing only on local issues of water, electricity, transport, education and health – fighting the current battle like mayoral polls, mothballing the party’s national ambitions.

This could also be an attempt to keep the fight open-ended, in case the results (scheduled to be declared on February 11) lead to a hung Parliament and/or witness the need of a kingmaker.