By-election in Ellenabad is a test of farmers' ballot power

Haryana assembly constituency Ellenabad goes to by-polls in the shadow of the farmers’ movement and is seeing a triangular contest between the BJP, Congress and Indian National Lok Dal.

Pawan Beniwal quit the BJP in April 2021. He is the Congress' candidate in the Ellenabad by-election.

Ellenabad: All eyes are on the October 30 by-election in Haryana's Ellenabad constituency, which has become quite a matter of prestige for the three main political parties in the fray—the Bharatiya Janata Party (BJP), currently in power in the state and at the Centre, the Congress and the Indian National Lok Dal (INLD).

The biggest and most emotive issue in the election is the farmers’ agitation sparked by the passage of three contentious farm laws in late 2020. Haryana’s farmers are among those taking an active part in the movement and resentment has been brewing in the state against the BJP.

Also read: In-Depth | One year later, where are the farmers’ protests headed?

Whether the saffron party wins or loses Ellenabad will not affect Haryana’s Manohar Lal Khattar government, but the election has become a prestige issue for the BJP, and the state machinery is employing its full force to win the seat. For Congress and INLD, the by-election has become a question of survival with dignity.

A total of 19 candidates are in the fray, of which 11 are independents, but the main contest is believed to be between the INLD, Congress and BJP.

The political atmosphere in the state is already charged.

Among the heavyweights is INLD’s Abhay Singh Chautala, who resigned from the Haryana Assembly early this year in protest against the farm laws. Taking him on from the Congress is Pawan Beniwal, while the BJP has fielded Govind Kanda after inducting him into the party.

Traditionally, the Ellenabad seat in Sirsa has been the stronghold of former Deputy Prime Minister Chaudhary Devi Lal. Abhay, his grandson and son of the former chief minister and INLD supremo Om Prakash Chautala, was victorious here in the 2019 election when he defeated Beniwal, then in the BJP.

Abhay’s resignation from the seat is what led to the by-election here. While he is standing again from the INLD, his rival Beniwal switched to the Congress a few days before the announcement of the date of the election.

All parties campaigned diligently for their candidates from village to village, though flags and banners are not visible due to the fear of the Election Commission. In his rallies, Abhay campaigned against the agricultural laws and alleged scams during the rule of the Khattar government in Haryana, while Beniwal spoke about the lack of development in the state. BJP's Kanda assured the electorate of all-around progress.

Former chief minister Chautala is not leaving any stone unturned to ensure his son Abhay's victory. He is visiting dozens of villages every day seeking support. On the other hand, the entire Haryana government is working to take BJP candidate Kanda to the finish line. State BJP president Om Prakash Dhankar, all ministers, MLAs, and chairmen of Khattar government corporations and boards are scouring the villages of Ellenabad in their bid to win.

In the Congress, too, leaders including state president Kumari Selja and former Haryana chief minister Bhupinder Singh Hooda are making efforts to ensure a victory.

All three candidates have their pros and cons.

The Ellenabad seat has long been dominated by the Chautala family, and in 11 of 15 previous elections, a member of the family or a candidate of their choice has won.

Chautala had then also won from Uchana; he resigned from the Ellenabad seat, and in the 2010 by-election, it was won by Abhay.

In 2014 and 2019, Abhay won again by defeating Beniwal. Now Abhay is in the fray here for the fourth time and is confident of the support of the farmers and Jats who are agitating against the BJP government. 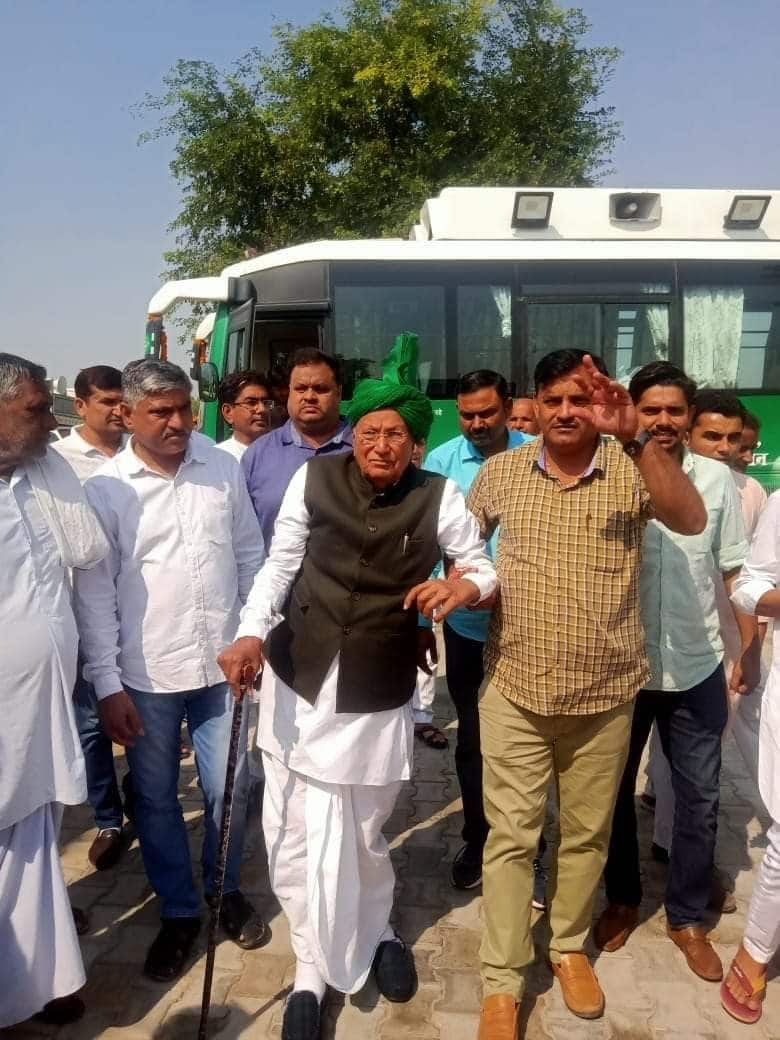 Yet, the challenges before him are not unsubstantial.

By winning from Ellenabad in 2019, Abhay was able to register his presence as the lone MLA of INLD in the 90-member Haryana Assembly, all thanks to infighting in the Chautala family.

One of Abhay’s rivals has turned out to be his own nephew, Dushyant Chautala, son of Omprakash Chautala’s elder son Ajay. Dushyant is currently the deputy chief minister of Haryana—a post he got by forming a joint government with the BJP on the strength of ten MLAs from his Jannayak Janata Party.

Abhay has to thus face not only the Congress and BJP candidates, but also the supporters of his nephew, a participant in the rival Khattar government. If Abhay wins, then it will give new strength to INLD in Haryana. But in case of defeat, the future of the party will be in question.

There are also strengths and weaknesses associated with Congress's Pawan Beniwal.

In Ellenabad, Beniwal's uncle, former MLA Bharat Beniwal, had been contesting elections on a Congress ticket. But this time, the party gave his ticket to the nephew—which did not go down well with Bharat. The Congress high command has so far persuaded Bharat to remain in the party fold, but fears of rebellion remain.

On the pro side, Pawan Beniwal’s biggest advantage is that he is a Jat and the Congress is banking on him to get votes from the farmers as well as the Jats. The majority of Ellenabad’s nearly 2 lakh voters stay in villages, and according to estimates, 37 per cent of voters are from the Jat community, with Jat Sikhs making up 7 per cent of the voters. 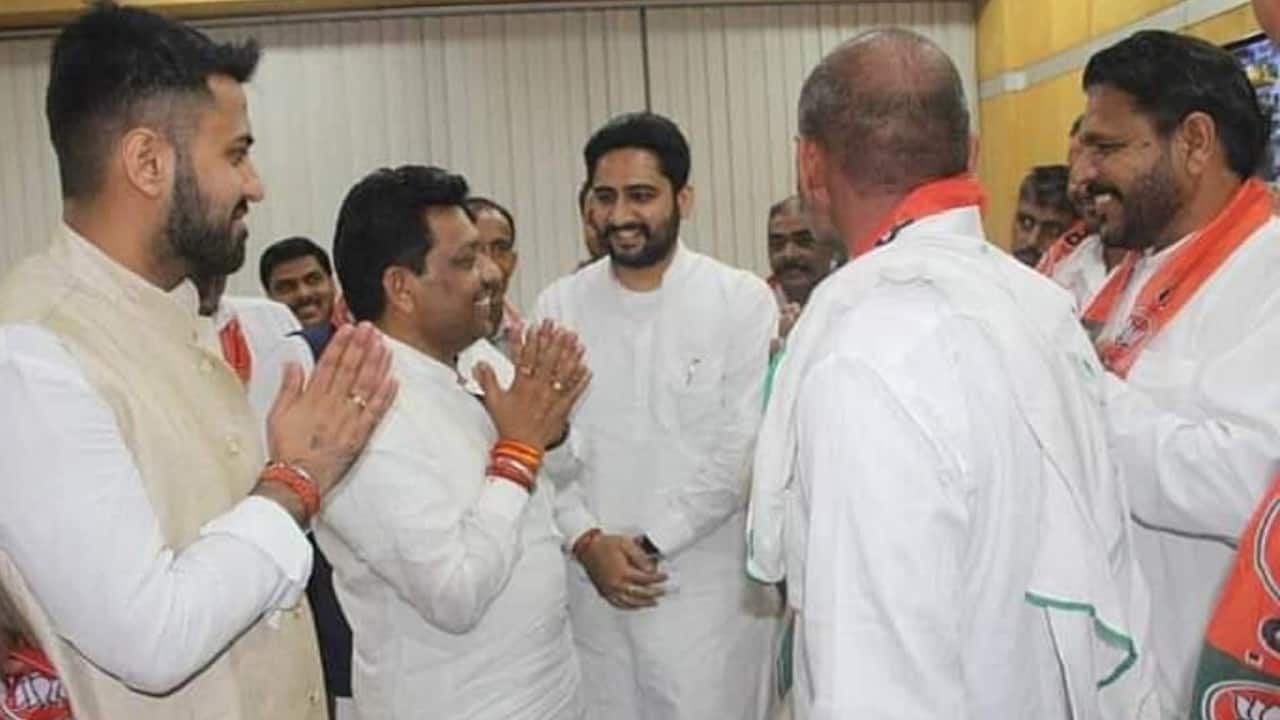 The BJP has fielded Govind Kanda for the Ellenabad by-election on October 30, 2021.

The BJP in Ellenabad is facing the displeasure of farmers, who threw out party candidate Kanda and other leaders from the local gurudwara. Even in villages, farmers are raising slogans against the party. The Samyukt Kisan Morcha has taken out a Kalash Yatra with the ashes of the farmers killed in Lakhimpur Kheri to different villages in Ellenabad. So the farmers are leaving no stone unturned to make BJP's path to victory here difficult.

The majority of Jat votes are likely to be divided between Abhay and Beniwal. In such a situation, the BJP is trying hard to get its candidate to win by mobilising non-Jat voters. Govind’s elder brother Gopal Kanda, former Minister of State for Home in Haryana, has also come on to the campaign ground with full strength.

Palaram Jat, a farmer from Dholpaliya village, said the farmer agitation will certainly have an impact on the Ellenabad by-election. In this case, Abhay has the upper hand, as he resigned from the assembly in protest against the agricultural laws.