The money cycle and India’s road to prosperity

Money creation alone is unlikely to solve our many problems. We crucially need domestic output and domestic jobs alongside that at least matches domestic demand

India has always had the key ingredient for achieving sustained economic growth – an aspirational and capable population. However, economists now seem resigned to bringing down estimates of India’s potential growth rate. Where have we faltered?

In this note, we present the ideal monetary-economic cycle that should lead us to prosperity. We will start with money creation, follow it into consumption and investment, on to jobs, output, trade and inflation. We will look at where this cycle has stuttered in the past, to draw lessons for the future.

Specifically, we consider the question – will putting money in people’s hands help us dig our way out of the current predicament?

By ‘money’, we refer to money supply ‘M3’, or the sum total of currency notes and coins in circulation, alongside deposits in banks.

In India, incremental M3 is created through one of three routes. First, from net foreign currency inflows. Second, from net increases in bank loans. Third, through net government expenditure financed by banks or the Reserve Bank of India (RBI).

Incidentally, an increase in precautionary savings does not create fresh money. Likewise, government spending that is financed by taxes or by direct borrowings from the people does not create net new money.

When money circulates, economic activity ensues in the form of consumption, production, savings, investment, or exchange of assets.

All else being equal, the more the quantity of money, the more the economic activity. True enough, the table below shows good correlation between India’s M3 growth and nominal growth in capital formation (investment), and some correlation between M3 growth and nominal growth in consumption. Admittedly, there is an interplay of many other variables here, but that does not detract from our broad inferences. 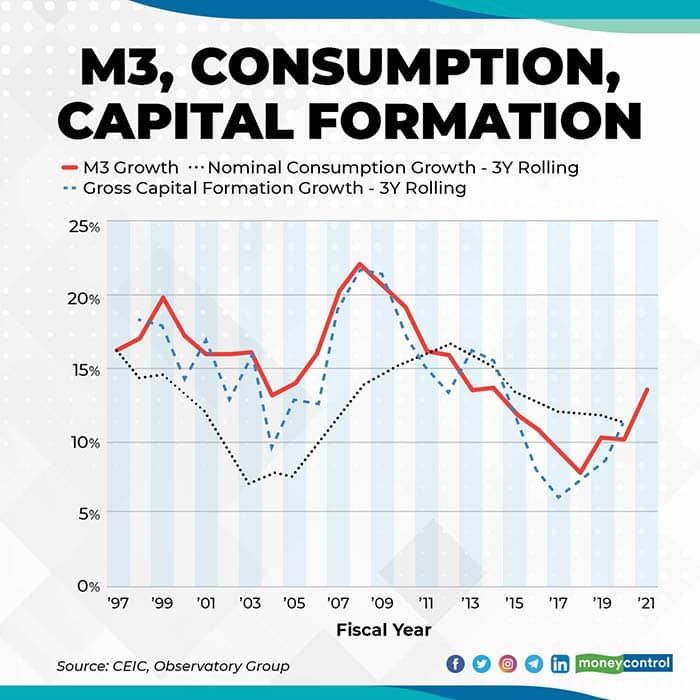 The Monetary-Economic Cycle In Utopia

In a virtuous emerging market monetary-economic cycle, the growth in domestic consumption is at least matched by a similar increase in domestic production.

Indeed, if like China, a country can consistently produce more than what is required for domestic consumption and export the balance, then the cycle can sustain high growth and job creation.

On the other hand, if the domestic economy fails to produce enough to match domestic consumption demand, then one or both of two aftereffects will follow. One, there could be too much money chasing too few goods, and inflation could ensue. India’s high protein inflation during FY09 to FY13 could be one such example.

Two, the gap between domestic consumption and production could draw in net imports. Ideally, a weakening currency should be a self-correcting mechanism, reducing imports and spurring domestic production. However, this can be complicated if the trade imbalance is overwhelmed by capital inflows – particularly ‘carry-seeking’ reversible flows.

The table below charts India’s annual growth in domestic consumption since FY97, against India’s net goods and services trade deficit as a percentage of annual consumption. It tells a crucial story. 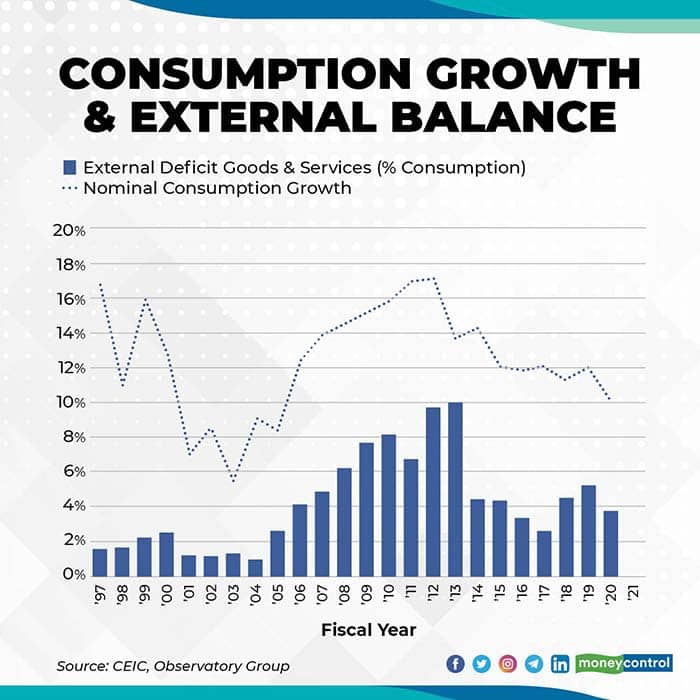 Even after normalising for crude oil prices, the broad correlation of in the above table holds. India net imports spans sectors such as electronics, plastics, chemicals, fertilizers, and intermediary goods across industries. It is weighed by consumption items, rather than capital goods.

India has struggled to grow domestic production to match domestic consumption. We have instead net exported jobs and net imported goods and services. This has caused the breakdown in our monetary-economic cycle.

To put India on a sustainable monetary-economic cycle, it may not be enough to put extra money in people’s hands. We have to address domestic output and job creation in India.

The table below puts together the trends in India’s money growth, consumption and inflation. 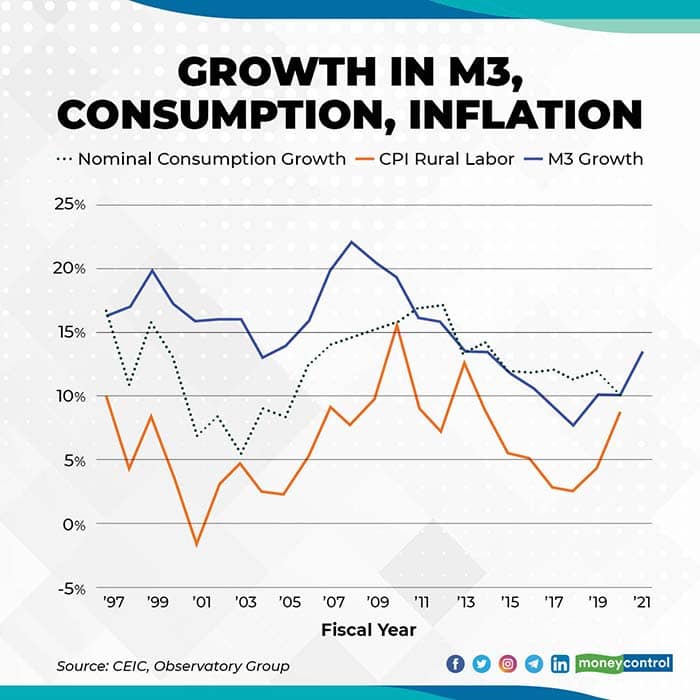 It suggests that given our inability to create sufficient domestic output, a rise in M3 and domestic consumption risks inflation. Crucially, while economic activity has collapsed amidst the ongoing Covid-19 crisis, M3 is moving up again, backed by net currency inflows and a sharp rise in government deficits. This does not bode well for our macroeconomic future, when we emerge out of Covid-19 and consumption reverts.

The Answer Is Jobs And Output

Our inability to foster domestic output and jobs, and the consequent break in the monetary-financial cycle, is the root of our macroeconomic ills. It raises the risk of inflation and external imbalance. It suppresses our growth potential. It reduces the government’s tax revenues, hence risking fiscal imbalance.

The answer to repairing the cycle does not lie in monetary or fiscal Excel spreadsheets. It lies in real economy reforms to facilitate job and output creation in India.

Prime Minister Narendra Modi’s call for an ‘Aatmanirbhar Bharat’ echoes this objective of creating domestic output and jobs. For now, officialdom is tying itself in knots explaining how this is different from our past failed experiments with import substitution. When clarity on a medium-term framework emerges, I hope it encompasses the following four key elements.

First, a comprehensive solution to our extremely stressed financial services ecosystem, which currently lacks the ability and willingness to fund our growth aspirations.

Second, a set of solutions that durably address issues around stressed sectors such as real estate, power, telecom, airline and shipping, and micro, small and medium enterprises.

Third, and crucially, reducing ‘regulatory cholesterol’ as Manish Sabharwal puts it, and addressing issues around land, labor, laws, contract enforcement and policy stability, that come in the way of investments, output and job creation.

Finally, investments into healthcare, nutrition and education for our children. These are the tools that will best equip them to tackle an extremely uncertain future.

Executing all this will be anything but easy. However, many sectoral experts have provided detailed prescriptions around how each of these may be achieved. They now have to be empowered by both the political leadership and the bureaucracy.

In summary, money creation alone is unlikely to solve our many problems. We crucially need domestic output and domestic jobs alongside that at least matches domestic demand. This calls for addressing tough real sector issues – there are no ready short cuts here.