While optically, the aggregate earnings may not appear as a shocker, it nevertheless hides underlying weakness and a clear loss of momentum.

Caught between demonetisation and GST, the Indian corporate sector had a tough start to the fiscal year as is evident from the first quarter’s report card. While optically the aggregate earnings may not appear as a shocker, it nevertheless hides underlying weakness and a clear loss of momentum.

The fittest survived and the ones staying above water are running a tight ship. Markets would like to blame recent correction on geopolitical tensions and Sebi’s action on 'shell companies'. However, as the saying goes, markets are slaves of earnings, hence this is the indicator that they cannot be ignored. If the second half of FY18 doesn’t bring the mojo back to earnings, the next leg of rally will have to wait longer. Nifty protected by few strong ones

Going strictly by statistics, the weighted average Nifty earnings so far have grown by 12 percent. However, the aggregate absolute earnings have declined. As the numbers suggest, despite a higher growth in sales, operating profit de-grew, thereby pointing to margin pressure, probably coming from input prices that couldn’t be fully passed on amid the overall weak sentiment.

The weighted average Nifty earnings have been protected by the good performance of two heavyweight sectors namely financials and oil & gas that usually houses the leaders of the likes of  HDFC Bank, IndusInd Bank, Kotak Bank, etc. While companies like Tata Motors and State Bank of India reported optically exciting numbers - for the auto manufacturer it was a one-time gain and for the banking bellwether it was lower provisions that masked the underlying weakness. Interestingly, if one were to look at Nifty earnings ex-financials, the numbers look worse. 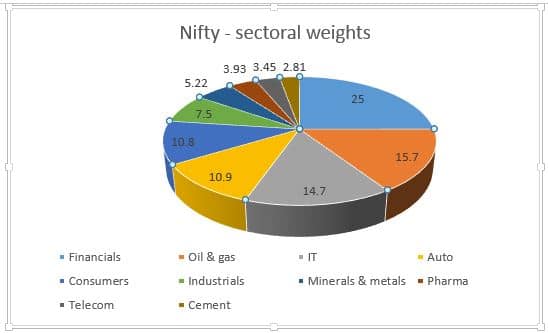 In the large cap universe there were some discerning sectoral trends – pharmaceutical companies had a very difficult quarter, weighed down by GST de-stocking and US generics pressure. GST and raw material prices negatively impacted earnings of tyre companies. Micro finance companies too have not yet come out of demonetisation crisis, compounded in recent times by the “moral hazard” of farm loan waiver. Consumer-facing businesses like staples, consumer electronics and electricals all bore the brunt of GST. 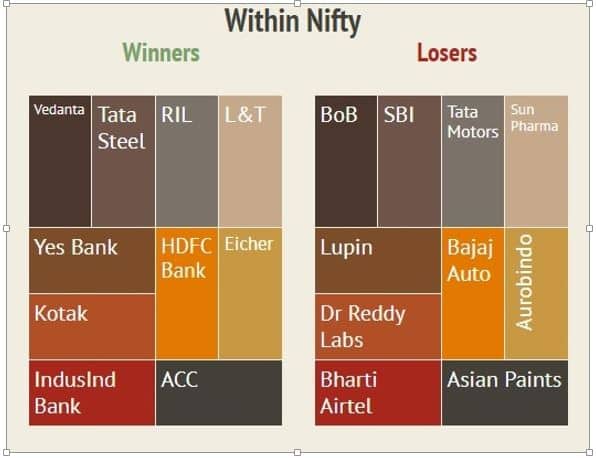 However, retail sectors and jewellers fared better partly due to the pre-GST sales and their own unique initiatives. While GST cast its shadow on most India-linked businesses, some of the men like Interglobe Aviation, Bajaj Finance, domestic equity brokers like Edelweiss/Motilal, Container Corporation, Bharat Electronics, L&T Finance, Dalmia Bharat, Century Textiles etc stood out, underscoring the pivotal importance of stock picking in investments. What was disconcerting was the loss of earnings momentum in the broader market. Our analysis of over 2000 companies suggests that while the performance snapshot looks similar to their large-cap counterparts, earnings quality is weakening. In the quarter gone by, the number of companies reporting losses have actually gone up from 624 (Q1 FY17) to 639. Incidentally, the number of companies reporting over 10 percent growth in profitability has also fallen from 837 to 781. A closer look at the BSE500 aggregate suggests that while topline growth has not faltered much, operating profit has shrunk. However, the bottomline didn’t deteriorate as much on account of lower interest costs.

The saga of margin compression is evident in the mid-cap universe as well. The consumer-facing businesses had a particularly challenging quarter. Hence, the BSE Midcap index posted a poor show with lower growth in topline, sharp decline in operating profit and a big contraction in overall profitability. 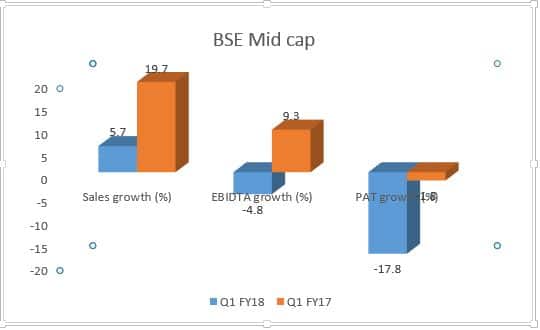 Finally, of great interest to investors at large is a deep dive into the smallcap universe. Here again the headline number concealed the underlying deterioration. While on an aggregate basis, numbers appear not to have weakened significantly, but earnings quality has. As against 80 and 77 companies that reported losses respectively in the year-ago and previous quarter; in the quarter gone by, the number has jumped to 88.

So the aggregate show clearly was protected by a few outliers. This is clearly evident from the fact that while close to 253 companies reported earnings growth in excess of 10 percent in the year-ago quarter, that number has fallen steeply to 190 in the latest quarter gone by.

But the moot question is, does Q1 18 results matter?

It does matter as any growth market is driven by earnings growth. However, not all is not lost for India Inc. Most corporates are guiding to a better second half of FY18. They are highlighting gains for organised sector due to GST and better outlook for global growth as probable tailwinds. But let us not forget that the proof of the pudding is only in eating. So investors got to monitor earnings closely.

The headline index is not particularly cheap at 19.5X FY18 projected earnings. In the near-term, markets might keep hopes of revival in the second half alive and not correct significantly on this count. But any escalation of political tension in our borders or globally will bring the valuation argument back. With few good men continuing to support earnings, too much liquidity will continue to chase too few good companies. Thus, valuation may remain at elevated levels making the task of finding growth with value, a lot more difficult, going forward.
Tags: #moneycontrol analysis #Result Analysis
first published: Aug 14, 2017 08:02 pm