Petronet LNG (PLNG)  reported yet another strong quarter on the back of a strong volume uptick. Revenue at Rs 7757 crore was up 23 percent year on year (YoY) while net profit saw a significant 33 percent uptick. Operating profit increased by 47 percent, resulting in a 1.3 percentage point operating profit margin expansion. The company was also able to substantially reduce interest cost by almost 29 percent.

Despite the restart of the Dhabol terminal post monsoon, the Dahej terminal reported a strong LNG offtake at 215 TBTUs, an uptick of 2.4 percent QoQ (quarter on quarter). With 113 percent utilisation at the Dahej terminal, the company reported highest ever total volumes at 223 TBTUs.

Higher volumes led to higher PLNG profitability with efficiency gains and margin improvement. The realisations, however, were offset to some extent due to lower blended tariffs and a forex related loss of Rs 22 crores.

The company is planning an expansion of 2.5 MTPA at the Dahej terminal, which is expected to get completed by June 2019, post which another significant boost to the volume and offtake is expected.

The company has also increased LNG tariffs from January 2018. Which are expected to boost realisations in Q4.

PLNG is also in the process of building a tank at the Dahej terminal which would cost around Rs 600 crores. Although this tank would not result in any incremental capacity, it would help to streamline and regulate the operations and off take.

The Kochi terminal reported a 20 percent sequential decline in volumes. This was mostly attributable to the scheduled annual shutdown of FACT plant from November 2017. The plant is scheduled for a restart from April 2018 post which Kochi volumes are expected to improve.

Despite some local protests, GAIL’s Kochi-Mangalore pipeline project is progressing as per schedule. Around 150km of the 300km pipeline has been welded and the pipeline is expected to get commissioned by 4QFY19. Post the completion of the pipeline, the Kochi terminal is expected to run at better utilisation and start contributing significantly towards volumes. Approximately another 1MT by MRPL, OMPL and Mangalore Chemical and Fertilizers Ltd should be a part of the planned off take. 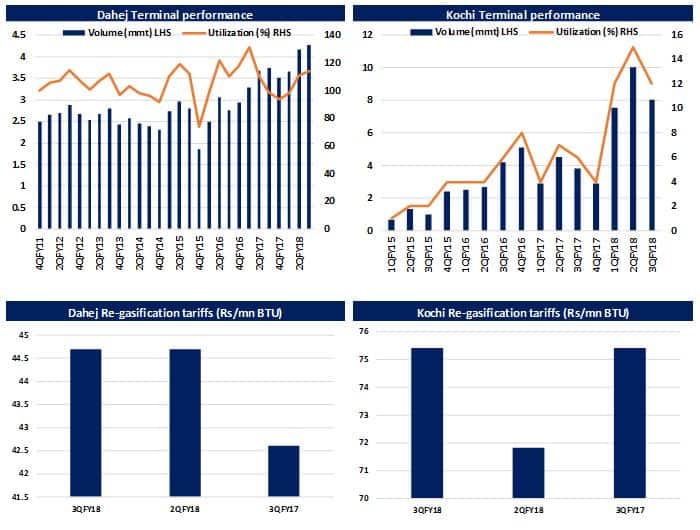 The Mundra terminal is expected to commence operations by the end of FY18. The management at PLNG does not expect any impact on volumes once the Mundra terminal starts operations because of their contracts with existing customers and also because of the low-cost advantage of the Dahej terminal. Given this the volumes are expected to remain high along with high utilization levels at the Dahej terminal.

The company is in advance talks with the Bangladesh (7.5MT land-based re-gasification project) and the Sri Lanka (2MT Floating Storage Regasification Unit where PLNG will have 47.5% stake) governments to set up regasification terminals there. Although the timelines are not clear and only limited planned capex for the year for now (FY18/FY19 capex to be limited to Rs 2/4 billion), we expect this to bring in good diversification benefits in the long term.

The company has reported a strong volume uptick along with an EBIT CAGR of 51 percent in the last two years. The net profits have increased at a CAGR of 40 percent.

With the government’s sustained push to move towards cleaner fuels we see the demand for LNG to remain strong. With planned expansion at Dahej and the benefits of pipeline work at Kochi, we see utilization and off take to enhance further over the coming quarter. Keeping these in mind we expect sustained operational efficiency and stay positive on the stock. We see the stock as a good buy at current levels.