Mutual funds have been chasing risk even in funds meant for low-risk conservative investors.

‘Repeat a lie a thousand times and it becomes the truth’, is a saying often attributed to Joseph Goebbels, Hitler’s minister for propaganda. Fund houses and distributors have never tired of telling us that debt funds are safe, they offer better returns than fixed deposits (FD) and give us tax advantages too.

But in the last few months, this notion has come under severe attack. While fund houses have conveniently pushed the can further down the road, investors are left wondering: are debt funds really safe?

After a recent sharp fall in share prices of Zee Entertainment Enterprises, Dish TV India and certain Anil Dhirubhai Ambani Group companies, mutual funds that had lent to their promoter companies against shares have come under fire for giving them a lifeline.

As per the lending agreement, they ought to have actually demanded compensation and/or have gotten out. Fund managers argued that dumping of shares would have further taken the share prices down and everyone would have lost. Shareholders of these listed companies would have lost, debt funds may not have realized their full amount, and debt fund investors also would have incurred a loss.

The Securities and Exchange Board of India was said to have been furious with this arrangement but so far has neither given its blessing nor has it condemned it. But what if the borrower fails to pay up at the end of the agreed period? What about the investors who come in now into the schemes?

In the interim, as if all this was not enough, Dewan Housing Finance Corporation’s (DHFL) share price has also been falling since the IL&FS crisis broke out in September. A hike in its borrowing rates following the liquidity crunch after the IL&FS crisis, coupled by allegations of siphoning of funds made by an online investigative portal, spelt bad news for the group and debt funds that had lent to it. DHFL, too, was downgraded.

Did the plan work? ZEEL and Dish TV shares are up back to where they were before their 25 January crash.

So did the fund houses do the right thing? After all, debt funds that try and predict interest rates go wrong as well, especially those dynamic bond funds that went horribly wrong in the past. Government securities are safe but a portfolio full of them renders the debt fund volatile.

What are the options then? Follow an accrual strategy where debt funds lend to corporates and aim to earn a regular income? And brave the credit rating turbulence, if any, once in a while?

Should fund managers be given a bravery medal? Certainly not. They messed up. Here’s why:

A credit fund is expected to take credit risks. Its strategy is to invest in weak credit rated, but typically well-managed companies or those with earnings visibility, and hope for the company to pay its interest and principal in time. Such companies earn higher yields to compensate for their weak credit rating. But fund managers got greedy. They wanted a piece of credit action even in low duration and short-term funds that are essentially meant for low-risk investors. Not just that, debt funds also invested in riskier structures like loan against shares (LAS) where a holding company either borrows money to increase its own shareholding in its listed entity or uses the borrowings to invest in other businesses, often unrelated.

In other words, securities that were invested in credit risk funds also found their way in other low-risk funds. That’s a cue to the Securities and Exchange Board of India (Sebi) to revise their product labelling, given that mutual funds have been found to chase risk even in conservative funds meant for conservative investors.

But why chase risk? The simple answer is to offer attractive returns; risk measures be damned. According to Morningstar, the average yield to maturity of debt funds went up to 8.41 per cent by the end of September 2018, up from 7.09 per cent at the end of December 2016.

To be sure, credit risk funds are expected to invest in high yielding securities that usually come with low ratings. The YTM (yield to maturity) of these funds had risen to 10.08 per cent by the end of September 2018, up from 8.99 per cent in December 2016. But short-term bond funds, low duration funds and liquid funds also increased their YTMs on an average in this period (see table). A high YTM gives high returns, but also comes with higher risks. 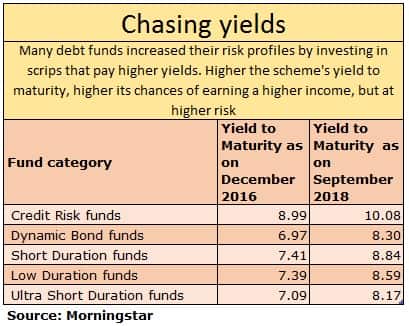 Apart from credit risk funds, some of the worst offenders in accumulating risks are fixed maturity plans (FMP). These are 3-4 year closed-end schemes that aim to give you a higher tax-efficient yield. But because they restrict redemptions, many FMPs invested in LAS and other high-risk debt paper or structures in the hope of earning higher returns.

Twelve of UTI Asset Management Co Ltd’s FMPs and 17 of Reliance Nippon Life AMC’s FMPs have invested in ADAG companies. To be sure, debt funds are eligible to take risks like all mutual funds. But an FMP taking a credit risk is different from a credit risk fund taking credit risk. In the initial days, an FMP was considered to be ideal for first-time investors who are migrating to mutual funds from bank fixed deposits.

The one fund house that refused to take losses on its books and instead chose to pass it on to investors was Mirae Asset Global Investments (India). Its investors were upset and the fund house took years to recover. But Mirae had done the right thing. Had other fund houses also done a similar thing back then, perhaps investors would have better understood the risks associated with mutual funds.

Considering the current size of the debt schemes and the exposure to some of these corporate houses, no AMC will be able to absorb any of these papers.

Are debt funds to be avoided, then?

Not at all. Risk is not bad. A variety of funds is needed, including credit risk funds. There are investors out there who do not mind taking risks. What’s also needed is for fund houses to articulate and explain the risks that each of their schemes carry, and make sure to attract just the right kind of investor for them.

This way, we know what to expect, and disappointments are avoided or at least minimized. At the same time, risk mitigation should be achieved by diversification and maintaining exposure caps to corporate houses across the companies they own. And, of course, product labelling needs a review.

(Please note: This story was originally published on February 19, 2019, and has been updated in the wake of Franklin India Templeton crisis)