Market to remain range-bound; IT stocks to remain under pressure

IT stocks continue to remains under pressure on back of talks of re-introduction of immigration bill which proposes to increase wages from USD 65,000 to USD 100,000.

IT stocks continue to remains under pressure on back of talks of re-introduction of Immigration Bill which proposes to increase wages from USD 65,000 to USD 100,000. While management of all top IT companies have ruled out the negative impact due to shortage of skilled workers in the US, we believe stocks are likely to remain under pressure until more clarity emerges.

TCS reported strong earnings and business momentum remains intact. However, Infosys delivered weak performance marked by weakness in top accounts which cast a shadow on future performance. Results season started on a positive note with Indusind Bank reporting strong performance with beat on all fronts leaving behind the impact on demonetisation.

While the advances growth was strong at 25 percent, core profitability (core operating profit as percent of average assets) remains best in the industry at 3 percent vs 2.5 percent for industry. We continue to remain selective in the space and prefer banks with balanced mix of retail and wholesale financing with relatively stable asset quality.

Further all steel companies have reacted positively on back of cut in output by China which is likely to benefit Indian steel industry to some extent as India is the third largest steel producer.

Newly elected US President-elect Donald Trump in its first news conference targeted pharmaceutical industry and specified that industry is going to come back to US and need for creating new bidding procedures. We believe pharma stocks are likely to remain under pressure till more clarity emerges on this front.

On macro-economic front IIP grew faster than expected while inflation was in line leaving hardly any scope for rate cut in February 2017. Consumer price index (CPI) eased to its 25-month lowest level of 3.4 percent in December 2016, lower than our expectation of 3.6 percent and market consensus of 3.5 percent. Separately, the index of industrial production (IIP) posted 13-month highest growth of 5.7 percent YoY in November 2016, slightly better than our expectation of 4.4 percent YoY and much higher than consensus of ~1 percent.

Ensuing fortnight will see meaningful Q3 FY17 earnings which remain the key monitorable and likely impact of demonetisation and management commentary will be key to watch out for. While the individual stock performance is based on Q3 FY17 earnings, we believe overall markets are likely to remain range bound as market will closely watch the Union Budget. 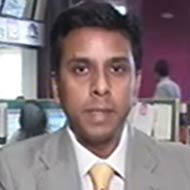