India’s fight against Covid-19 is on the right track

The fight against the novel coronavirus Covid-19 has gripped the entire world. The strategy for fighting this virus, which originated from China, has varied from country to country. A pandemic at this scale is something no country could have prepared for, and that is why many countries have been found wanting in their response. This is the reason why protocols for first containing the spread and then dealing with the actual cases have been evolving on a continuous basis.

In India, on March 19, the Indian Council of Medical Research (ICMR) released the results of 826 random trials for suspected Covid-19 on people suffering from acute respiratory illness. All the tests results came in negative, thereby ruling out evidence of a community spread. However, community spread could still take place and extreme caution needs to be maintained. The ICMR will continue to randomly test for evidence of community spread.

Various countries have adopted different models to detect and contain the virus. Extensive testing seems to be one method, adopted by South Korea. Social distancing is another method as practiced in many countries which initially ignored the warning signs but later scrambled to contain the spread. China, which has been accused of not being forthcoming with information, has practiced its own methods — some of which are draconian.

What has been India’s approach? The Union government’s response has been very proactive and is ahead of the curve. It started with the aggressive screening of inbound passengers — so far the carriers of the virus.

The health ministry issued its first notification for screening of all passengers coming from China on January 17. The protocol was continuously reviewed and new measures were added almost every few days — from cancelling of e-visas, to placing of thermal scanners at airports and seaports, to cancelling existing visas (except diplomatic and official), to cancelling OCI cards to restricting entry of anyone from the EU and the UK to closing land borders with our neighbours to mandating a 14-day quarantine for travellers arriving from countries which have shown high number of cases.

The next safety ring around these above measures has been to identify and isolate all those who may have come in contact with those suspected of infection or who have returned from a foreign trip.

Evidence shows that this aggressive screening has so far restricted the virus in India to Stage 2 (foreign travel history and contacts with them) from locally spreading. Aggressive measures taken by state governments for social distancing — which includes shutting down public spaces, work-from-home options, closing schools, malls, cinema halls, pubs, gymnasiums, etc — has worked in checking the spread. 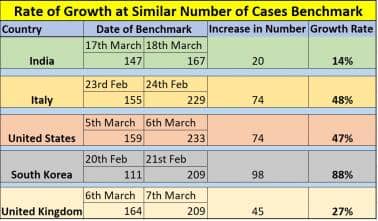 The graph above compares the rate of growth of confirmed cases at similar-number-of-cases benchmark. At a 100-plus cases benchmark (different countries reached this benchmark at different times), the growth rate of new confirmed cases in India is significantly lower than that of other countries which are similar to us — open societies, democracies and with a robust press and free flow of information. 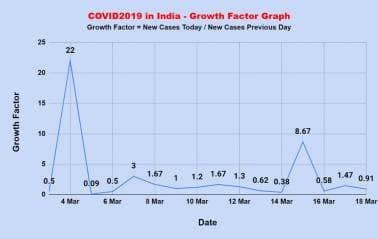 The graph above plots the date-wise growth factor, which is new confirmed cases added in 24 hours to the figures the previous day. A growth factor significantly higher than 1 means the virus is spreading exponentially, while the growth factor hovering around 1 or below indicates the reverse. Between March 4 and 18, the growth factor has largely hovered around 1, with rare exceptions.

Both the above graphs lend credence to the ICMR confirmation that so far there is no evidence of community spread.

Some have suggested that the relatively low number of cases could be a result of deliberate under-reporting. This is highly unlikely. Patients reaching out to doctors, their contact tracing, their testing, data collection and all such efforts are being led at the district-level by different state governments. It would stretch credulity to argue that the entire machinery from local administrations to state governments (including those headed by non-NDA parties) have come together in a grand conspiracy with the central government to under-report data.

Even if the ‘deliberate under-reporting’ theory was to be believed, how does one explain why we are yet to hear about surges of cases from any hospital across the country? In a country like ours, where there is a free flow of information and an active social media, can such a surge be kept under wraps?

However, this is not the time to rejoice or be complacent. The government needs to be extremely vigilant, and keep ahead of the curve as it seems to have done so far. This would mean continuously evolving protocols, reacting in real time and taking all means necessary to prevent community spread. This would also mean co-operation of people in following government orders. Many states have already banned large gatherings and imposed restrictive orders. These would need to be strictly adhered to, without leeway to any special interest group.

The efforts of the Modi-led Centre, along with different state governments and co-operation of every citizen, will help India turn the corner. This is the time to be vigilant.