COVID-19 | Remonetise gold to tide over the economic crisis

The value of gold in India is estimated to be 40 percent of the nominal GDP. Monetising 10 percent of this will ensure a liquidity of Rs 13 lakh-crore, which can be used to overcome the crisis

As the COVID-19 pandemic has pushed global economy into an unprecedented scale of low growth and massive employment loss, the resource mobilisation to revive economic activities is reaching a frantic scale and dimension. In India, the extent of the damage is difficult to ascertain as the rural and informal sectors play a significant role in economic growth.

The government has a herculean task of packaging different essentials and monetary support, with a focus on various segments of society, reflecting the diverse nature of the needs and requirements of the people.

It is worth exploring the possibilities around gold, which is treated as an investment and asset by the majority of Indians. India’s official gold holdings, held by the Reserve Bank of India (RBI), coupled with the private stock of gold in Indian households form a significant resource. With 635 tonnes of official stock, India’s share as a percentage of the total foreign reserve stands at 6.9 percent. Reports have assessed that households in India possess 24,000 tonnes of gold and account for 25 percent of the global market demand. If we consider the per capita possession of gold in addition to the per capita income, India’s total wealth seems to change. Rural India accounts for approximately 60 percent of gold, where people traditionally use it for getting loans from moneylenders and pawnbrokers.

The appetite for gold consumption in India has pushed the government to restrict its import. The balance of payment, at times, is stretched by the higher import of gold. The internal circulation of gold has been restricted, except for sale and exchange through jewellers and informal markets. Even banks have limited options for lending loans against gold on a market transaction basis due to RBI’s restrictive guidelines. This has also limited open and transparent information required for a competitive market. The lack of forbearance and acceptance of gold as a commodity have resulted in bank loans, especially those meant for agricultural farmers, landing in the hands of wrong beneficiaries.

In the last decade, the government woke up to the fact that the domestic possession of gold is not leveraged or used for remonetisation. This led to the introduction of different schemes, such as Sovereign Gold Bond, Gold Coins and Gold Monetisation Schemes (GMS). Unfortunately, none of these schemes achieved the desired results, nor are showing any encouraging trend. The GMS was able to garner only 16 tonnes of gold in the last four years as these schemes are not designed keeping in mind the majority who have the metal.

Gold bond schemes are oriented towards the rich and the investors. On the other hand, there is a poor understanding of bonds and this accentuates the challenges to popularise the  schemes. Gold coins are meant for investors of the higher-order.

The question is how to tap the market potential of gold in these difficult times to support the ailing economy.

The government should declare a liberal gold policy. As per the World Gold Council (WGC), the estimated value of gold in India is 40 percent of India’s Nominal Gross Domestic Product in present value terms. Thus, even if 10 percent of this gold is monetised, it will ensure a liquidity of Rs 13 lakh-crore, which is more than 10 percent of the total budget needed to spend to overcome the crisis.

To improve liquidity in the rural market, gold in the domestic market should be allowed to be monetised. Various mechanisms and channels should be put in place for allowing short- to long-term deposits to avail loans and investments by all sections of society. Those who could access the nearest banks of micro finances (MFs) should be allowed to avail loans without a blanket restriction placed on LTV (Loan to Value).

The obvious risk associated here is that gold loans are exposed to fluctuations in gold prices in the market. An increase in gold prices and a subsequent increase in gold loan borrowings involves the risk of an asset bubble, which may burst when the price trend reverses. This raises the fear of NBFCs facing default. It is, therefore, pertinent to look at the historical figures and the subsequent prudential approach by the regulatory body. 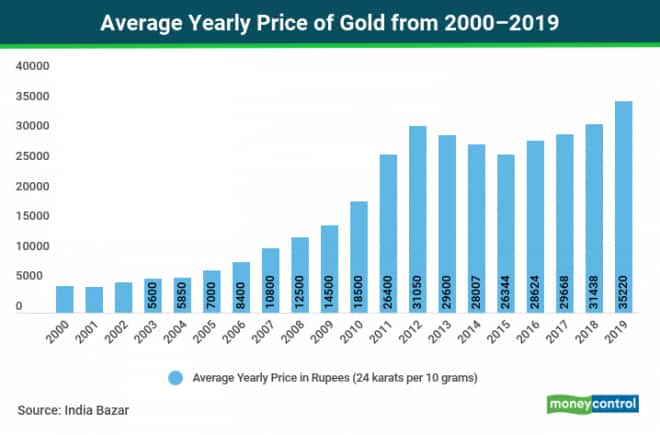 The average price of gold has shown a steady increase in the last two decades with a reversal between 2013 and 2015. Gold prices skyrocketed in 2011 and 2012. Gold financiers expanded their business, as more people pledged gold for cheaper loans. To contain the risk emanating from the business’ vulnerability to price fluctuations, the RBI intervened by capping the LTV ratio to 60 percent.

The prudential approach coincided with a global slump in the price of gold and the combined factors ushered gold financiers into a low-growth phase. The RBI has now revised the LTV from 60 to 75 percent. The cap gives a certain safety margin against the fall in prices, creating creditworthiness in the operations. However, this has also diverted the borrowers from the formal system to the unorganised gold loan market operating without a LTV cap. The fall in lending yields will reduce the profitability of the business.

Considering the fact that the fundamentals of gold remain high and the long-term trajectory continues to show an upward trend, it is good to look at innovative safeguarding practices against reckless lending by encouraging well-capitalised NBFCs to extend credit basis depending on their capacity.

In a liberal market, there are mechanisms to absorb the shocks in price fluctuations. The role played by different players, like banks, NBFCs, MFs, etc. has to be redefined. What is required are more players and enabling a framework for the public to actively participate in the gold market. The gold loan market in India continues to be underpenetrated as a huge quantity of the metal lies idle in households.

The prevailing economic condition will make gold loans more attractive for the borrowers and lenders alike. To reach the right segment and leverage the untapped market potential, there is a need to re-examine the policies and develop gold as an asset class now more than ever.