Central bankers should prioritise growth over their pride

Stop. Look. Listen. Then proceed cautiously. That was the advice we were given as children for crossing the road, and it’s pertinent today for central bankers. After failing to stop consumer prices from accelerating, the risk now is that their pride is dented and they all overtighten to prove their inflation-fighting mettle — pushing us into a deeper recession. Having misread the the global economy for much of the past three years, they should consider pausing their rate increases to avoid compounding the felony.

Federal Reserve Chair Jerome Powell is frustrated that financial conditions are looser than he might wish for despite the fastest monetary tightening since the 1980s. If only bond yields would play ball by staying higher. Restoring inflation-fighting credibility, after an egregiously lax period, is uppermost in central bankers' minds. Their nightmare scenario is if inflation suddenly turns back up again, and the tight labour market drives them nuts. Better perhaps to overdo tightening to preserve credibility whatever the risks to growth, is the current thinking.

The pronounced drop in bond yields since the start of the year is at odds with what policymakers want to see, and is prompting tougher rhetoric on the need for ever-higher interest rates. “At this moment, the risk that we have to manage is the risk that we do too little, not too much,” was how Dutch central bank head Klaas Knot put it in an interview with Italian newspaper La Stampa this weekend. Something will have to give: Either bond markets are getting too far ahead of themselves, or central banks will be persuaded to stop hiking official borrowing costs. Several have already taken their foot off the rate-hike brakes, such as Norway and Australia.
The US yield curve has been inverted since July and the depth of the inversion has increased. That is about as reliable a long-term indicator of impending recession that we have. It's not infallible, but the signal gets louder if it is sustained, as it evidently is, with three-month Treasury bill yields 110 basis points higher than 10-year bond levels. 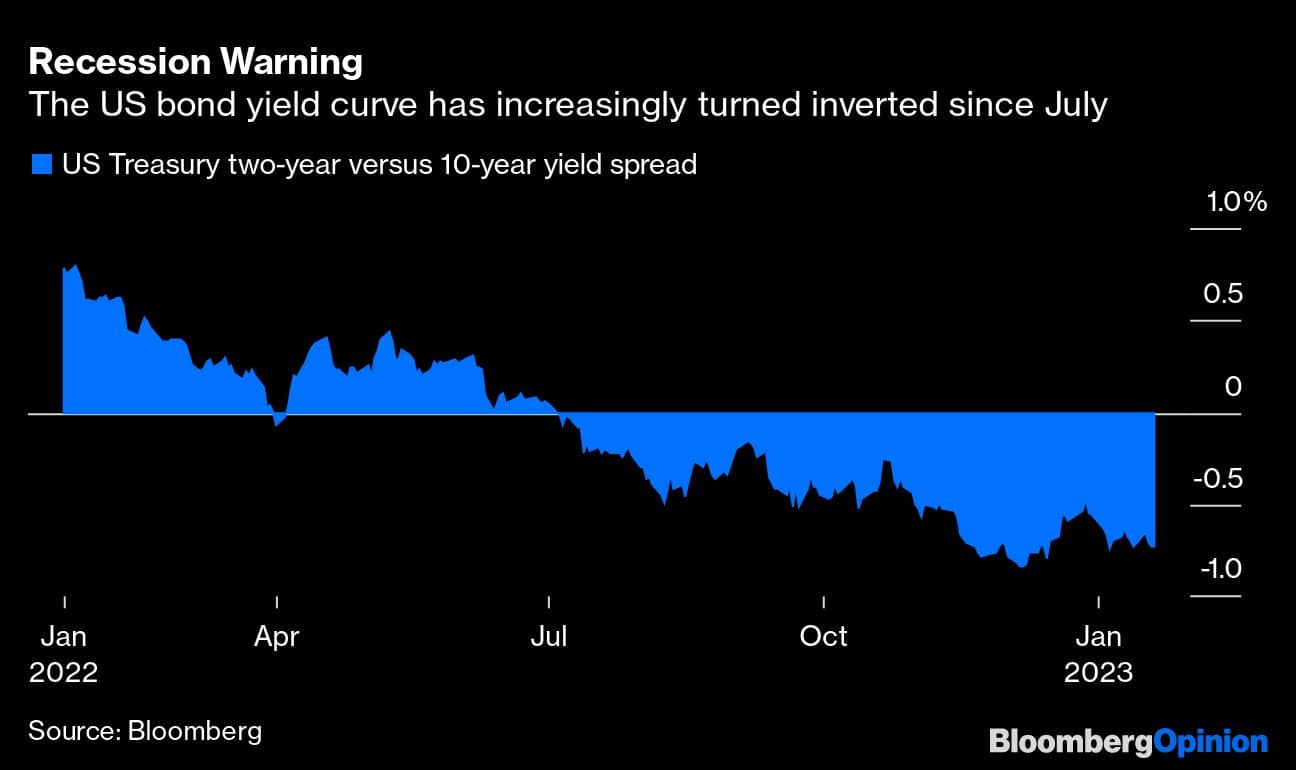 Despite increasing evidence that headline inflation is headed down fast, the central bank debate has seamlessly shifted onto the stickiness of core inflation, a large portion of which stems from housing costs. There is evident risk of a policy mistake as US economic data is worsening, playing catch-up with stagnating Europe and China. December US industrial production and retail sales (with 10 out of 13 sectors falling for the second month) both declined sharply. Producer price gains are down to nearly half their peak. Might these all feed through to curb consumer price increases, enabling everyone to keep their jobs? The Fed funds rate has gone from near zero in March to 4.5 percent in short order, along with a pronounced shift to reducing the $9 trillion balance sheet. Hiking interest rates for a protracted period isn’t believable any more, unless the Fed is prepared to swap a poor reputation for controlling inflation to one of economic wreckage. But the Fed cannot hold back the tides of the cycle forever, and markets are reacting to what is patently a serious downturn in economic activity. Expectations in the futures market firmly center on just a 25 basis-point hike on Feb. 1, with a final quarter-point move to 5 percent on March 22. The really irritating bit for the Fed is that rate cuts are now priced in by the end of the year.
The European Central Bank is in the throes of its own Canute-like experience. It is surely no coincidence that recent verbal interventions from Knot and ECB President Christine Lagarde come as German 10-year yields have fallen steadily since the start of the year to around 2.2 percent from above 2.5 percent. Similarly, the premium of Italian yields over Germany, the bellwether for European stability, has contracted to 180 basis points from more than 250 basis points in October.

Something doesn't quite connect here, as euro bond markets are simply not believing what they are being told by policy makers. Another 50 basis-point increase in the ECB's deposit rate to 2.5 percent on Feb. 2 is widely expected, but further hikes of that magnitude are not priced in. Headline EU inflation has not turned down as much as in the US, but it surely will, as bond traders can see the forward price of natural gas dropping which will relieve pressure on energy prices.

From being in the forefront of raising rates and quantitative tightening, the Bank of England has become more nuanced in its recent approach, as the UK economy has been flatlining for most of the past year. Chief Economist Huw Pill has been wobbling somewhat over his inflation expectations. At a speech to New York University last week he emphasized that his measures of inflation persistence were flashing red. Yet Governor Andrew Bailey said on Thursday a corner has been turned on inflation. The cost-of-living crisis is biting the UK economy hard, though, as fourth-quarter retail sales volumes fell 5.4 percent compared with a year earlier.

Another 50 basis-point hike taking the BOE rate to 4 percent on Feb. 2 looks more likely than not. December UK consumer price inflation dipped to 10.5 percent from 10.7 percent, but the core rate stuck at 6.3 percent. The bigger question is whether the Monetary Policy Committee will keep the inflation-fighting flame alive, despite the economy teetering on recession. Bailey dropped a loud hint that 4.5 percent is the preferred ceiling, but rate-setters voted for no change at the last meeting from 3.5 percent. It’s complicated, and only getting more so with a divided MPC.

The reason why central bank inflation mandates specify a 2 percent target over a period of two to three years is so that shorter-term fluctuations can be looked through. Falling headline inflation, and of course higher interest rates, will eventually feed through to stickier lagging elements such as housing costs, though maybe not as quickly as central bankers might desire.

If the hiking continues at the previous frenetic pace, developed world economies will slump, with growth choked by overly rapid monetary withdrawal. The International Monetary Fund reckons around a third of the world will fall into recession this year. If the US economy does turn down significantly, it will certainly drag others with it, particularly the poorest developing economies.

Lasering in on core inflation — code for allowing unemployment to rise substantially — risks leaving central banks faced with the same lack-of-growth dilemma they have been fighting for the past 15 years. The shock to the monetary system of runaway inflation from the overreaction to the pandemic is playing out. Consumer spending, which accounts for two-thirds of the US and UK economies, is slowing rapidly. Caution, not zeal, is the order of the day for the guardians of monetary stability.