It is not certain how many countries would be willing to support Afghanistan’s development under the current Taliban 2.0 regime that would not hesitate to unleash terrorism across its borders, and torture within the country

The dust has settled on the surprisingly quick and easy take-over of Afghanistan by Taliban 2.0, and the announcement of a 33-member all-male largely-Pashtun interim government on September 7, with Mullah Mohammad Hasan Akhund as Acting Prime Minister. Assuming that the international forces will refrain from military re-engagement, and the Northern Resistance Force (NRF) and other opposition groups are unable to overthrow the current Taliban 2.0 government, the world is wondering what would be the configuration of a more permanent government in Kabul, and what would be their development agenda for ‘rebuilding of the war-torn country’? Taliban 2.0 have stated that ‘they were committed to all international laws, treaties and commitments not in conflict with Islamic law.’

UN Secretary General António Guterres has called on all member states to offer generous emergency relief to Afghanistan. Even prior to this call, China was the first to come forward with $31 million worth of aid in essential supplies to Afghanistan. At the high-level ministers’ meeting held at Geneva on September 13, donors pledged another $1.1 billion humanitarian assistance. Speaking at the meeting, External Affairs Minister S Jaishankar stated that India would support the people of Afghanistan, but did not assure any financial aid.

Many countries are unlikely to recognise the Taliban 2.0 government while others have yet to decide whether they would offer humanitarian and development assistance to match the required amount. A pertinent question is: Can Afghanistan build on the progress made in the past two decades of post-conflict reconstruction and development without international co-operation?

Based on the Organization for Economic Co-operation and Development (OECD) data compiled by the World Bank, the net official development assistance (concessional loans) and official aid (grants) received by Afghanistan between 2002 and 2019 amounted to a whopping $76.623 billion. International aid decreased from around 100 percent of GDP in 2009 to 42.9 percent of GDP in 2020 largely due to the declining presence of the international troops since 2011. 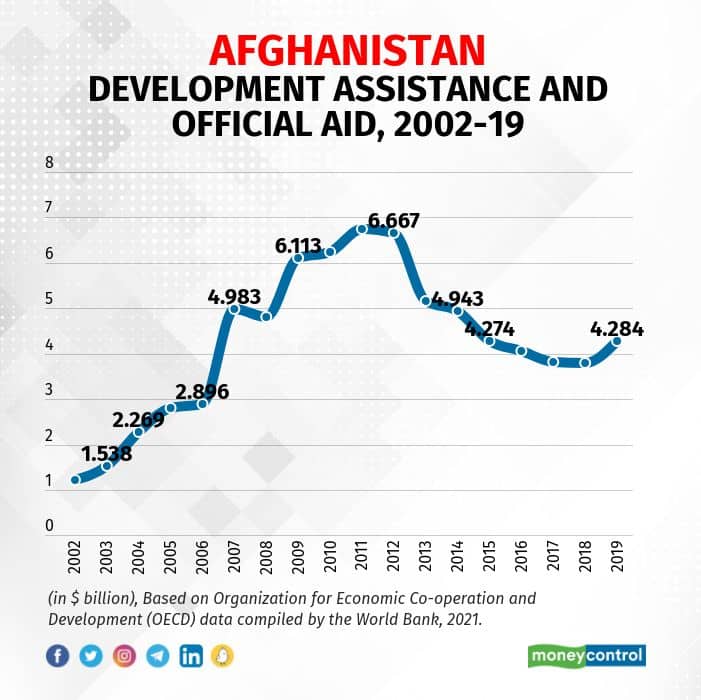 Source: Based on OECD data compiled by the World Bank, 2021).

The donor conference for Afghanistan organised virtually from Geneva in November, saw a pledge of $13 billion for 2021-24, which was 13 percent less than the $15 billion committed for 2016-2020. Some countries also agreed to make only annual commitments. The apparent donor wariness was a result of the worsening security situation, increased internal conflicts, and unpredictability of the Doha peace process result.

There is much scepticism on how much of the international aid really left the donor countries, how much was ploughed back home through contracts given to their own country’s companies and consultants, how much was pilfered within Afghanistan, and how much was really invested in the intended humanitarian and development projects. Hence, it would be better to assess the actual development outcomes of aid for about 39 million people of Afghanistan.

Based on visual observations, there was a phenomenal change in the range and quality of products available in Kabul markets even in the first decade of post-conflict development (2002-2011). In 2002, most of the fresh fruits and vegetables were imported, especially for the burgeoning international development community. By 2011, Kabul shops were stacked up with local fresh produce, as well as imported consumer goods.

The second-most noticeable change was upgrading of houses, not just reconstruction of low-income dwellings with aid money, but also higher income people investing in rebuilding with the expectation of lasting peace and stability.

Both these trends illustrate that international aid had a multiplier effect on the local economy: be it through higher salaries paid to the national staff; astronomical rents charged for offices, houses and guest houses; or better-quality goods and services demanded by the large presence of the expats. It also means that the purchasing power of most Afghan families had perked up, even at the lowest income levels from the rural farmers supplying agricultural products to the city markets, to urban informal sector workers carting it to the shops.

Such observations are further corroborated by empirical evidence. A few comparable indicators in the National Risk and Vulnerability Assessment 2005 and Afghanistan Living Condition Survey 2016-17 conducted by the Central Statistics Organization using a fairly large representative sample of rural, urban and Kuchis (Nomadic) population confirm improvements in the quality of life of Afghan people:

These facts indicate that considerable progress has been made in achieving various development goals in the past two decades. But a lot more needs to be done to provide even basic services to all and to prevent more people from falling into the extreme poverty trap in Afghanistan, which would not be possible without international assistance for another decade or two.

However, it is not certain how many countries would be willing to support Afghanistan’s development under the current Taliban 2.0 regime that would not hesitate to unleash terrorism across its borders, and torture within the country. There is no assurance of safeguarding the infrastructure and national assets built with an unstinting gift from the millions of tax-payers of the donor countries to the people of Afghanistan.

Also, going back on their initial assurances of being more moderate and inclusive regarding girls and women as well as the ethnic groups including Tajiks, Uzbeks, Hazaras and Kuchis, does not augur well.

Pushpa Pathak is Senior Visiting Fellow, Centre for Policy Research, New Delhi. She has worked as Senior Urban Development Advisor in Afghanistan (2004-2011), supported by the UN-HABITAT, the World Bank, the USAID-Office of Foreign Disaster Assistance, and the Japan International Cooperation Agency.