WhatsApp was most commonly used medium by schools to send learning materials during lockdown, shows survey

WhatsApp was by far the most common medium used for sharing learning materials and activities, followed by phone calls and visits, says the ASER 2020 report

The Annual Status of Education Report (ASER) 2020 Rural, facilitated by education-focussed non-governmental organisation Pratham, showed that this was true for both government schools and private schools.

The ASER 2020 report said WhatsApp was by far the most common medium used for sharing learning materials and activities, followed by phone calls and visits. 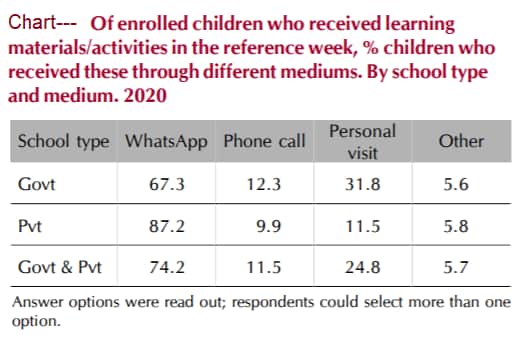 The survey was conducted over phone in September 2020 across 584 districts across 30 states and Union territories. It reached a total of 52,227 households and 59,251 children in the age group of 5-16 years, as well as teachers or head teachers from 8,963 government schools offering primary grades.

Enrollments see a dip in some age categories

The report said among boys in the 6-10 age group, there has been a sharp increase in the proportion of children not currently enrolled, from 1.8 percent in 2018 to 5.3 percent in 2020. There is a similar increase among girls in this age group.

However, this proportion has increased much less among children in the 11-14 age group, among both boys and girls. The proportion of children not currently enrolled has actually decreased over 2018 levels among the 15-16 year old age group. However, the vast majority of these children are not ‘dropouts’ in the usual sense of the term: they are awaiting admission to school. This is particularly true for children in the 6-10 age group, and explains the spike visible among the 6 year olds in particular.

The report added that because schools are closed, many young children have not yet secured admission to the first standard. The increase in not enrolled children in the 6-10 age group is therefore likely to be more a reflection of children waiting to enroll in school rather than of children who have indeed dropped out.

The report said overall~ 70 percent children did some activity when the survey was conducted. However, 30.5 percent government schools and 28.1 percent private schoolchildren did not do any activities.

Overall, compared to two years ago more number of households now have access to a smartphone. This is even as access to other goods like televisions and motorised vehicles has remained flat. If a smartphone was available in the family, it is very likely that the child’s access to available material was via WhatsApp. Interestingly, even among children whose families had no smartphones, almost a fourth (23.4 percent) were able to access WhatsApp using someone else’s smartphone.

However, in families that had no smartphones, more than half of all children availed of materials through physical visits (either going to the school or the teacher coming to the home).
Moneycontrol News
Tags: #Business #Current Affairs #education #India #lockdown #Technology #WhatsApp
first published: Oct 28, 2020 08:58 pm