Upcoming Webinar:Join the webinar on ' Unique ways of participating in agri commodity derivatives' on June 18, 5pm. Register Now!
you are here: HomeNewsIndia

Millions of people continue to take the effects of their mental health in stride. And some stories prove that one can learn to never let it define them and the life they aspire to lead.

Continuing from Part 1 of "What we don't talk about when we talk about mental health", read on to find out how Bhagya Lakshmi finally learnt to deal with her depression.

Mental health issues have a wide mandate and the taboo associated with seeking help -- self-reliance being the default option -- make the fine line between resilience and suffering blurry. It also makes the already difficult task of coping with the illness painful. In such a scenario, when would be the appropriate moment to seek professional help?

"Everyone wants to give it a try, they all won't say so," says A Geethan, psychotherapist and counsellor with close to two decades of experience. Geethan is accredited by the International Transactional Analysis Association, based in the US.

"The threshold level differs for different people. I would suggest that any person facing stress that is frequently taking up their ability to be productive, functional or contractual, for more than an hour in a day, consistently for at least seven days, should take up counselling," he said.

Geethan added that another spectrum that warrants counselling would be repeated limitation of one's self, which creates undue stress in life. "For example, I am not able to say no, or I take other people’s responsibilities, or I keep on adjusting, or I keep on withdrawing," Geethan said, pointing out that these patterns may not create immediate stress, but a larger portion of life is negatively impacted gradually.

He cites another example, "If people don't learn how to say no, they may end up taking a big responsibility in the family unwillingly, or if people are hesitant to share their pain with their loved ones, they would end up bottling themselves."

"It is these kinds of limitations and patterns that don't need to have some sort of underlying problem. But it would be helpful to take up some counselling to address these areas," he added. Although the person would be likely managing it, they need not go through the struggle and can get the help when they are healthy.

Bhagya Lakshmi did not achieve success instantly when starting therapy-- twice a week. "Therapy is horrible. It was a lot of emotions, and a lot of pain," she recounts. There were days during therapy when she would not speak a single word for 45 minutes, and on other days, she not stop talking. Some days, "I would be so broken, that I could not get myself out of bed for the sessions."

But during those gruelling sessions she realised how certain life events traumatised her, which reflected on her personal relationships and her quality of life.

Bhagya Lakshmi learned for example, the root cause for her difficulties with physical intimacy. She would comfortably give a high five to her friends, but until the age of 25, she would not even let her own mother hug her.

It was during therapy she unlocked a repressed memory of being molested while in second grade at a public park. "I remember kicking him on his chest and running back home, and not telling anybody, because my dad would have not sent us again to that public park. He always thought it was not safe for us. If at all I had narrated the incident to him, he would never send me anywhere, not even to school. For 18 to 20 years, I had to carry that with me. Not telling my sister, my friends, nobody."

The trauma from that incident seeped into her day-to-day life. Bhagya Lakshmi could not sleep properly, and would always cover herself from head to toe. She refused to sleep in any place that she was not completely familiar with, especially in public transport. She attributed this to a hyper-vigilance surrounding all the times.

"I also met some real as*****e in my life. There was this person, who was one of the sons of a reputed architect. They were organising a workshop in IIT, and he was trying to feel me up, in the name of trying to use my laptop," she said.

"All these things together messed up my life a lot. People say that one lets these things happen to one's self, I say that is just bull ***t. It just...happens, and sometimes you can't let it go."

For Snehalata Dubey*, who has been coping with severe anxiety and mild depression, a mental health condition works like a yo-yo. "You may work on it but there's no guarantee that you'll never experience it ever again in your life." 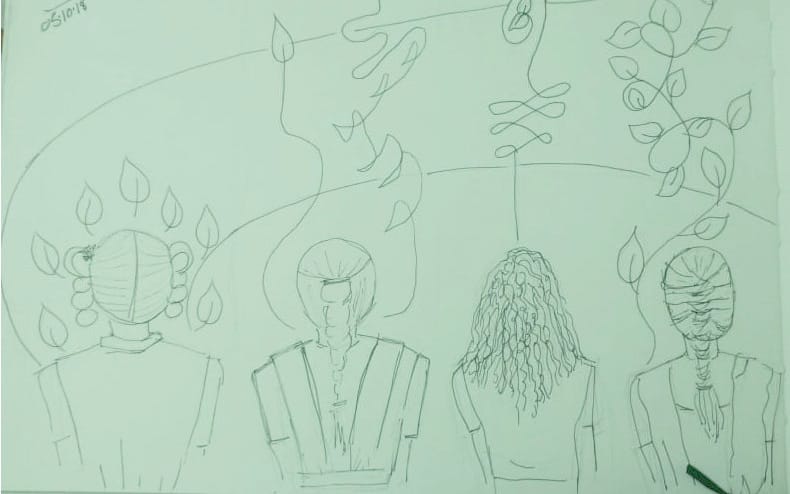 In her words, Bhagya Lakshmi continued to be that "fair curly-haired girl of the campus". She would be cheerful and chatty, talking about food, work and everything else in between within all her circles. For a whole semester, with the help of her two college friends, she secretly carried out her bi-weekly trips to the psychotherapist and took her medication, until she decided to stop.

For one thing, therapy does not come cheap. Bhagya Lakshmi said that she was being charged Rs 2,500 for a single session and counting the medication was expensive. "Although my father was supportive, I felt I should carry on on my own," she said.

That did not mean she was completely rid of her condition. The inner turmoil from her condition meant she would continue to snap at people, even getting into heated arguments over frivolous matters. "In that process, I have lost a lot of friends. They would never understand why I would break out, or even sit me down, and ask me whether I was having any issues."

Nonetheless, millions of people continue to take the effects of their mental health in stride. And some stories prove that one can learn to never let it define them and the life they aspire to lead.

Snehalata Dubey reiterated that although she has not stopped feeling acute stress, or has stopped experiencing anxiety, her way of dealing with the condition has changed. "I'm more aware of my own state of mind and hence can choose to take care of myself when I feel overwhelmed," she said.

"In fact, my own growth through therapy was so significant that I chose to study psychology again and I'm a counsellor now," she added.

For Bhagya Lakshmi, it is two years now that she has moved on from therapy. After completing her Masters, she took up a position as a lecturer and has been teaching undergraduate students for close to a year.

On introspection, Bhagya Lakshmi believed that she always saw herself at the centre of the universe and blamed the world and certain people for all her problems.

Later, Bhagya Lakshmi decided to focus her energies on a goal that was larger than herself, which allowed no scope to make her the centre of the universe. She took charge of her life, honed in on what gave her peace, and worked towards achieving it.

"At some point, I have a goal of cooking for 10 people on the street every month. That was the only goal that pulled me through all this process," she said and joked that she is yet to improve her cooking skills, and work on her trepidation of inviting strangers over.

Now, Bhagya Lakshmi looks to carve out time for her research work, and volunteers with the National Service Scheme (NSS) as a program officer. She raises awareness on menstrual hygiene and good practices among school girls in villages adopted by her team.

She lives for the moment when 25 uniformed girls sporting ponytails greet her with the affectionate "Didi" and say goodbye with a hug, in gratitude for having cleared their doubts.

"When can I become like you?" they ask with a heartfelt sincerity that only children can own.

While Bhagya Lakhsmi still regularly faces depressive bouts, her struggle with insomnia, which she had to deal with from childhood have stopped. She joked and stated that it has been replaced by a binge eating spree, triggered from the stress of trying to convince her parents of a boy in her life that she is serious about. She is grateful to have met such an understanding person, who shares her love for nature and indulges in her zest for food.

Despite everything, Bhagya Lakshmi continues to live life on her terms, one day at a time, and seeks to give it meaning and purpose like everyone else.

So how does one help out a friend, or a loved one who may be going through something similar?

For Bhagya Lakhsmi, kindness, understanding and the human connection, are paramount. Memories of such a connection being missing in her life are still too fresh. "I used to text people that I used to miss my family quite a lot and I am feeling so lonely, and people would not reply." She said that though it was because they might have had different opinions, people have to understand,"When somebody is texting you that they are not feeling well, the first thing you say should not be ‘You should go see a therapist if you are not feeling well, or if you are feeling depressed’ that is not the solution to everyone’s problems."

While Snehalata acknowledges that therapy helped her grow as an individual, she agreed that it was not a silver bullet that could solve all the problems. Any such expectations that one may have of completely getting past one's condition would be self-defeating.

Snehalata has a message for the family members and those close to people suffering from mental issues,"Take things as they come. Be empathetic without exhausting yourself. You don't have the solutions for someone else's problem. You can be there for someone, but at the end of the day, whether they seek therapy or not, is their decision."

In our hyper-connected world, people are going on to lead increasingly personal, busy, distracted lives while fighting their own invisible battles. It is here that hitting the brakes, showing some empathy, and lending a patient, non-judgemental ear, would make all the difference. Disclaimer: This article does not promote or recommend any particular treatment. If you have any medical condition please seek professional advice.