When such conditions are seen with a less empathetic, less nuanced understanding, cruel oversimplifications are employed.

As a child studying in the fifth grade, Bhagya Lakshmi* recounts how she announced in here classroom, with all the courage a 10-year-old could muster, that she wanted to kill herself.

She remembers the teacher asking another girl in her class whether she had a problem with this, but never asking Bhagya Lakshmi herself what seemed to be the problem.

"My younger self was acting out because no one was able to understand what I was going through. The teacher would have thought, 'But she is just a fifth-class student, why would she want to kill herself?'"

Soon, insomnia became a regular part of her life. She recalled being "very active" in her childhood, tiring herself out with constant intellectual and physical activities, but never being able to sleep at night.

Neither the teacher, nor Bhagya Lakshmi knew at the time that she was fated to be one of the millions of Indians to be suffer from a mental health condition. "It just doesn’t happen overnight that one doesn’t feel like doing anything for days, or cry for hours. Your mind and your body is actually signalling to you that something is going in the wrong direction. It is just that the people around us don't pick up on such things," she says.

According to a World Health Organisation (WHO) report in 2017, close to 56.7 million Indians silently suffer from a depressive disorder, which was 4.7 percent of the country’s population at the time. Close to 38.4 million citizens, or three percent of the population, were coping with an anxiety disorder with the number rising.

As she grew older, Bhagya Lakshmi started experiencing anxiousness and depression. She was soon saddled with the burden of panic attacks -- an affliction whose inward nature makes it difficult to capture its intensity in words. "Imagine you're watching a very funny movie. You are laughing and all of a sudden you feel suffocated, you start sweating,  as if the world is crashing on your shoulders. You just feel like letting that emotion out somehow. You don’t know how to react at that time, and you just snap at people," she recalls.

If a person is down in the dumps from a bad day, or bad week, they can trace their root cause to perhaps the pressures of the workplace, the apathy of the public, or the unavailability of a partner, or something more hard-hitting. A person dealing with a mental health condition however, doesn't need any such immediate root cause to trigger their symptoms.

"You don't need to have a reason to experience these panic attacks," says Bhagya Lakshmi. "I knew that something was wrong with me, but I was not brought up in a society we didn't even know that it existed in the first place."

When such conditions are seen with a less empathetic, less nuanced understanding, cruel oversimplifications are employed.

Someone suffering from depression, who cannot get out of bed, is seen as a lazy, weak person. They are expected to "cheer up" and "get over it". In cases where people suffer from anxiety and frequent panic attacks, they are often told not to "overreact" and "stop thinking too much".

When such statements are internalised by a person suffering from a mental health condition, many are obliged to keep things under wraps, and power through what they are undergoing.

Apart from the undue stress and hardship, those suffering from depression see no incentive in learning about what they are going through, believing it to be a personal flaw. It was only years later that Bhagya Lakhsmi got to know of the inextricable physiological and genetic roots of her condition.

"Recently, my mother was also diagnosed with the same condition, she was hospitalised for a month. The doctor told us that there is a certain line of DNA being passed in the women of our family, which releases a chemical that my brain won't allow to process thoughts properly."

For example, if Bhagya Lakhsmi had to introduce herself to a new person, her mind will not have processed her own name. Instead, it would have raced past to what she would have said mid-way through the conversation following the introduction.

"Your mind is racing 10 times faster than what it is supposed to process in the moment. It messes you up when you need to express something to somebody, you are not so clear, and you get irritated because of that, and no one pays attention, because you are in a different zone, your mind is in a different zone. It is difficult to dovetail these streams onto a single plane of reality and grasp people’s attention," she laments.

Her undergraduation days were painful, rife with bullying, "I was just a small town girl trying to make sense of the city around her. I never could understand English, let alone speak it. It took me a lot of time to adjust."

In her second year, between the stress of her new environment, lectures and exams, Bhagya Lakshmi was sent to a counsellor to deal with her new life.

"A family friend of hers (the counsellor) picked up during one of their dinner parties that Bhagya Lakshmi was a crazy person, and he began started spreading it around. He used to ask me, 'Have you gone to a mental doctor or what?' which was like an insult back then," she adds.

For a mortified Bhagya Lakshmi, the stigma meant she kept mum about her condition for the remaining three to four years of college life.

"I was too scared to tell my parents. Because I knew if I said something, they would then send me somewhere else and again the news would spread that I am a crazy person," she says.

Instead, Bhagya Lakshmi would cry and go to a beach and express herself in a journal. It was like a habit she cultivated when she first made her ominous declaration in a classroom many years ago. "I was never much of a writer or speaker," she says. As a child, she described herself as "cranky and irritated", as she tried to find the words to express herself. This was when she began to draw.

"I had a phase where I used to sketch my expressions, very dark things with charcoal and all. I would write poetry, very depressing stuff, both in Telugu and English," she recalls. Without knowing it, Bhagya Lakshmi joined the legion of people who took up art as a form of therapy. Among the most eminent practitioners was Winston Churchill, former Prime Minister of Britain. The statesman who helped win the Second World War against the fascist powers, also took to painting sceneries to keep the "black dog at bay," his nickname for severe bouts of depression he underwent through most of his adult life. 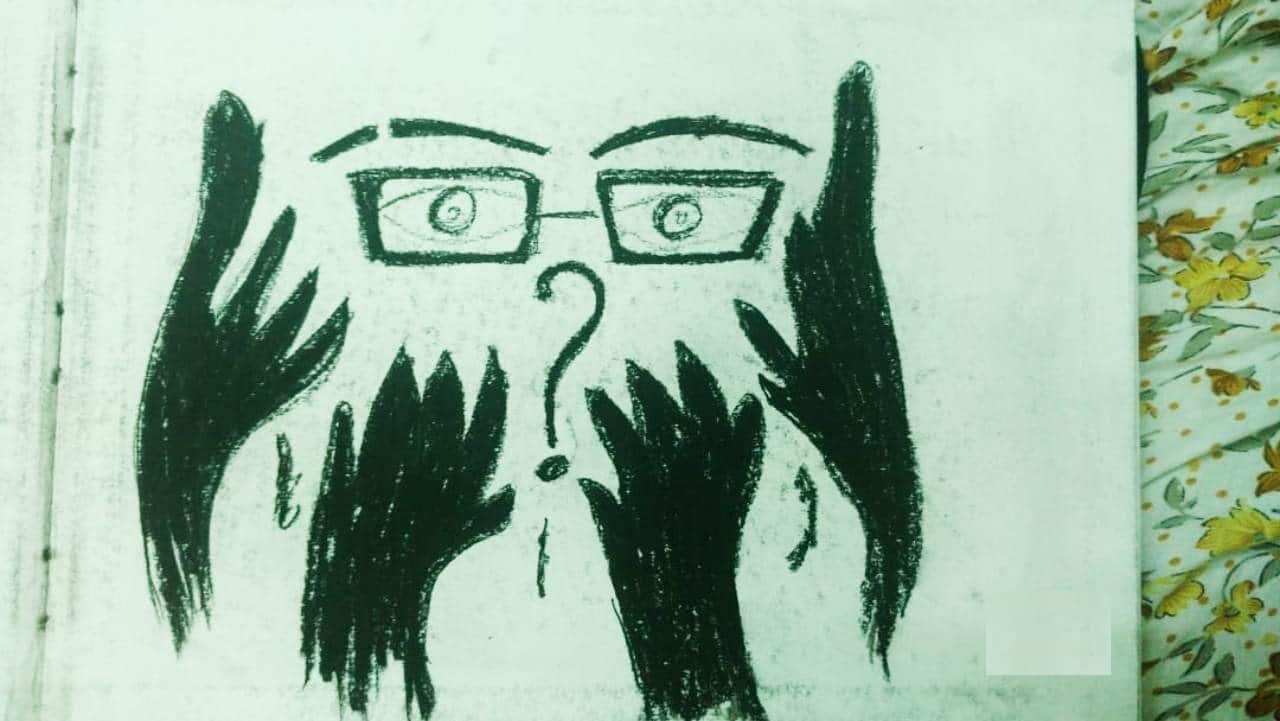 Some even took it up as their calling of life. Vincent Van Gough, a relatively unknown painter in his time, who was once shunned by society for his eccentric behaviour, is now arguably celebrated as one of the greatest artists to have ever lived. Experts attribute his unique vision to an undiagnosed, untreated mental health condition.

Some found art so life-affirming, that they decided to share it with the world. In 2014, Jovanny Varela-Ferreyra began The Artidote page on Facebook as a curation of artwork from netizens across the world. His posts are juxtaposed with a meaningful quote or aphorism that seeks to empower people to lead happy and fulfilling lives, despite their mental health condition. The page has close to 2.5 million followers, with Varela-Ferreyra now giving talks across the world to raise mental health awareness.

Addressing the elephant in the room

Bhagya Lakshmi plodded through year after year, completing her graduation, and decided to pursue her further studies. She recalls how after giving examinations, she was hounded by a friend and academic rival sixteen times to see whether she had made the cut. 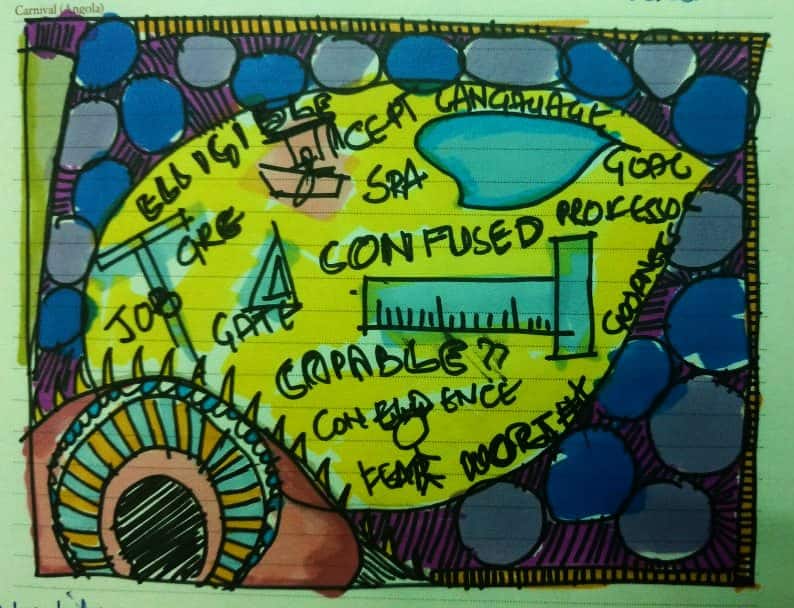 "That was when I cried for more than four hours during the night, as if it was the end of the world. Then my parents realised that something was wrong with this girl. They didn’t know that it was something so serious to be bothered about," she narrates.

Bhagya Lakshmi decided that her life must go on, and she was in college yet again, this time for her masters. She juggled the fast-paced nature of the lectures, the relentless deadlines and the presentations. She also threw herself into the active campus life and made friends in its cosmopolitan milieu.

What no one knew was that her episodes of depression and the frequency of her panic attacks were increasing. After trying to engage herself in various hobbies, and reading up on ways to cope, she decided to face the elephant in the room, and take her sister's advice to take up therapy.

Editor's note: Until now, Bhagya Lakshmi has only suppressed her feelings and dealt with all the pain herself. In the second part, read on to know how she managed to overcome her struggles.
Siddhesh Raut
TAGS: #anxiety #Current Affairs #depression #India #mental health
first published: Nov 13, 2018 07:31 am