India, the second most-populous country in the world, this month recorded its highest COVID-19 death toll since the pandemic began last year, accounting for just over a third of the overall total.

Coronavirus infections in the South Asia region surpassed 30 million on Friday, according to a Reuters tally of official data, led by India which is struggling with a second COVID-19 wave and a vaccine shortage across the region.

India, the second most-populous country in the world, this month recorded its highest COVID-19 death toll since the pandemic began last year, accounting for just over a third of the overall total.

The South Asia region - India, Bangladesh, Pakistan, Bhutan, Nepal, Maldives and Sri Lanka - accounts for 18% of global cases and almost 10% of deaths. But there is growing suspicion that official tallies of infections and deaths are not reflecting the true extent of the problem.

Regions with the most COVID-19 cases: 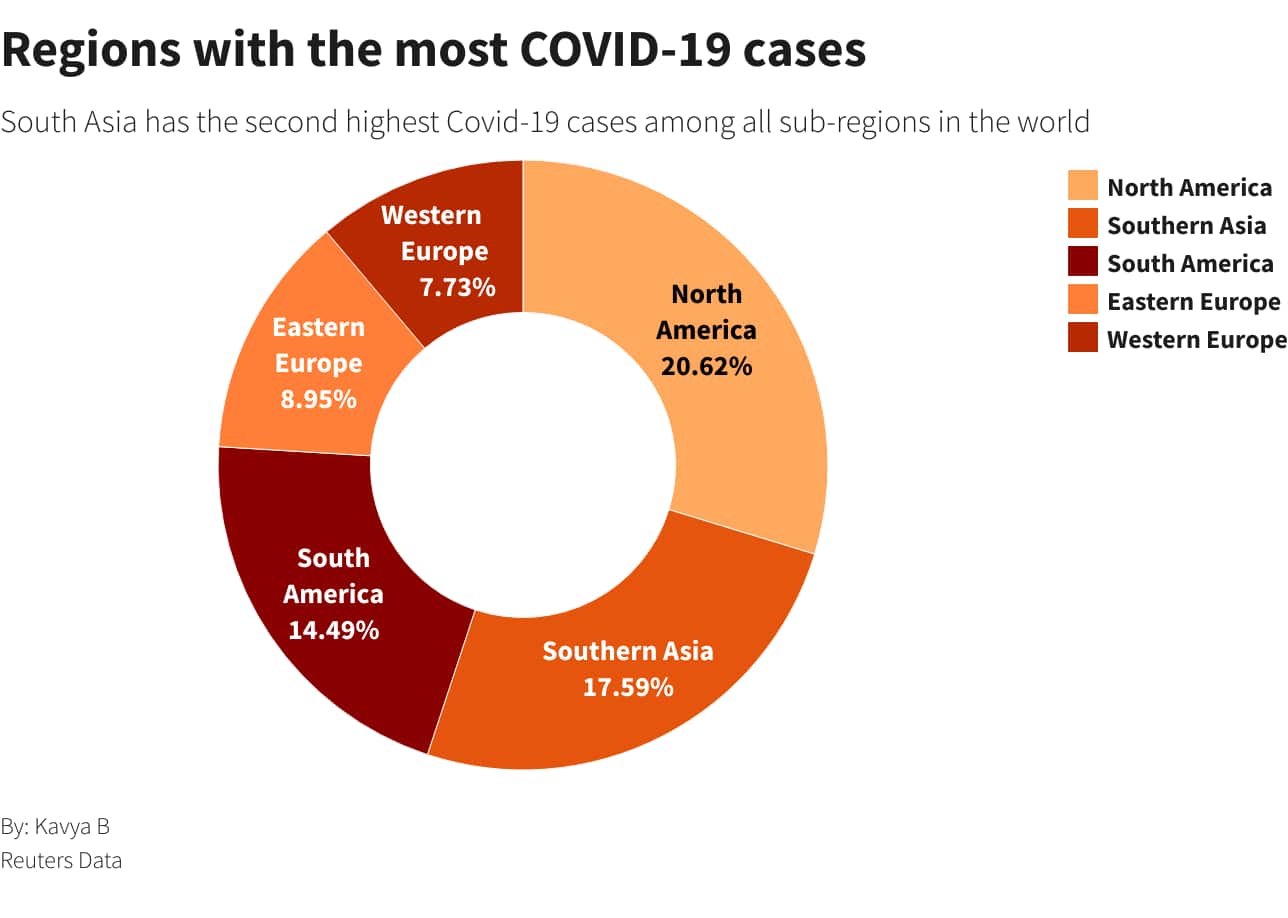 This month, India opened its coronavirus vaccination campaign to everyone aged 18 or older. However, it has not been able to meet vaccine demand despite being one of the biggest vaccine producers in the world.

India has been inoculating its people with the AstraZeneca vaccine produced locally at the Serum Institute of India (SII), Covaxin made by local firm Bharat Biotech and has begun rolling out Russia's Sputnik V.

Prime Minister Narendra Modi has faced mounting criticism for the failure to secure vaccines as only about 3% of India's 1.3 billion population has been fully vaccinated, the lowest rate among the 10 countries with the most cases.

Vaccinations in the 10 nations with the most reported COVID-19 cases: 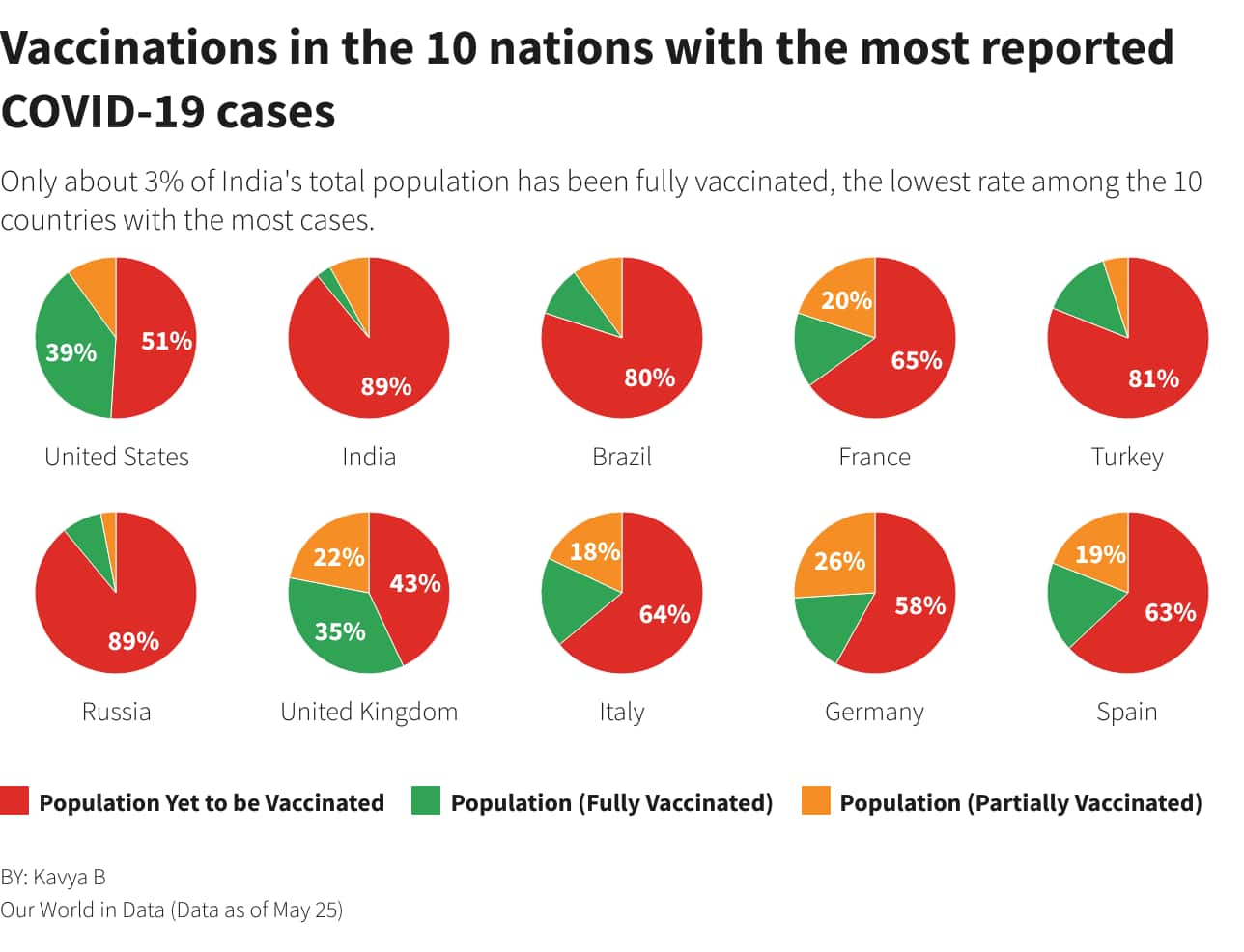 To meet domestic demand, India temporarily halted vaccine exports in March after donating or selling more than 66 million doses. The halt has left countries including Bangladesh, Nepal, Sri Lanka, and many in Africa scrambling for alternate supplies.

However, India is still facing a vaccine shortage and several of its state governments, and even cities such as Mumbai, have launched global tenders or sought expressions of interest from firms such as Pfizer, Moderna and Johnson and Johnson for urgent supplies.

India's official tally of daily coronavirus infections has been falling in the past few days, offering hope that its second wave is ebbing.

But there are serious concerns that many new infections are not being reported, largely due to a dearth of testing in the countryside.

As of Friday, India has reported nearly 27.6 million cases and 318,895 deaths. (Graphic on global cases and deaths)

Since India is unlikely to resume major exports of COVID-19 vaccines until October, other South Asia countries such as Nepal and Bangladesh are making diplomatic efforts to secure COVID-19 vaccines to prop up their faltering inoculation drives as their stocks run out.

India's western neighbour Pakistan, with purchases and donations from China and allocations from the World Health Organisation and the GAVI Vaccine Alliance, has now secured more than 18 million doses. On Wednesday, Pakistan opened its vaccination campaign to everyone aged 19 or older.

At least 219.17 million vaccine doses have been administered in southern Asia by Friday, according to figures from Our World in Data. (Graphic on global vaccinations)