Selected Articles from
Financial Times on Moneycontrol Pro
Upcoming Webinar :Register now for 'ULIP as an investment during economic recovery' powered by Bajaj Allianz
you are here: HomeNewsIndia

Reams have been written about his roles in movies directed by Ray, including one of the Apu Trilogy (Apur Sansar [The World of Apu].
Shantanu Guha Ray
Nov 15, 2020 / 03:04 PM IST

Soumitra Chatterjee styled himself on the lines of British actor Ronald Colman, relying more on style, voice and thinking eyes and not much on looks.

Chatterjee acted in over 200 movies - mostly shot in black and white- and was known as the alter ego of Satyajit Ray, who featured Chatterjee in 14 of his films and made him a cult detective figure that lived for generations.

He was Ray’s favourite star.

But strangely, when Ray made Nayak which literally translates into A Star, he chose Bengal’s reigning matinee idol Uttam Kumar. Chatterjee laughed it off. He told his friends it was his quininemoment. Consumption of the crystalline tonic extracted from Cinchona bark to counter malaria is always a bitter experience.

Chatterjee survived without Bollywood and never rolled in cash. Doctors treating him suspected the ageing actor contracted Covid after he had stepped into a studio for a shoot. And then multiple complications started, leading him to a brain dead situation. Many in Kolkata had wondered why he had to work at 80 plus. But those close to him said work was his best medicine. For over three decades, he had worked non-stop in films and plays. He had his graceful agility and easygoing charm, and also a bit of irreverent attitude, he was almost like a Jean Paul Belmondo in Kolkata. He shifted roles like changing shirts.

Reams have been written about his roles in movies directed by Ray, including one of the Apu Trilogy (Apur Sansar [The World of Apu]. Those movies, and the ones like Charulata, had Ray’s signature all over, stretching from great acting to miraculous clarity. The Guardian newspaper even called Charulata, based on Tagore’s Nastaneer or The Broken Nest, a vitamin boost for the mind and heart, Chatterjee excelling in the movie as a would-be writer.

But there were other movies where Chatterjee displayed commanding screen presence. In the 1969 movie Teen Bhubaner Parey (Across the three worlds) Chatterjee - who was into a near impossible love affair - practised the twist dance on his rooftop for almost a month before dancing it with co-actors in the streets to celebrate a soccer victory. And then, in the same movie, he turned to the proverbial Bengali romantic singing with actress Tanuja on a bridge connecting the Dakshineswar temple to Belur, home to the monks of the Ramakrishna order. In the 1973 romantic comedy, Basanta Bilap (name of a working ladies hostel), Chatterjee excelled as an uncompromising lover with a very unconventional look and comic timing.

During a shoot in Kolkata he once told me that he loved family values, reminding me of the Maria Puzo dialogue from the 1972 Bollywood crime drama Godfather: “A man who doesn’t spend time with his family can never be a real man.” In one movie he was shooting in Kolkata, Chatterjee asked Ray to make changes in one of the scenes to display movement of hands on the dining table. “The family that eats together, often stays together,” Chatterjee toldme on the sets of Shakha Proshaka (Branches of the tree).

Unlike Uttam Kumar, he did not mind mixing with his unit staff. I remember one incident when a female physician found Chatterjee chatting with his camera unit - some of them boisterous men - in a first class railway compartment. When the physician walked up to his coupe to ask him to lower the noise, he was surprised to see Chatterjee among the camera crew. Aren’t you a star, she asked Chatterjee. A human first, Chatterjee replied instantly. His sexy, wounded stare impressed the woman, she loved Chatterjee’s bad boy company and sat down for almost an hour to listen to some intense conversations on films.

Interestingly, the camera crew was a part of a unit of Satyajit Ray, which was on his way to Rajasthan to shoot Sonar Kella (The Golden Fortress) that got Chatterjee the tag of Feluda, Bengal’s thinking detective. The character he played created an entire myth around Chatterjee, making him a cult figure among Bengalis. Thanks to the Feluda character and his hardened exterior, Chatterjee became the embodiment of cool for many generations to come in Bengal.

He had his calls from Bollywood, veteran actor turned producer Shashi Kapur was impressed seeing him dressed in a white coat during a film festival abroad, walking like James Dean. He thought Chatterjee could be Bollywood’s Al Pacino. Kapur asked Chatterjee several times to shift to Mumbai. Chatterjee refused, Calcutta, not Kolkata, was his home and the world, it was his El Dorado, the fabled city of the riches. Critics said Chatterjee’s Hindi was not up to the mark but such criticisms did not bother Chatterjee, he had enough entertaining films on hand and was happy to discount Bollywood and its stunt films. Actually, he was immersed in Calcutta (now Kolkata). It was not Ray all the way with Chatterjee, he worked with a wide range of directors like Mrinal Sen, Ajay Kar and Tarun Mazumdar, all part of the trailblazer Bengali cinema. Chatterjee brought out the smoldering inner fire he controlled so well as an actor, remaining calm and cool on the exterior but with a deep intensity right under his skin. Thanks to his passion and dedication to these roles, Chatterjee outpaced, outsmarted the rest in Bengal.

In a scene from Apur Sansar (The world of Apu), Chatterjee, distraught after his wife Aparna’s untimely death due to a premature delivery, ran aimlessly through a forest in distant MadhyaPradesh.

And when confronted by his brother in law as to why he was not taking care of his son, Kajol, Chatterjee - commanding all the attention of the audiences in the cinema hall - said exasperatedly: “I just cannot forget that Kajol’s existence is the cause of of Aparna’sdeath”. That was a signature Ray scene. The seasoned director often told his friends that Chatterjee routinely surpassed himself before the camera and handled his dialogues brilliantly.

In the 1972 movie, Notun Diner Alo (Light of a new day), Chatterjee essayed the role ofan affable brother of a struggling sister who ran a tea and snacks store. Once he heard elders in his family were maligning his sister days before her engagement. An enraged Soumitra jumped into the river to save his sister from committing suicide and rushed home to accost those maligning her. And then, in his baritone voice he said: “I am the judge, I am the jury, I will punish all, I do not need any support, not even from the Gods.” It was a breakout performance, aperfect role to his talent. It was everything fans wanted in a Chatterjee performance. 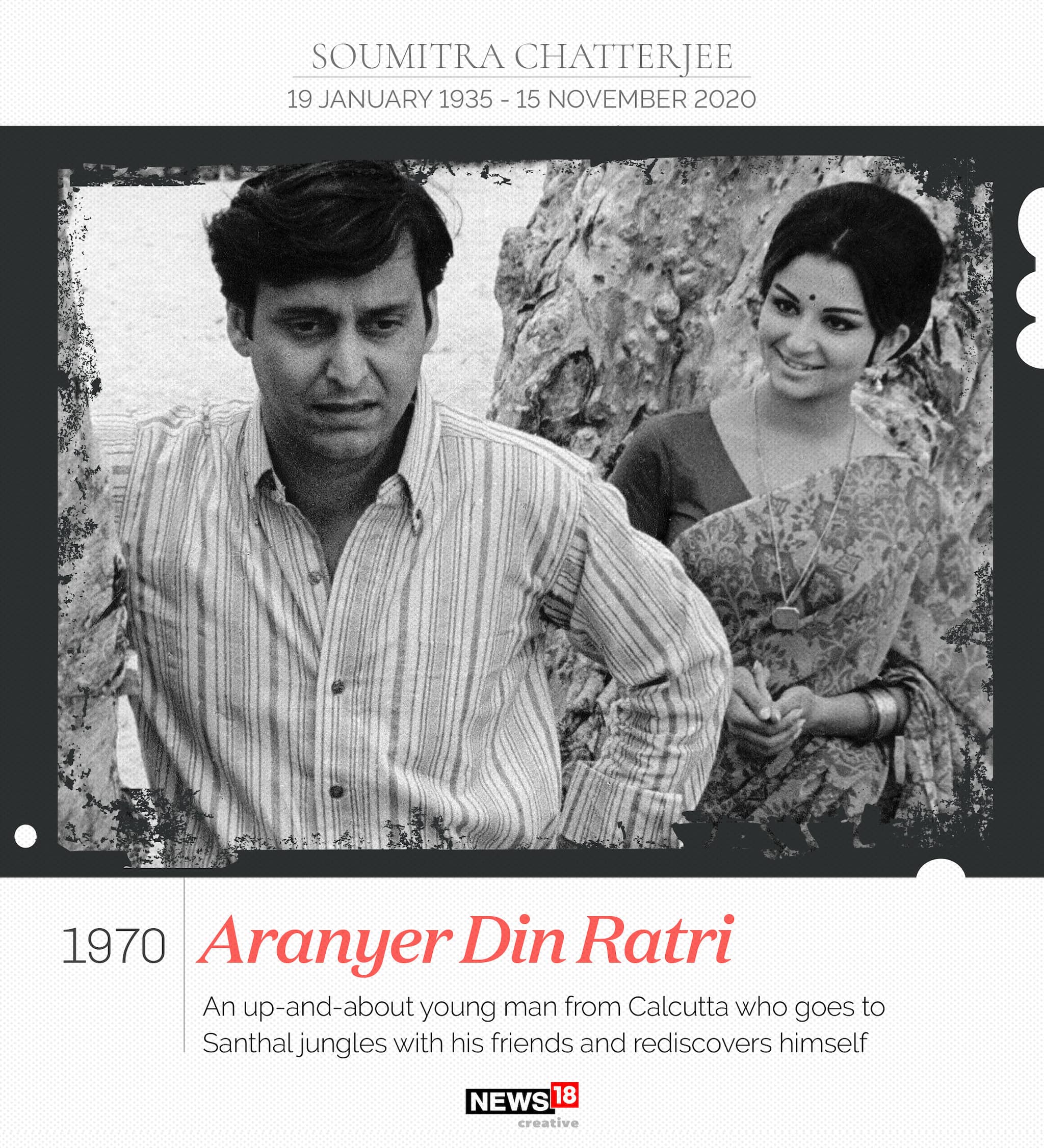 A fortnight before he was wheeled in Kolkata’s Belle Vue nursing home, an ailing, ageing Chatterjee recorded a short poem for circulation on WhatsApp groups. The opening lines were: “Death come, let’s play a game of Poker.” Admirers of Ray have a signature line for the decorated director: A Ray film is a Ray film is a Ray film. For Soumitra, one of the best leading men in Bengali cinema and a bold free thinker, his fans would probably use just one word: The Unvanquished.

D-Street Talk | Not just 2021 but these 3 themes will hog limelight in next 10 years: Trideep Bhattacharya