One in two Indians paid a bribe to govt officials in 2019, cash most popular mode: Survey

According to the study, citizens who paid a bribe last year said that it was the only way of getting work done, and getting it done quickly

One in two Indian citizens has paid a bribe in the last one year, as per the India Corruption Survey 2019. The survey pointed out that the most number of bribes were demanded during property registration, by the police, municipality and transport departments.

The survey, which sampled 1.9 lakh respondents across India, was conducted for the third year by LocalCircles in collaboration with Transparency International India.

While the 2018 survey had suggested that 56 percent Indian citizens paid a bribe directly or indirectly, this year it has reduced to 51 percent. India’s ranking in the Corruption Perception Index has improved three places as compared to 2018, and now stands at 78 out of 180 countries.

However, the number of citizens who paid a bribe stood at 45 percent in 2017. The study attributed the dip in 2017 to the post-demonetisation period where people did not have cash readily available to pay bribes at least for some part of the year.

The study pointed out that cash remains the primary mode for paying bribes, followed by paying indirectly through an agent and/or gifts. Looking at the issue state-wise, Delhi, Haryana, Gujarat, West Bengal, Kerala, Goa and Odisha turned out to be the states where citizens reported low instances of corruption, while Rajasthan, Bihar, Uttar Pradesh, Telangana, Karnataka, Tamil Nadu, Jharkhand and Punjab were the states where citizens reported higher instances of corruption. 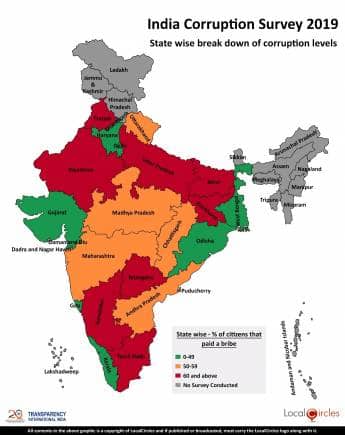 The findings of the survey also show that despite government offices increasingly getting computerised and services digitised, bribery continues to be a menace. Yet, the administration has not been able to take concrete and effective steps to curb corruption. About 61 percent of citizens who were surveyed, said that there is no functioning hotline in their state to easily report bribery and corruption.