Upcoming Webinar:'COLLECTIVE FORCE: India Inc. unites to tackle the second wave of COVID-19' on June 23, 11 am. Register Now!
you are here: HomeNewsIndia

Still holding on to your old notes? You're not alone as millions are still in possession of demonetised currency — willingly or otherwise.

Ankita Dey** lost her father two years ago. Before his death, he used to give her money from time to time. "After demonetisation, I didn't get that money exchanged because they were the last notes from his hands," she says.

The Reserve Bank of India (RBI) recently stated that more than 98.7 percent of the Rs 500 and Rs 1,000 notes that were unexpectedly devalued last November have returned to the system. But Dey is one of the many Indians who have held on to their demonetised notes — willingly or otherwise.

For Geetanjali Rao, this year's household cleaning ahead of Diwali proved to be dampener after she spotted some old currency notes.

“I was rearranging some old saris in my cupboard, and I noticed a few reddish bundles of notes,” says Rao, a homemaker in Dubai.

As it turned out, those reddish bundles amounted to Rs 15,000 but were rendered useless by Prime Minister Narendra Modi's decision on November 8 last year to freeze 86 percent of the currency overnight.

“I remember reading about it in the news, and how all our relatives were rushing to the banks to deposit their money. But we never found the right time to come back to India and deposit these notes. We thought we still had more time,” says Rao.

Time was not on the side of many depositors. After demonetisation was announced, a panicked public stood in serpentine queues outside banks in a bid to deposit or exchange their devalued notes. The government kept changing the timelines and the Reserve Bank of India (RBI) kept modifying its guidelines.

The public initially thought they had till the end of December to deposit their old notes, but were abruptly informed in late November that they would no longer be able to exchange notes over the counter. Deposits were still allowed, however, till December 30 and exchanging notes at RBI offices was permitted for a long period. 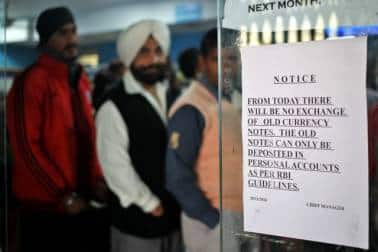 In the thick of things, money saved for a rainy day occasionally slipped people’s attention.

“I used to save a certain amount from the money I got because I was planning a trip with my girlfriend at the time," says Jaswant Rai (name changed), a journalist based in New Delhi. "Then we broke up and I moved to Chennai and I forgot about all the money.”

Rai had saved close to Rs 12,000 for the trip he never ending up taking.

“My parents shifted house around four months back and they found it at that time,” he said.

Bimala Devi, a home-maker in Bengaluru, had a similar experience. She recently discovered Rs 4,000 lying beneath a newspaper in her cupboard.

"I tried reaching RBI but came to know that it's useless now," she says.

Some people are still hopeful of a window being created for them to deposit the demonetised notes, even as petitions in this regard are being heard in the higher courts.

Snehal Wagh (name changed), a software engineer from Kolkata, says that her family keeps some money in their locker after their Diwali puja at Nagpur in keeping with tradition.

With her parents stationed in Mumbai during those two crucial months, they were unable to take out their deposits in Nagpur. The family was left with Rs 13,000 of the old currency.

“I still plan to exchange the notes, but I am unaware of the process, or even if such a process exists,” she says.

But there are some people who voluntarily kept the old notes.

George Biswas, an electrical engineer from Mumbai and a coin collector, retained the notes for sentimental value.

“I have kept two of these older notes as a part of my numismatic collection, as well as to show my kids the currency someday,” he says.

Biswas also has an eye on the future.

“A lot of people don't know this but there were 1000-rupee notes during the seventies as well which were eventually demonetised. They are extremely rare and now go in auctions from anywhere between Rs 20,000 to Rs 50,000,” he says, implying that there might be good news in the long term for those who have resigned to the fact that their old currency may be useless.

** Names have been changed in this story as holding on to demonetised notes is prohibited.

(Disclaimer: Prohibitions related to specified notes are as follows:  A person will be prohibited from holding, transferring or receiving the specified bank notes from December 31, 2016 onwards.  It exempts persons from this prohibition if: (i) a person holds up to 10 old notes (irrespective of denomination), (ii) a person holds up to 25 notes for the purposes of study, research or numismatics (collection or study of coins or notes), or (iii) a person holds notes on the direction of a court.  In addition, the RBI or any person authorised by it, are also exempted from this prohibition. Read the full provision here)
Siddhesh Raut
TAGS: #demonetisation #Economy #India
first published: Nov 8, 2017 06:10 pm