Kerala floods: Why incessant rains are not the only reason for the devastation

Incursions into catchment areas of rivers that have dried up and mountainous areas have rendered settlements in their vicinity vulnerable to vagaries of nature.

Kerala is no stranger to heavy rainfall during monsoon, but incessant rains in the past couple of weeks has caused massive flooding across the state. The deluge has claimed over 200 lives, and rendered hundreds of thousands homeless. More than 1,50,000 people are currently lodged in relief camps, while 444 villages have been declared flood-hit. The total damage to property due to the devastation caused has been pegged at Rs 8,316 crore.

Incessant rainfall over the past few days has exacerbated the situation, but doubts linger as to whether the floods this year are a natural calamity or a disaster induced by indiscriminate development. India’s western coast has received above-average rainfall on account of sustained low-pressure conditions. However, other factors such as a change in land use patterns and climate change could have contributed to the situation on the ground.

Experts believe that injudicious use of land is responsible for making some regions of the state more prone to floods and landslides. Incursions into catchment areas of rivers that have dried up and mountainous areas have rendered settlements in their vicinity vulnerable to the vagaries of nature.

Further, Kerala is yet to implement recommendations of the Gadgil Committee on conservation of Western Ghats, which was submitted in August 2011. Many political parties had protested against the report on the grounds that it was excessively environment-friendly, and not in tune with ground realities.

The committee prescribed the cessation of intrusive activities in ecologically sensitive areas, a move that could affect the livelihood of many upcountry people.

The Institute of Tropical Meteorology analysed rainfall data dating back to 1900s and held global warming responsible for an increase in the intensity of rainfall during monsoon. A study undertaken by IIT Bombay found deforestation culpable for growing ferocity of each successive monsoon.

The Gadgil Committee was set up by the Centre in 2010 over concerns that human intervention was changing the face of the Western Ghats, the mountain range responsible for breaking down cloud formations and dissipating rainfall. However, another committee was constituted under the leadership of former ISRO director Krishnaswamy Kasturirangan, after all six states in the Ghat objected to the previous committee's recommendations.

The broader contours of the Western Ghats span across Kerala, Karnataka, Tamil Nadu, Maharashtra, Goa, and Gujarat. The second committee took a lenient view towards the problems of those living in the hills.

The zones considered for the study were reclassified and the land labelled as ecologically sensitive was reduced to 64 percent from 37 percent. Even then, state governments protested saying that those who have called the forest their home for generations would have to be evicted and resettled if the recommendations were implemented. 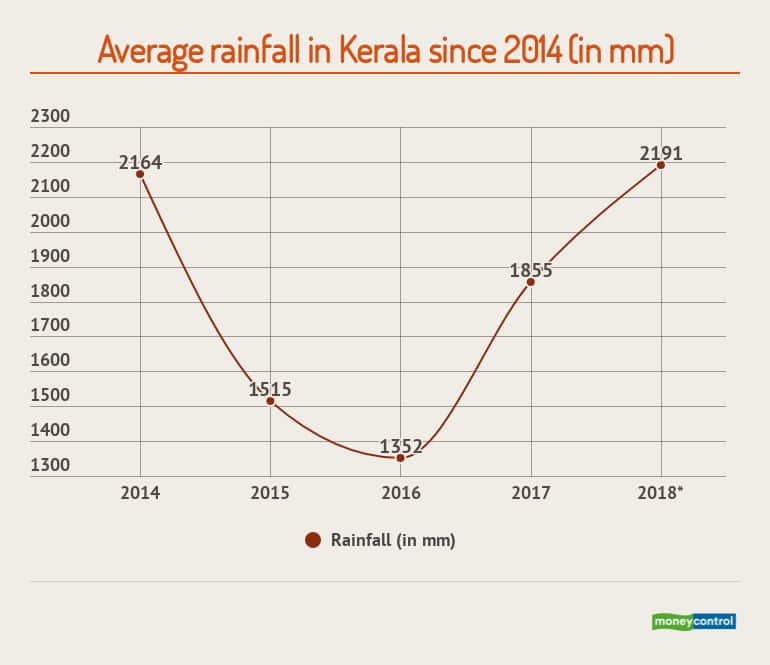 As far as conditions in the Western Ghat are considered, low pressure over the Arabian Sea draws in southwesterly winds which result in rainfall once they hit the ghats. Two such instances happened on August 7 and 14, resulting in torrential rains in Kerala and large parts of the Konkan coast. It resulted in 7,158 mm of rainfall – roughly 46 percent of the total rainfall recorded in other parts of the country since the onset of monsoons.

As of August 16, Kerala received 2,191 mm of rainfall, the highest in the last five years. Despite the closure of the monsoon season being far off, the state has already recorded 30 percent excess rainfall over the long-term average of the past 50 years. Idukki district, which is home to the Mullaperiyar and Idukki dams, received 70 percent excess rain. Low lying Ernakulam district had received 21 percent excess rain, enough to cause cancellation of flights from Kochi airport.

Kerala is the only state that has recorded excess rainfall this season. On average, the state received 37 percent excess rains. Manipur is the only other state with a below par monsoon, with a deficit of 66 percent.

The formation of a low pressure system in the Arabian Sea over Lakshadweep could move towards mainland, leading to precipitation. More rain is forecast in the coming days.