India’s COVID-19 case tally is above 3.29 crore with 45,352 new cases reported, as per the health ministry’s September 3 update. New cases down by 4 percent over the previous day; active cases rise for the third day after a drop.

As many as 366 new deaths were reported in the last 24 hours, new recoveries at 34,791 in the same period, the latest release showed. More than 67.09 crore vaccinations have been administered across India, according to the September 3 update, with 74,84,333 new vaccination doses administered on Thursday. Of the total vaccinations administered to date, 77 percent are recipients of their first dose while 23 percent have received the second dose. Among states, Uttar Pradesh administered the most (cumulative) vaccine doses at 7.58 crore, followed by Maharashtra at 6.08 crore and Gujarat at 4.78 crore. Kerala reported 188 new deaths, the most, as per the September 3 update, followed by Maharashtra (55), Karnataka (22), Tamil Nadu (20) and Uttar Pradesh (16). These five states account for 82 percent of all deaths reported in the country.

C.1.2 COVID-19 variant | A look at what we know so far about the newly discovered mutation 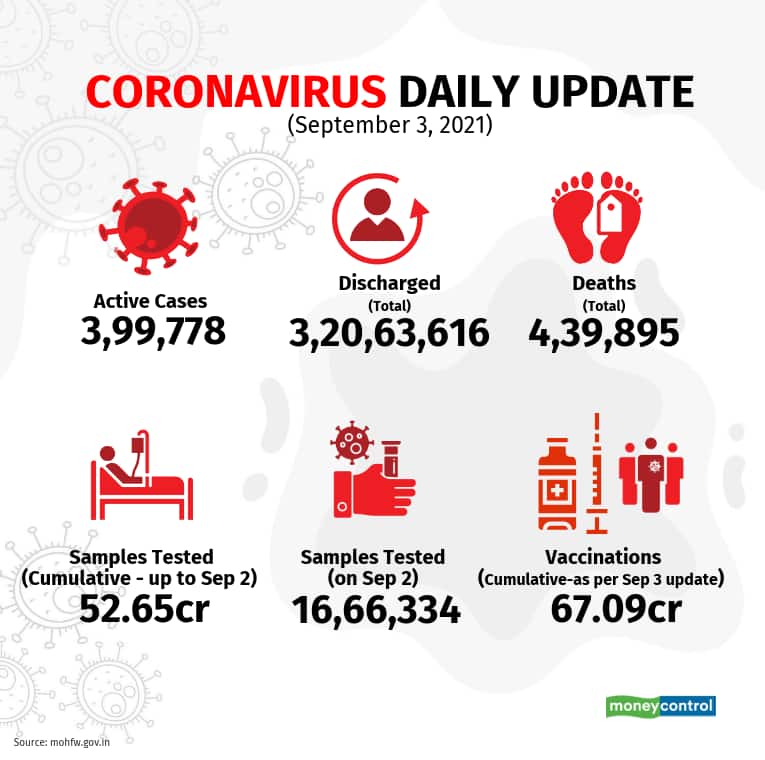 Total COVID-19 deaths in India now stand at 4,39,895 as per the September 3 update. The mortality rate is now at 1.3 percent with Punjab reporting the highest (2.7 percent). Over 16 lakh daily tests were reported on September 2 with more than 52.65 crore tests carried out to date.