Kerala reported 67 percent of new cases and accounted for 53 percent of the active cases in the country, as per the August 27 update from Ministry of Health and Family Welfare, Government of India.

COVID-19 cases have once again picked up pace in Kerala with at least 30,000 new cases reported in the last two days. Cases have breached the 30,000-mark after three months. The state currently has 181,747 active cases, about 53 percent of the national total, according to the August 27 update from the central health ministry. 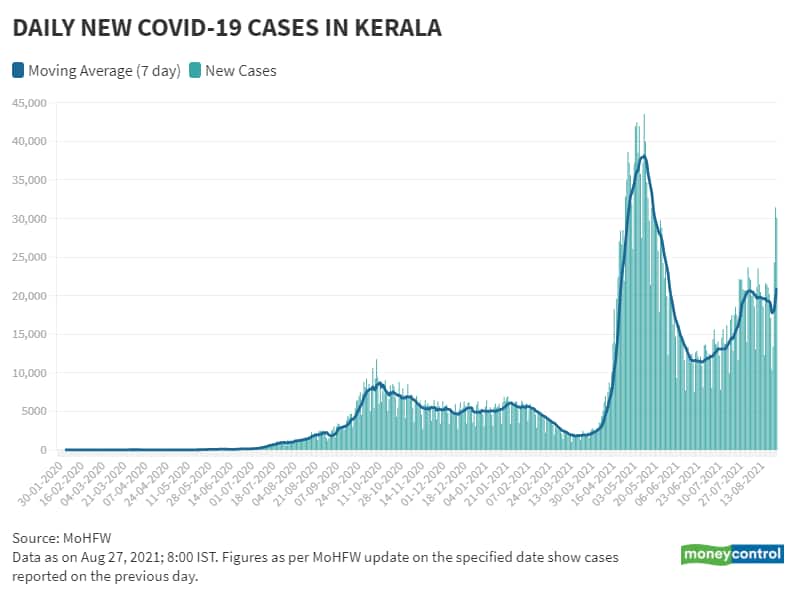 Kerala also reported 162 deaths, the most in the country, taking the total toll above 20,000. 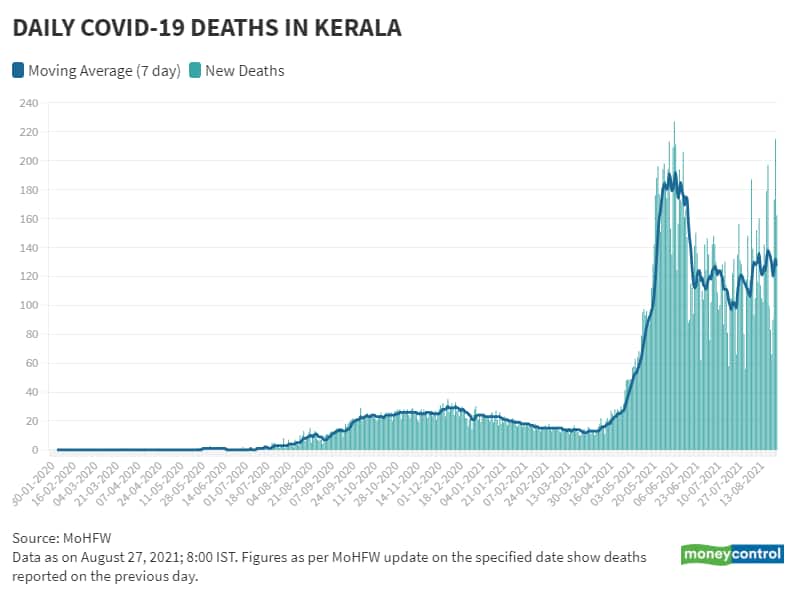 Kerala has also reported a high test positivity rate of at least 18 percent over the last three days.

“The ICMR seroprevalence survey shows that more than 50 percent of the Kerala population is still unaffected,” the state’s Health Minister Veena George said. “That means we have the highest number of susceptible people in the country. We are doing maximum tests, (our) tests per million is the highest in the country. We are also tracing, testing and reporting every case.”

Malappuram, Kozhikode and Ernakulam reported the most (about 43 percent) active cases in the state.

With cases in Kerala and Maharashtra resurfacing experts warned people against letting their guard down against COVID-19 which could invite a third wave of infections.

One of the reasons for the rise in cases in Kerala is said to be due to “irrational lockdown relaxations and increased mobility” in the state, experts suggested. Also, testing had seen a drop amid the festive period in the state, which has now picked up, reflecting higher cases.

Based on Google’s COVID-19 Community Mobility Report data, Moneycontrol looked at how Kerala’s mobility - to certain places of usual visit such as grocery/pharmacy, parks, public transport, retail/recreation places, workplaces and residence has changed over a period of time. The mobility report measures changes compared to a baseline value before the pre-COVID lockdown (January 3 – February 6 2020) period.

Mobility towards supermarkets, pharmacies and food shops and parks increased significantly in the week leading up to the festival in the state, data suggests. While outings for retail and recreation--such as restaurants, cafés, shopping centres, theme parks, museums, libraries and cinemas--are down, possibly due to restrictions in place. Likewise, the movement towards public transport and workplaces also indicate a negative trend.

The surge in cases indicates a tough battle for the state and the administration in the days ahead. Kerala was the first state in the country to register the novel coronavirus case in January 2020. Since then, it has reported a total of 3.9 million cases. To date, 3.7 million people have recovered in the state with the current recovery rate at 94.8 percent.
Moneycontrol News
Tags: #Active cases #COVID19 #India #Kerala
first published: Aug 27, 2021 03:53 pm