How this drought-prone village in Maharashtra became water-sufficient

Prosperity has come to Kadawanchi in a big way, thanks to watershed management. Its annual income has shot up from Rs 74 lakh in 2000 to a whopping Rs 72 crore in 2019!

Since the watershed work, villagers have been growing fruits and vegetables profitably. Credit: Chandrakant Kshirsagar

If it can be done in Marathwada, it can be emulated anywhere else in the country – provided there is a will. A village in a region known for its arid landscape and high incidence of farmer suicides has demonstrated how to create an oasis in a bleak topography.

The Marathwada region, which spans eight districts of Maharashtra and borders Karnataka and Telangana, has traditionally been drought-prone.

According to reports, it’s hit by a severe drought almost every two decades and suffers from dry spells in between, leading to crop losses and placing a farming community under perpetual distress.

One village in Marathwada has managed to become water-sufficient and revive its agricultural fortunes, thanks to watershed management.

Located in Jalna district, Kadawanchi is a village of dry and undulating terrain. It neither has a river nor a stream flowing through it – common to thousands of other villages in the country. Until 1995, women would walk several kilometres in the blazing sun to fetch water for daily needs while men waited for rains to grow jowar, wheat and pulses, the three main crops cultivated there.

Today, however, this village of 750-800 farmers is water-sufficient. It has more than 400 farm ponds for irrigation and ample groundwater to keep the borewells running round the year.

When 101Reporters asked the villagers how their lives had changed, they turned to numbers proudly. Before 2000, more than 300 residents of Kadawanchi would migrate to neighbouring districts to work as sugarcane labourers in the off-season. Now, over 500 migrants from all over the country come here to work in farms.

According to a survey done by a local NGO, Marathwada Sheti Sahaya Mandal, the annual village income shot up from Rs 74 lakh in 2000 to a whopping Rs 72 crore in 2019!

Kadawanchi is a shining example of how communities can fight dire circumstances if they are provided with the right knowledge and given adequate financial support.

1995-1996 was an important period in the life of this village. Residents were staring at water scarcity and negligible income from farming. It was then that an elder, Vijay Anna Borade, decided to visit the adjoining Parbhani district where villages like Jodgaon had implemented watershed measures. Other villagers joined him and saw how water management had turned around the fate of these drought-prone communities.

On their return, they met members of the Marathwada Sheti Sahaya Mandal that runs the Krishi Vigyan Kendra (KVK) in Jalna. KVKs are farm science centres that demonstrate area-specific technology modules in the field of agriculture and are funded by the Indian Council of Agricultural Research (ICAR).

Incidentally, around the same time, Jalna’s KVK got additional funding of Rs 1.15 crore under the Indo-German Watershed Development Programme [IGWDP] to carry out water conservation in 100 villages in the district, including Kadawanchi.

To get the ball rolling, 21 small, medium and big farmers of Kadawanchi, including six women, came together to form and register a watershed committee. Close to 1,500 hectares of land in Kadawanchi is under grape cultivation. Credit: Chandrakant Kshirsagar

“[Along with the villagers], we carried out watershed work at every survey and every farm. We also planted saplings on 200 acres of wasteland in the village,” says Pandit Warse, a KVK engineer.

Since Kadawanchi gets low rainfall, KVK adopted the ridge-to-valley watershed management model — this intervention aims to divert, store and use every drop of water falling on or running off a region. And so, continuous trenches were dug to slow down the water flowing downhill and facilitate its percolation. Farmers were asked to adopt drip or sprinkler irrigation to reduce the wastage of water. “The water table went up in a year,” Warse remembers.

However, the watershed work turned out to be easier said than done. Borade recalls:  “When the villagers realised that it would take up a lot of time, they dropped off in three days. They had their house and farm chores to look after as well.”

To inspire them to carry on, KVK engineers themselves got down to digging trenches and ponds. And the villagers came back as quickly as they had left.

“We contributed so much shramdaan [voluntary labour donation] that we could not use up the [IGWDP] funds fully,” says Borade. Today, with Rs 12 lakh in its bank account, Kadawanchi’s watershed committee is the richest in the state, he claims.

In the next phase, farmers were taught how to select crops that consume less water and also the importance of diversifying crop cultivation. The latter improves the fertility of the soil whereas mono-cropping strips the soil of nutrients.

As a result, they gave up the cultivation of water-intensive crops such as wheat and onion. They started growing pomegranate and vegetables instead, because these are all-season crops and require less water. Later, they moved to grape farming in a big way because it brought good returns.

Take the case of Chandrakant Kshirsagar. The ex-sarpanch (head) of Kadawanchi would earn Rs15 lakh from a grape farm cultivated on half-an-acre land, but since the watershed work, he grows grapes on 16 acres, pushing up his income to Rs 35-40 lakh per year.

Of the 1,810 hectares of farmland in Kadawanchi, 1,500 hectares are under grape cultivation — almost 93 times since 2000. The area under grapes today accounts for 46 percent of the total land in the village when it should be 26 percent, as per KVK’s recommendation.

But grapes require a lot of water. So won’t growing them on a massive scale undo the whole point of water conservation? Warse agrees that grapes are water-intensive, but they can adapt to arid conditions by developing a deep root system, he says. Food and Agricultural Organization states the same on its website.

Members of the village watershed committee, KVK and the NGO have taken note of this skewed shift. That’s why three years ago they started persuading the farmers to grow custard apples alongside grapes to keep the soil healthy.

Farmers like Bhanudas Salve have understood. “We make sure all farmers [small and big] diversify crops every year otherwise there will be no difference between us and those who cultivate only sugarcane [which is a water-guzzling crop].”

The watershed committee has also drawn up guidelines to use the water sustainably. For instance, if the region gets less than 300 mm rains in a year, the farmers should grow fewer summer crops.

The watershed initiative has benefited Kadawanchi in more ways than one. Says Kavita Golde, 40, who runs a grocery store, “Almost 70 percent of the families stay in farmlands and women of these families don’t have to go outside to fetch water now. They have water connections or borewells in their farms. However, people who stay outside the farms still face water problems during April and May, the summer months.” 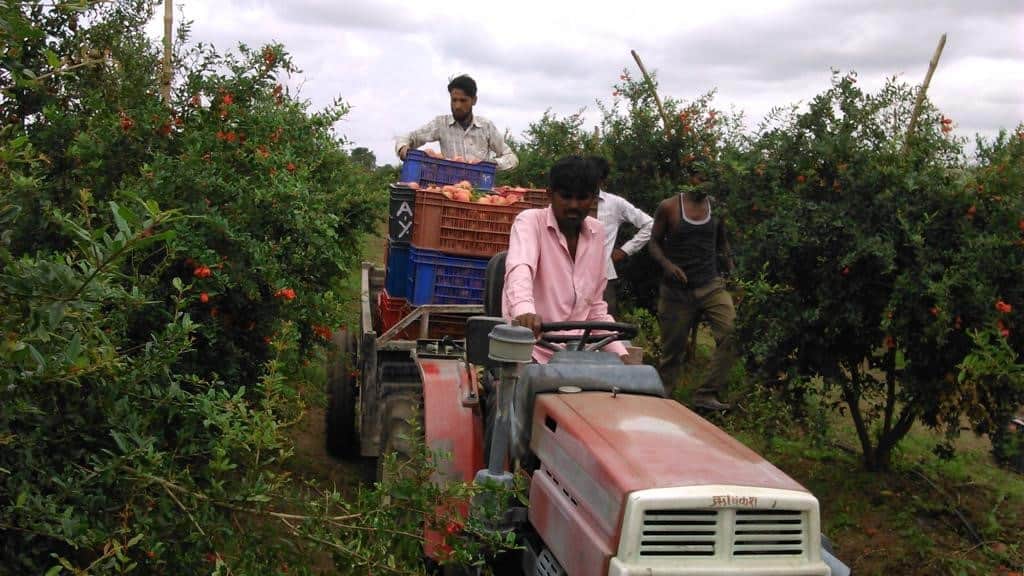 This forest has been developed on 200 acres of wasteland. Credit: Chandrakant Kshirsagar

With water came birds, animals and a forest. Kshirsagar explains: “The 200 acres of wasteland that we have done plantation on has become a dense jungle. It’s got seesham, teak, bamboo and banyan. It’s so dense that people are scared to go inside at night.”

These days, birds such as peacock, bee-eater and hornbill, and animals like monkeys have become a common sight. Leopards too have been spotted.

An increase in farming income has lifted their aspirations as well. Kshirsagar informs that “More than 45 children are now studying in various universities across the state. Many students go to Pune and Mumbai, but return to the village to do farming [because it is lucrative].” More than 200 families own a four-wheeler today, he adds, to underline the improved economic situation in the village.

Latur-based environment expert, Atu Deulgaonkar, is all praise for the village of Kadawanchi. He says, “The government failed to implement watershed management schemes [in the state] successfully. It also failed to convince the farmers to give up crops like sugarcane. This [watershed] project should be a model for all.”

That it already is. Kadawanchi’s success has inspired nearby villages like Ambedkarwadi, Shahi, and Ghetuli to take up water conservation.

A government official, who spoke on condition of anonymity, also lauded this project as “a one-of-a-kind in Kadawanchi”. It’s not a far-fetched remark considering that when Marathwada was hit by droughts in 2012 and 2016, the residents of Kadawanchi still had enough water to drink, feed their cattle and grow grapes, Kshirsagar tells us. This is a village that surely needs a showcase.

(This article is a part of 101Reporters' series on The Promise of Commons. In this series, we explore how judicious management of shared public resources can help the ecosystem as well as the communities inhabiting it.)