As the argument over the government’s decision to scrap high value currency notes is still raging, the country is all set to mark the century of the One Rupee note printed in India.

The Re 1 note has officially completed a century in its existence.

The last hundred years - the first note was introduced on November 30, 1917, with the photo of King George V – have been all but tumultuous.

Even though currency notes started being issued by the government of India in 1861, the Re 1 note was launched in 1917 because the silver used for the Re 1 coin was melted for making weapon components in World War I.

Rs 2.75 lakh is the amount that a 1985-issued Re 1 note signed by S Venkitaraman, the then governor of Reserve Bank of India, fetched in an auction on January 21, 2017, at the Classical Numismatics Gallery.

Sometimes people are willing to pay as much as Rs 15,000 for a bunch of hundred Re 1 note. But why was it discontinued so many times?

The Reserve Bank of India website says its issuance was discontinued first in 1926 on "cost-benefit considerations".

Trivia about the One rupee note 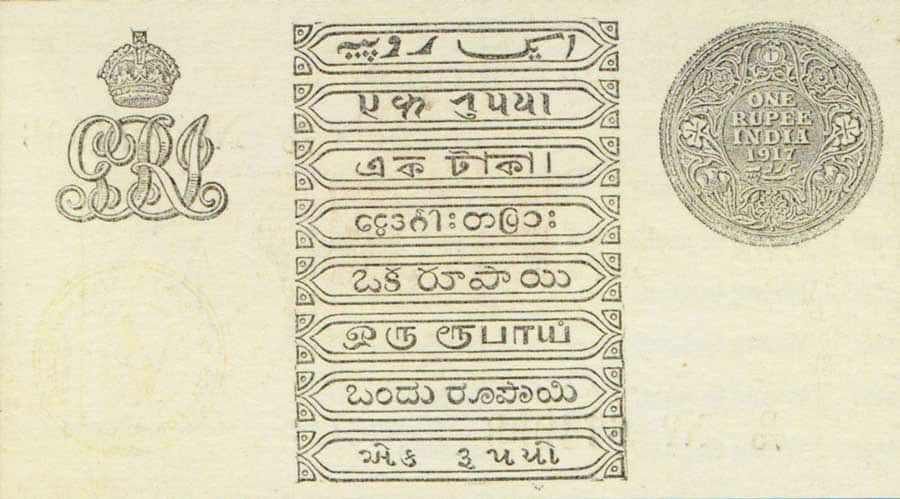 The backside of the initial rupee one note

# Since 1917 to 2017, there have been 125 different one rupee notes that have been issued for circulation with different serial numbers and signatures

# Over the past 100 years, the one rupee note has been redesigned 28 times

# The one rupee note was used as a currency in Persian and Gulf countries like Dubai, Muscat and Oman

# One rupee note is the only denomination note with the text “ Government Of India” printed on it, all other currencies have 'Bharatiya Reserve Bank' and 'Reserve Bank of India' printed on them

# It is issued by the Government of India and not the Reserve Bank, and is the only 'currency note' or an asset, and not a 'promissory note', which is a liability

As per a report in Hindustan Times, the approximate value of a Re 1 note back in 1917 was equivalent to a Re 1 silver coin.

Even as it has gone through these travails, the Re 1 note has retained many of its unique distinctions, including being called a 'coin' in legal speak.

Again, unlike other banknotes, this is not signed by the RBI governor, but by the finance secretary.

When it was introduced, the Re 1 replaced the silver coin, which was the prevalent way of storing the value of the princely Re 1.

"Prices of silver surged during the World War I, so they first printed the note with a photo of the prevalent silver coin on it. Since then, every Re 1 note has a picture of the one rupee coin of that year," Girish Veera, a veteran collector from Dadar, central Mumbai, told PTI.

According to Veera, the Re 1 note has been discontinued twice and underwent design overhauls at least thrice, excluding the modifications, but it remains one of the most sought-after pieces for every collector.

Not surprisingly, so many changes have raised investor interest in the note and some rare notes have fetched tens of thousands in the collectors' market.

The centenary is expected to be a huge draw at the National Philatelic Exhibition starting in the megapolis on 30th November, and Mintageworld, an online museum for stamps, coins and currency notes, is commemorating the occasion by gifting a memento to each visitor.

Veera pitched for the continuance of the little note, saying "when a bigger denomination note says 'I promise to pay the bearer Rs 500 or Rs 2,000', what is the most basic thing there, a single rupee! I think every wise government should continue with the note."