Government rectifies 'no country vaccinating its children' remark after uproar

Dr Vinod Kumar Paul, who chairs the National Expert Group on Vaccine Administration for Covid-19, has rectified his statement that said no country in the world was vaccinating children following an uproar on social media and backlash from several political leaders.

On May 27, Paul, who is a member (health) of the government think-tank Niti Aayog, released a lengthy statement "busting myths" on India’s vaccination process, which is under scrutiny following a shortage of jabs.

Clarifying the "myth" that the "Centre is not taking any step to vaccinate children," Paul said:

As of now, no country in the world is giving vaccines to children. Also, WHO has no recommendation on vaccinating children. There have been studies about safety of vaccines in children, which have been encouraging. Trials in children in India are also going to begin soon. 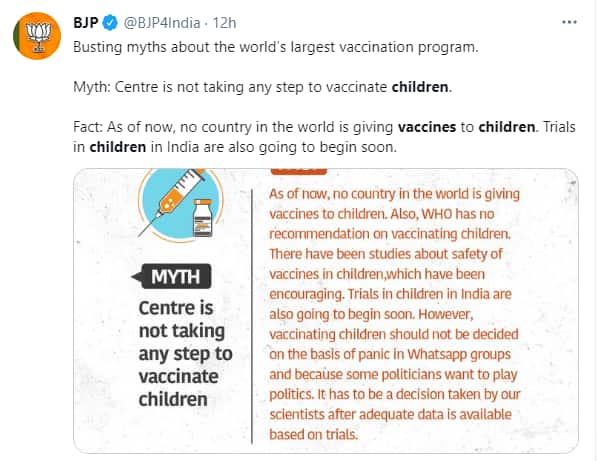 As of now,no country in the world is giving vaccines to children.

WHO has no recommendation on vaccinating children.

Trials on children in India are going to begin soon.

The decision is to be taken by scientists after data is available based on trials. https://t.co/Ib7iz5XP6t

❌ Myth: Centre is not taking any step to vaccinate children

✔️ Fact: As of now, no country in the world is giving vaccines to children. Also, WHO has no recommendation on vaccinating children. pic.twitter.com/nkasogeo19

While the World Health Organisation part is correct, the claim about no country vaccinating children is wrong. The US had given the Pfizer vaccine to 600,000 children aged 12 to 15 after the regulator cleared the American drug maker’s and BioNTech’s shot for use in that age group, Reuters said on May 18. Other countries, too, have started vaccinating children.

Madam my son is 13 years old and already registered for getting his first jab of pfizer vaccine in Bahrain as Bahrain already started vaccination program of 12-17 years old.

You keep sleeping and be in denial . https://t.co/HItikvI0wu

. My tweets (11) were drawing out essential elements of Dr. V K Paul of @NITIAayog answers to FAQs. Subsequently, particularly on children he has given clarification through @ANI. (See below) Have tweeted that too. May kindly see. Thanks for drawing attention. https://t.co/4SjXl7rZGR

While none of the COVID-19 vaccines—Covaxin, Sputnik V and Covishield— approved for emergency use in India have been cleared for children, Pfizer has told the government that its jab is safe for everyone above the age of 12.

Recently, Delhi Chief Minister Arvind Kejriwal called on the Centre to procure Pfizer vaccine for children. "We should procure this vaccine asap (as soon as possible) for our children," he tweeted.

Hyderabad-based Bharat Biotech plans to start the pediatric trials of Covaxin on children between the age of 2 and 18 in June after getting the Drugs Controller General of India’s go-ahead.