This is a long, ambitious book that, apart from covering VK Krishna Menon's major life events, also delves into looking at the man who must have lived with a burden

Biographies of great personalities often tend to focus on the origins of their greatness. That can be found anywhere: in the case of Franz Kafka, for instance, it was found in the city he was born and raised in, and Rainer Stach's three-volume biography of a man known as perhaps the greatest writer of the 20th century also presents a history— political, cultural, artistic— of Prague.

It could also be found in the family the individual was raised in, for families tend to shape great personalities (like they tend to shape any personality, to be sure). For his biography of VK Krishna Menon, senior Congress leader Jairam Ramesh has opted to start with the latter— tracing, mostly via letters, the thought-process of a man with a rather conflicted legacy.

It is because Menon's legacy is conflicted, and it is because the debate has often raged on whether he was, indeed, a great personality or owed his success to India's first Prime Minister Jawaharlal Nehru that Ramesh's tome is important.

In an interview, Ramesh had said that Menon was not just the man he was made out to be --in other words, the man who lost us the war with China. He was much more, and, while Ramesh delves into that particular episode of Menon's life, he also traces the other events that shaped his subject's journey, bringing out what he calls his "chequered brilliance".

Divided into two sections and then further sub-divided into parts and chapters, the book starts off with the pre-1947 years, tracing Menon's journey as "Annie Besant's protege" to being Nehru's "sounding board and global envoy".

Ramesh's account of Menon's activities in the United Kingdom (UK) for India's Independence is particularly important, considering that on his return to India, Menon was resented by the other freedom fighters because of the importance that Nehru accorded to him. But Ramesh provides a background to that importance while also drawing out Menon's contribution to the freedom struggle. 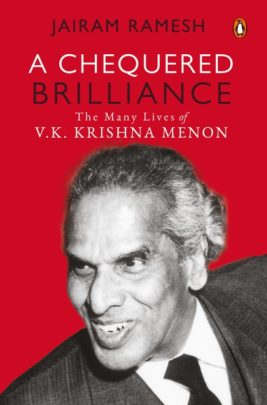 In doing so, Ramesh has painted and, I assume, sought to draw out the personality that Menon commanded quite apart— if not detached— from his association with Nehru.

There is Nehru, of course, and he would continue to cast his shadow over Menon's life, but Ramesh's biography also draws out a Menon independent of our historical assumptions about him, painting him as the man who carried conflict and loneliness within him, despite being a public personality for most of his life (or perhaps because of it?).

We see a Menon, for instance, in throes of inviting articles for his fortnightly broadsheet, the India Review, writing to M.A. Jinnah to give the broadsheet a "benefit of his views" and publishing the likes of MK Gandhi, Bertrand Russel and Romain Rolland.

We also see him as the publisher and the editor, who edited Sigmund Freud's Totem and Taboo— among other titles— for Pelican books, an imprint of Penguin books.

Then, in the post-1947 part, we see him deliver his marathon speech on the question of Jammu and Kashmir (J&K), and there is an interesting bit about that speech— and Menon's fainting— that comes from Carlos Romulo, who was the president of the Security Council then.

"... He was a candidate for Parliament in Bombay and he wanted this. So, they took pictures of him and all that so when he came to, I said, 'Krishna, you know you won the Oscar award?'" Romulo recorded the incident.

Romulo was talking about Menon's election from the North Bombay constituency in 1957, when he had "barely three days" to campaign and which Nehru made into a "referendum on his foreign policy". Five years later, in 1962, came another election from the same constituency, but that year was going to present Menon many more challenges.

In 1962, like 1957, Menon won the high-profile contest comfortably, "more than tripling his margin of victory five years earlier". He was, writes Ramesh, "now on top of the world"— but that world would come crashing down in the October of that year with the Chinese attack on India.

As has been documented before, indications regarding the Chinese intentions were clear in September— if not much before that— when the troops intruded into the Northeast Frontier Agency (NEFA) or today's Arunachal Pradesh. That, however, did not prevent both Nehru and Menon from going about their "business as usual".

"Nehru went to France, Nigeria and Ghana, and Krishna Menon was off to New York. As late as 21 September 1962, Krishna Menon was... making his last speech at the UN on West Irian, later to be known as Papua New Guinea."

The Chinese attacked us almost exactly a month later and as Ramesh paints the picture, it wasn't surprising that for Nehru particularly, everything seemed to be "blowing up" around him.

One would assume that among the other periods of Menon's life, the circumstances of 1962 would be of greatest interest. Ramesh partially justifies it by painting a vivid picture of what transpired, both within the diplomatic and strategic decision-making corridors and inside the Congress party's tug-of-war during those days.

Letters and excerpts from relevant books are presented to the reader with Ramesh and his commentary remaining more or less in the background, as if to say look, here are the facts as they stand, judge for yourself.

In some cases it works, but in many cases the absence of a singular voice and the presence of many voices in the form of letters, book excerpts and newspaper reports make one feel the need for a sustained engagement from the author with the reader.

While it cannot be anybody's case that the book is not rich in detail, it would have been much more effective had Ramesh not restricted himself to the sidelines (particularly since Ramesh is a brilliant writer).

In other words, an analysis, if not an opinion, from the writer regarding those details would have set the tone for the book, a tone that, this reader feels, is somewhat missing.

This is a long, ambitious book that, apart from covering Menon's major life events, also delves into looking at the man who must have lived with a burden. The China episode loomed heavily, for instance, during a conference on Palestine in 1965 in Cairo, when Menon had an interesting war of words with the Chinese delegate who objected to Menon's argument, in which he had not mentioned China at all.

Even as the book proceeds telling the story of its subject, it also provides interesting anecdotes to go along; anecdotes that join certain events in the history with certain personalities— all richly woven into the narrative without diverging from the story.

A meticulously researched book, A Chequered Brilliance adds valuable insight into the scholarship on VK Krishna Menon— a man whose life was marked by various moments of India’s history but defined only by one.