There is a threat that the pandemic can reinforce the regional inequalities with possibilities of scarring society forever, if not handled in a just manner.

We are living in unprecedented times with almost every nation under some kind of lockdown. In most of the countries, including India, first cases of COVID-19 were found in urban centres, from where it spread to the other parts of the country.

The virus is spreading in an unequal world — which means that the experience of people, unfortunately, will be extremely different across regions. There is a threat that the pandemic can reinforce the regional inequalities with possibilities of scarring society forever, if not handled in a just manner.

It is in this context that the support announced under PM Garib Kalyan Scheme is a very good step. Taking cue from best practices and experiences of other nations, India implemented social distancing and a lockdown at a relatively earlier stage of the SARS-CoV-2 virus spread.

The ability to detect the disease and respond via tools such as social distancing and lockdown varies significantly across different states/UTs, because the availability of the resources also differ significantly. What we are facing today is complex interplay of healthcare, labour and leisure, area, education, and information — and each aspect warrants attention.

The current crisis highlights the modest provision of health infrastructure, which varies widely across state, and reiterates the need for strengthening it. The average population served per government hospital is very high in some states, ranging from nearly 170,000 in Madhya Pradesh (MP) and Maharashtra, more than four times that of Haryana and Punjab. Similarly, registered doctors per 1,000 people vary from two in West Bengal, 1.8 in Tamil Nadu to just 0.2 in Haryana, 0.4 in Bihar and MP.

As evident from the painful case of Italy, demographic features play key role in determining the impact of the virus. States with the highest proportion of population above 60 years are Kerala with 13.2 percent, followed by Tamil Nadu with 10.5 percent in 2016. On the other hand, Bihar, Delhi, Uttar Pradesh have just 6.7-7 percent population above 60 years. This clearly shows that demographically Delhi, UP, Bihar, etc. are better placed to fight the crisis than states such as Kerala and Himachal Pradesh.

Similarly, in the time of social distancing, another scarce resource is space. The density of population varies widely among Indian states, which determines the likelihood of interaction. It is extremely difficult to practice quarantine in an overcrowded neighbourhood. Migrant workers and their families board a truck to return to their villages after the 21-day nationwide lockdown was announced, in Ahmedabad, March 25. REUTERS

The destiny of the 21-day lockdown — perhaps the biggest such measure in recent history —largely depends on maintaining law and order, and the flow of essential goods and services. This can be achieved through an effective dissemination of information, which is a big challenge in the era of information overload — which includes an overflow of fake news. WHO Director General Tedros Adhanom Ghebreyesus calls this phenomenon ‘infodemics’, a process in which the rumours also spread fast (like a virus), creating conflicting knowledge in the community under threat.

The flow of information about the pandemic, its risks and precautions to follow are easily accessed in well off and better connected areas than in poorer, less connected areas. The government provides up-to-date information and clarifications, but here also literacy and access to Internet is crucial in determining the flow of information. In this context, the Indian government’s step to replace the normal ringing tone with an awareness message about Coronavirus, in English and other vernaculars is an excellent step.

The literacy rates vary widely across states with Kerala having a 94 percent literate population, while in Bihar it is 61.8 percent, which is the lowest. Also, per capita Internet subscribers stand at 1.4 in Delhi, 1 in Himachal Pradesh and just 0.2 in Uttar Pradesh or 0.3 in Rajasthan and Odisha. Illiteracy makes the optimal utilisation of Internet difficult, making citizens prone to fake news. 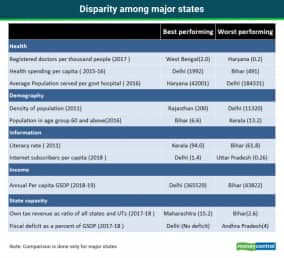 Nearly 87 percent of India’s workforce is in the informal sector without the luxury of a work from home option. They have two options: work, which requires physical interaction and increases the risk of getting infected and spreading infection, or stay at home, which means no income and yet at a higher risk of infection because of overcrowded homes and surroundings. Although the spread of informality is quite widespread in India, states such as West Bengal and Uttar Pradesh have a higher concentration of informal workers than the south-western states.

The resources available to states largely stems from their fiscal capacity, which is not uniform. Out of the tax revenue generated by all states and UTs, Maharashtra accounts for more than 15 percent and Uttar Pradesh accounts for 9.7 percent; much higher than West Bengal and Delhi. The per capita health expenditure, or state spend on each resident, ranges from Rs 491 in Bihar to Rs 1,463 in Kerala and Rs 2,667 in Himachal Pradesh. The disparity among states on this parameter is huge.

Considering these factors, we can say that inequalities within India determine how people experience pandemics, who is hit hard, who is more likely to survive, and, most importantly, who will recover fastest once the virus is gone. The 21-day lockdown announced by Prime Minister Narendra Modi is the only way to control the spread of the virus and hopefully break the transmission cycle. It is imperative that everyone, irrespective of our inequalities, follow it to the T. The ability to manage the crisis will differ from state to state though everyone faces the same degree of threat.

In such times, the Rs 1.7 lakh-crore financial package announced by central government under the Prime Minister Garib Kalyan Scheme is timely and much-needed.