Covid-19 pandemic | A grim forecast for the tourism sector

The Covid-19 outbreak, now spanning more than 150 countries has reached a critical stage creating global unrest. The total confirmed cases have passed the 200,000-mark with an overall death toll of 8,700-plus as of March 19. With an astounding level of contagion, the World Health Organization (WHO) has declared Covid-19 a global pandemic.

At this speed, the health crisis is not only taking a heavy toll on human lives but also engendering an economic crisis, pushing more businesses into bankruptcy. Governments across the world are taking measures to flatten the curve. These measures will have serious economic implications which is just as much a concern as public health because sooner than later, the impact will be felt by every global citizen.

India has been witnessing a surge in the number of confirmed cases. To prevent the spread, provisions of Section 2 of the Epidemic Diseases Act, 1897, have been invoked by the Cabinet Secretary. Many state governments and Union Territories have declared a complete or partial lockdown. India has suspended all visas issued to nationals of any country until April 15. Section 144 of the Code of Criminal Procedure (CrPc) Act, 1973, has been imposed on tour groups to control the possible escalation of cases. These developments, however necessary, have put the tourism sector under extreme stress test. Depending on the containment efforts both globally and locally, the magnitude of economic impact would vary.

As per the calculation of The World Travel and Tourism Council (WTTC), the tourism industry in India forms 9.2 percent of India’s GDP and supports 42.67 million jobs, which constitutes 8.1 percent of employment. In 2018, foreign exchange earnings from tourism across India stood at $28 billion. Since 2009, the earnings have exponentially increased, making tourism a significant source of India’s foreign exchange earnings.

The Indian tourism sector is largely driven by domestic tourists. The number of domestic tourist visits to all states and Union Territories stood at 1,854.9 million with an annual growth rate of 11.9 percent in 2018. 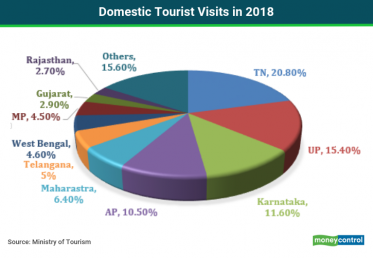 The lockdown declared by many states, especially those with thriving tourism, will see revenues plummeting. Coming to Foreign Tourist Arrivals (FTAs), the number of FTAs in India stood at 10.56 million registering an annual growth of 5.2 percent in 2018. In 2019, this number was reduced to 3.1 per cent. 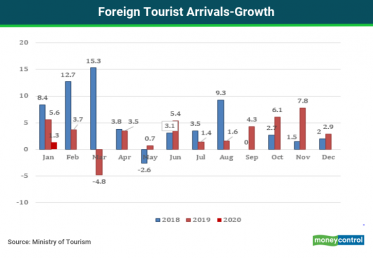 Given the current state of affairs, the immediate impacts on tourism industry could be summarised in four points. One, a dip in the foreign exchange earnings may translate to reduced resilience in the event of a market shock.

Two, the growth in foreign arrivals in January, which has dropped to 1.3 percent, is likely to see the FTAs numbers entering the negative quadrant in subsequent months since a good number of top source countries are some of the worst Covid-19-affected regions. As per the data shared by the ministry of tourism, the highest percentage share of FTAs in India during 2018–19, among the top 10 source countries, was from Bangladesh (21.37 percent) followed by the United States (13.8 percent), the United Kingdom (9.75 percent), Canada (3.32 percent), Australia (3.28 percent), Malaysia (3.02 percent), China (2.67 percent), Germany (2.6 percent) and Russia (2.48 percent). The latest January figure of FTAs features Republic of Korea and France in the top source countries.

Three, the medical tourism sector, which has been showing an unprecedented growth rate in recent times, may see a short-term downfall. There is still a certain optimism in this niche tourism as the growth may pick up due to India's competitive advantage of inexpensive healthcare and more importantly, it constitutes priority travel.

Four, the tourism sector has many linkages with transport, hotels and restaurants which observe momentum through the activities of the tourists. The impact will also spiral down to other economic sectors, reducing the consumption velocity drastically.

Worryingly, the tourism and hospitality sector that is in need of financial assistance is less likely to find any favour from the banking sector as the past record of the hospitality sector is riddled with loan defaults. Considering the ongoing banking crisis, banks will strictly assess the impact on balance sheets and asset quality of businesses. This will throttle the sector further.

If the spread is not contained on the expected lines, the already slowing Indian economy may edge towards a recessionary phase. The government’s action is warranted in critical sectors, the absence of which may lead many industries to file bankruptcy. The impact would be far reaching, creating a vicious cycle of high unemployment, low growth and dampened investments.