Will the RBI be circumspect and await definite signs of growth, or will it prefer to be ahead of the curve by signalling something sooner?

Nobody expects RBI to tinker with rates when it announces the decision of its MPC (Monetary Policy Committee) meeting on Wednesday, the first policy decision of the new calendar year and the first after the Union Budget.

From the time of the RBI’s last policy on December 6, the yield on the 10-year benchmark has only moved in one direction — up and up. The movement in yield isn’t an isolated phenomenon — all indicators tracked by RBI watchers are unequivocally pointing towards the end of the easing cycle.

Markets, therefore, wouldn’t be surprised with a “hawkish” tone; they are in fact looking for cues to the timing of the first rate increase of the cycle. 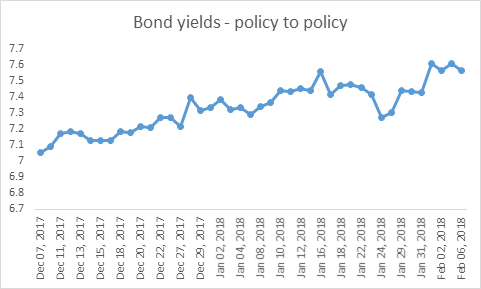 Inflation will continue to remain a worry

In the last few months, the RBI has been gradually nudging up its inflation forecast. While keeping the medium-term target for consumer price index (CPI) inflation of 4 per cent within a band of +/- 2 per cent, the Central Bank had raised the near-term forecast of inflation to 4.3-4.7 percent for the second half of FY18.

Courtesy the low base, Consumer Price Inflation (CPI) rose to 5.21% in December, thereby crossing the expected zone. RBI will be keeping an eye on how the fading impact of the central government’s HRA (house rent allowance) component along with pass-through of a fall in GST rates impacts inflation in the coming months. 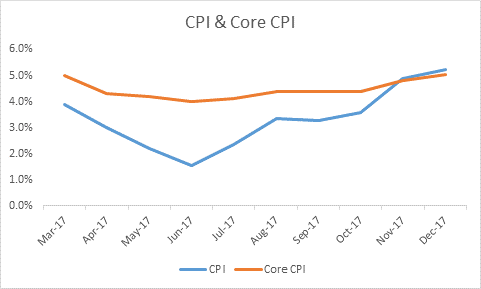 In recent times, RBI and the government have both openly expressed their concerns about rising crude oil prices — India’s historic macroeconomic vulnerability. In fact, the recently released Economic  Survey points fingers at aggressive output cuts by Saudi Arabia (and Russia) in advance of the planned listing of the Saudi Arabian oil company, Aramco, which could force oil prices even higher.

The International Monetary Fund in its latest outlook report has mentioned that it is witnessing the broadest synchronized global growth upsurge since 2010. Global output is estimated to have grown by 3.7 percent in 2017, and the growth forecasts for 2018 and 2019 have been revised upward by 0.2 percentage points to 3.9 percent.

Consequently, the firmness in commodity prices that is now beginning to hurt importers is unlikely to reverse. 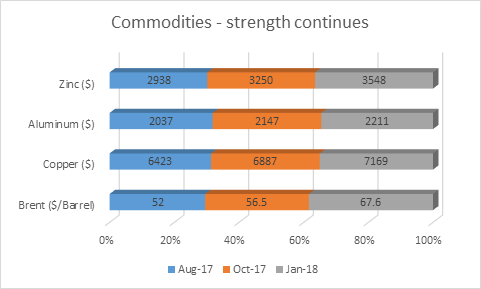 The Economic Survey expects real GDP growth to reach 6.75% in FY18, higher than the CSO’s forecast of 6.5 percent, implying that growth in the second half would rebound to 7.5 percent. Growth is expected to rebound to 7-7.5% in FY19.

Credit growth has also picked up. From the lows of 5%, credit growth has now hit double digits (10.1%) and according to bankers, it is not just the demonetisation base effect, there are early signs of genuine revival.

Thanks to the base, the Index of Industrial Production (IIP) has seen a sharp surge in the month of November 2017. 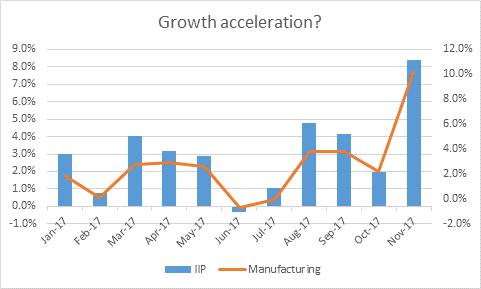 While the RBI has so far maintained the full year GVA (gross value added) target for FY18 at 6.7% with an improved outlook for the second half, its latest outlook on growth will be keenly watched.

Markets will also be eager to hear RBI’s feedback on the Union Budget. The government has named the GST rollout and lower dividend from the central bank as the primary reasons for the fiscal slippage in FY18 from the budgeted 3.2% of GDP to 3.5%.

The government has also shifted the FRBM (fiscal responsibility & budget management) goal post to FY21 and loosened its purse strings in a pre-poll year and pegged the fiscal deficit target at 3.3% in FY19 – although the underlying assumptions ride heavily on buoyancy in GST collections. It also assumes a modest oil scenario (as the petroleum subsidy hasn’t risen much) and revenue expenditure growth of 10% despite some tall promises that are not yet accounted for in the estimates. While there could be upside from LTCG tax or divestment receipts, questions remain on the credibility of the estimate. 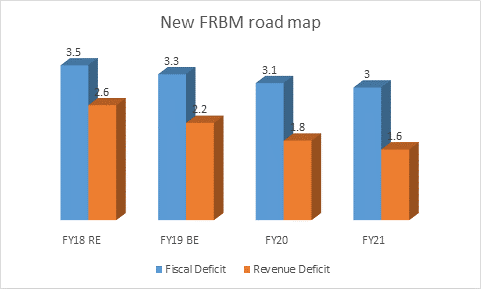 Additionally, to alleviate rural distress, the government has promised a remunerative Minimum Support Price (1.5X the input costs) in the upcoming kharif season, which could add to the inflationary pressure.

Finally, globally interest rates are gradually moving up. The narrowing of the interest gap (especially with respect to the United States, which is expected to ratchet up rates at least three times in calendar 2018) could trigger capital outflows.

The key question is: Will the RBI be circumspect and await definite signs of growth, or will it prefer to be ahead of the curve by signalling something sooner?Get access to India's fastest growing financial subscriptions service Moneycontrol Pro for as little as Rs 599 for first year. Use the code "GETPRO". Moneycontrol Pro offers you all the information you need for wealth creation including actionable investment ideas, independent research and insights & analysis For more information, check out the Moneycontrol website or mobile app.