20 charts that define 2020: From banned apps to most-downloaded apps and the most-searched terms to the people most tweeted about, check out the events that charted the course of the Indian economy this past year.

The year 2020 is one that will stay etched on people's memory. First, a deadly virus threw us off-guard right at the onset of the year, leaving the economy in a shambles, and natural calamities later in the year added to the misery. Job losses hit the roof and inflation ate away into savings.

But it wasn't all gloom. 2020 also brought happy moments for some. Stock investors, for example, saw a few stellar IPO listings adding heft to the equity market, foreign investors poured in a record amount of funds into the country, and businesses such as OTTs had a field day at the expense of multiplexes, as people stuck at home scooped up everything on offer.

From banned apps to most downloaded apps and the most searched terms to the people most tweeted about, check out the key events that charted the course of the Indian economy this past year -- 20 charts that define 2020:

The first case of the novel coronavirus in India was reported on January 30, 2020, in the southern state of Kerala. Just a few months later, the virus had spread like wildfire and by March the country had to go under lockdown to curb the spread. On September 17, India recorded its highest daily new cases (97,894) and as on December 19, it reported over 1 crore cases with the death toll hitting 1.45 lakh. The number of active cases in India currently is over 3 lakh.
Close

Impact on the stock market

The stock market also bore the brunt of the coronavirus-led lockdown. On March 23, the Sensex ended at over three-year low to 25,981, falling 3,935 points and the Nifty at a four-year low, (recording biggest single-day decline) down by 1,135 points to 7,610. However, with the gradual easing of the restrictions and opening up of the economy, the market has bounced back to hit fresh highs.

The year of IPOs

The year 2020 featured some stellar IPOs. Companies managed to garner over Rs 30,000 crore, the second highest by way of IPOs in the last decade, Moneycontrol reported on December 16, 2020. 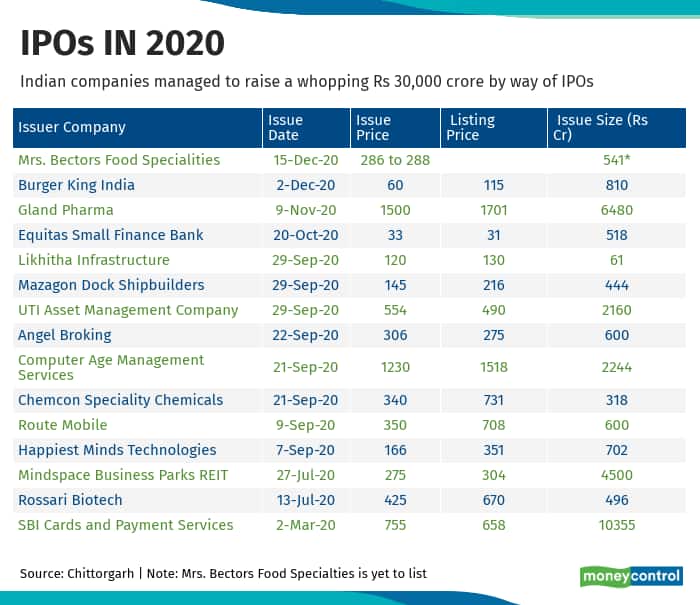 Most tweeted about people in 2020 Most downloaded mobile apps in 2020

China-based mobile app TikTok was among the most downloaded apps the world over this year by month, according to data by Sensor Tower. With lockdowns imposed across continents, downloads of video communications app ZOOM shot up in the month of April, the highest for any app in a month this year. 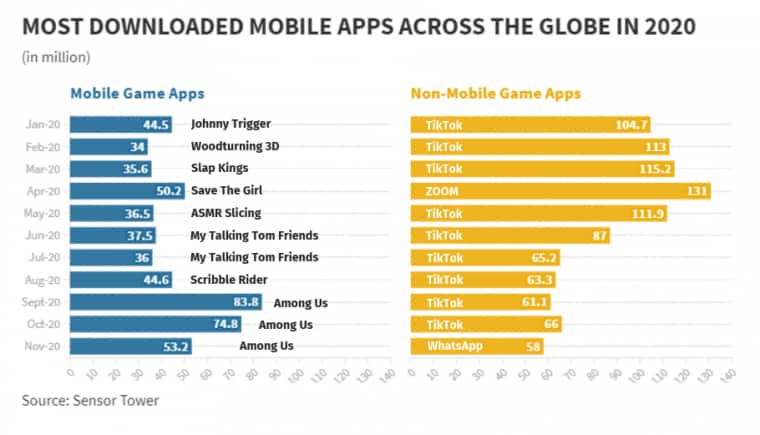 Fall in the growth of eight core industries

The output of eight core (coal, crude oil, natural gas, refinery products, fertilizers, steel, cement and electricity) industries contracted in March as the lockdown was imposed, falling further to an unprecedented -37.9 percent in April 2020. The impact of the lockdown later became evident on the Indian economy with GDP contracting by 23.9 percent in the June quarter, the steepest fall in almost 4 decades. The GDP further shrank by 7.5 percent in the September quarter, with India technically entering into a recession.

Month-wise total digital payments have reported a fluctuating trend this year after a significant fall in April over the previous month. Payments by digital mode picked up in the successive months after the low recorded this year.

The pandemic also impacted the country's merchandise trade. Exports and imports dipped in March and April as lockdowns were imposed worldwide, paralysing the global supply chains.

The initial spread of COVID-19 cases in the country led to a strict lockdown - imposed as a precautionary measure by the government - to further  prevent the outbreak, thus restricting and limiting people’s movement. Here’s a look at the change in people’s mobility to certain places of visit over the months based on Google’s COVID-19 community mobility report for India:

The lockdown affected air travel across the world including grounding of the domestic aviation sector in India. The impact on the sector can be assessed from fall in passengers carried by domestic commercial airlines.

Brent crude oil slumped to $16 a barrel in April this year, its lowest this century, as a result of lockdowns imposed by countries worldwide due to the COVID-19 pandemic. However, this did not translate to much change in the retail fuel prices in India. In December 2020, fuel prices in India hit their highest levels since September 2018, short of their all-time high recorded in October 2018.

While the majority of the sectors were negatively affected by the lockdown, the OTT (Over-the-top) platforms gained the most from the restrictions imposed on people’s movement. As people were confined to their homes, subscriptions across video streaming platforms and data usage surged in April 2020, and the months that followed.

Industries and businesses were hit as a result of the lockdown, impacting revenue streams causing widespread job losses across sectors. This was mirrored with a high unemployment rate of 23.52 percent in the month of April, according to CMIE data. With things falling back on track, recovery is yet to reach its pre-lockdown levels.

With the job losses and the economy still recovering, retail inflation has been on a high, above 6 percent all through this year, except for March 2020.

After the initial dip in FDI equity inflows in the months between April and June, inflows picked up in July and August, recording the highest ever figure for the first 5 months of a financial year and 16 percent more compared to the first five months of the previous financial year.

Likewise, FII inflows hit a record high last month with investments worth over Rs 60,000 crore, as on November 27, against the withdrawal of a similar amount reported earlier in March this year.

On the one hand while job-loss and unemployment rate was high in April and May, registration of new companies soared between July and October, official data showed. More than 16,000 new companies were registered in the month of July,  a record breaking high of seven-years.

Over 200 mobile apps blocked by India

While TikTok was one of the most downloaded apps this year world over, India banned the popular Chinese-origin app along with other 200+ apps. The Indian government in June blocked 59 mobile apps (mostly of Chinese origin or being marketed/distributed by entities based in that country). The decision was taken as a preventive measure to protect data and safeguard privacy of Indian citizens. Later in September, 118 mobile apps were blocked, followed by 43 more in November.

Passing away of notable personalities

The year will also be remembered for the passing away of several notable legends and personalities across fraternity worldwide, here are a select few listed by us: 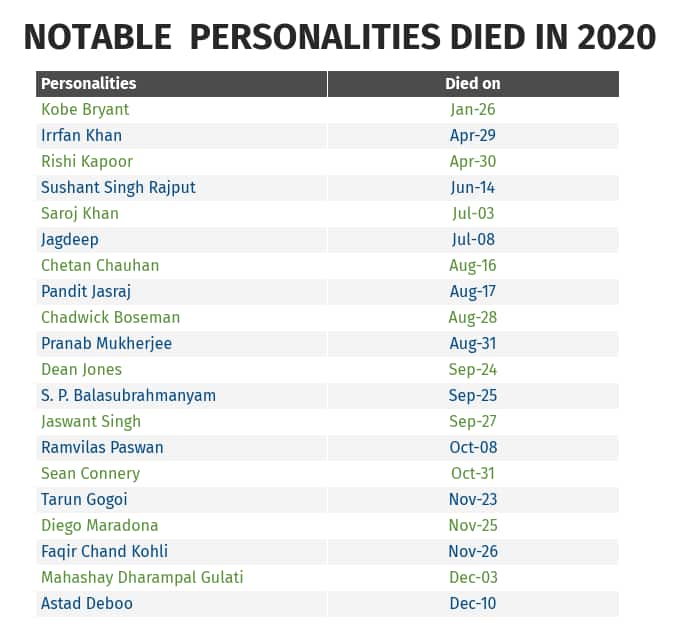 What Indians searched the most in 2020

The Indian Premier League or popularly known as IPL, one of the most high-profile T-20 cricket tournaments held across the world was the most trending or searched event by Indians on Google this year. Among the other topmost trending events in India were--coronavirus, US election results, PM Kisan Yojana and Bihar election results. 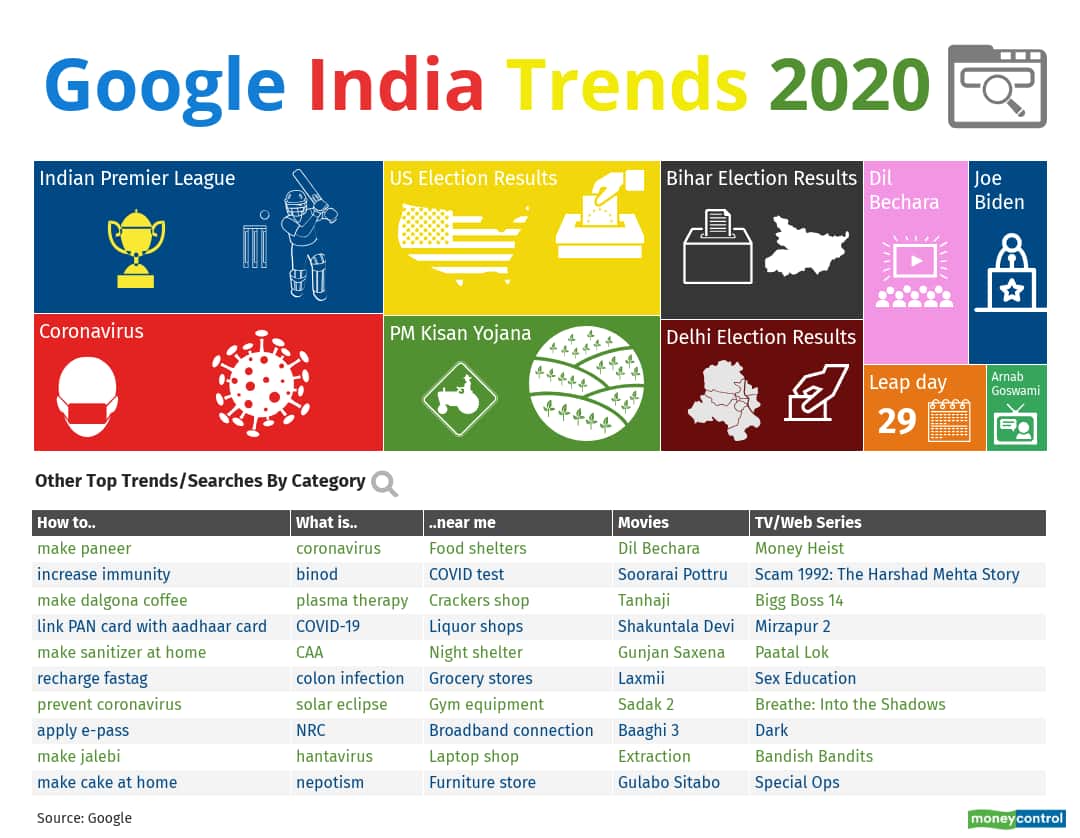