India fares better when compared with other nations in terms of per million population.


India’s COVID-19 case tally is now above 1.30 crore with 1,31,968 new cases reported as per the health ministry’s April 9 update. New cases recorded a new high for the third consecutive day.

India reported 780 new deaths (highest in 2021) and 61,899 new recoveries in the last 24 hours, the latest release shows. More than 9.43 crore vaccinations have been administered across India, according to the April 9 update, with 36,91,511 new vaccinations reported in a day.

Of the total vaccinations administered till date, 87 percent are recipients of their first dose while 13 percent have received the second dose. Among states, Maharashtra has administered the most nearly 9.3 million vaccine doses, followed by Rajasthan (8.8 million) and Gujarat (8.5 million). 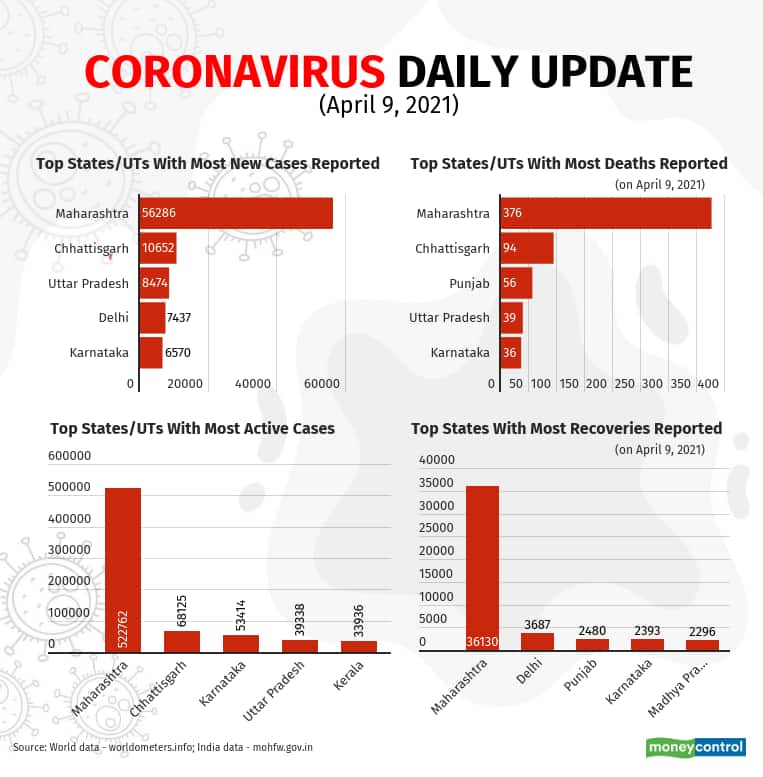 Maharashtra also reported the most 376 or 48 percent new deaths, followed by Chhattisgarh (94), Punjab (56), Uttar Pradesh (39) and Karnataka (36). These five states account for 77 percent of all the new deaths reported across the country.

About 13 states and union territories did not report any deaths today. These include: Andaman and Nicobar, Arunachal Pradesh, Dadra and Nagar Haveli/Daman and Diu, Ladakh, Lakshadweep, Mizoram, Nagaland, Odisha, Puducherry, Rajasthan, Sikkim and Tripura. The total recoveries in India are now over 1.19 crore while total deaths now stand 1,67,642 as per April 9 update. The mortality rate in the country is at 1.3 percent with Punjab reporting the highest (2.8 percent). More than 13 lakh daily tests reported as on April 8 with more than 25.40 crore tests carried out till date. Despite the high number of cases and deaths reported by India, the country fares better when compared with other nations in terms of per million population.
Moneycontrol News
TAGS: #Chhattisgarh #coronavirus #COVID19 #India #Maharashtra
first published: Apr 9, 2021 11:27 am