India reported more than 59,000 COVID-19 new cases on March 26. Active cases have now risen to 4.21 lakh while more than 5.55 crore vaccines have been administered to date.


India's coronavirus count continues to surge with 59,118 new infections reported in the last 24 hours, pushing the country's total COVID-19 cases to above 1.18 crore, the health ministry’s update on March 26 said.

India reported 257 deaths and 32,987 new recoveries in the last 24 hours, the latest release shows. More than 5.55 crore vaccine doses have been administered across India, according to the March 26 update, with 23,58,731 new vaccinations reported in a day.

Of the total vaccines, 85 percent are first doses, while 15 percent are second doses. Among states, Maharashtra has administered the most 5.2 million vaccines followed by Rajasthan (5.1 million) and Uttar Pradesh (5 million). 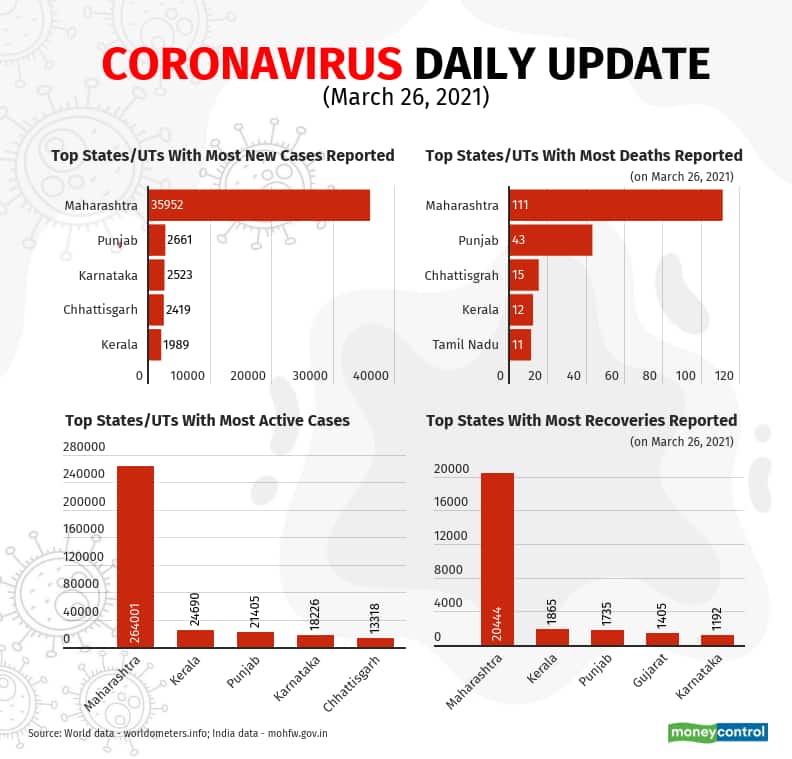 Maharashtra reported the most (111) new deaths followed by Punjab (43), Chhattisgarh (15, Kerala (12) and Tamil Nadu (11). These five states account for 75 percent of the new deaths reported across the country.

About 15 states and union territories did not report any deaths in the last 24 hours. These include Andaman and Nicobar, Arunachal Pradesh, Dadra and Nagar Haveli/Daman and Diu, Jammu and Kashmir, Jharkhand, Ladakh, Lakshadweep, Manipur, Mizoram, Odisha, Puducherry, Rajasthan, Sikkim and Tripura.