Rajasthan’s sacred groves are under threat from rampant green development

The sacred groves or orans, preserved for centuries by the villagers of Rajasthan, have started coming under attack from encroachers and developmental activities, forcing communities to rise up in protest.

The administration has been allotting these common lands, locally known as orans, to mining, solar and other industries.

Barmer: In 2002, villagers from around 10 villages in Rajasthan’s Barmer district were successful in saving three bighas (1 bigha is equal to 0.62 acres) of their sacred land, locally known as oran, from being allotted to a stone mining company by the district administration. The allocation was cancelled after a three-month-long battle which saw the community come together to protest this threat to their source of firewood, water and livestock feed.

But that was just the beginning. Over the years, they have had to fight many times to save their oran from encroachers, miners and the government. They continue to fight till today.

Orans are groves of trees, with a rich diversity of traditional flora and fauna and water bodies, considered sacred and preserved by the locals in this desert state. Orans, which derives from the Sanskrit word ‘aranya’ meaning ‘forest’ or ‘wilderness’, were often set aside by Rajasthan’s feudal lords for religious purposes. An oran ensures food and fodder for the community and the large herds of camels, sheep and goats in times of famine.

Orans are preserved in the name of local deities; they are open to the whole community, irrespective of caste or creed, as long as the villagers follow certain rules governing the use of orans. Tradition dictates that not a single tree or plant from here is cut, for example; only seasonal grazing of livestock is allowed.

But increasingly, these common lands have been allotted by the administration to mining, solar and other industries, to the detriment of the ecological health of the land. Most recently, the villagers in Rajasthan’s Jaisalmer district are engaged in a movement to protect their sacred land from being allotted to wind and solar energy companies.

Residents allege that power companies and the sand mafia have encroached upon the Degrai Mata temple at Devikot in Jaisalmer. Durajan Singh, secretary at Degrai Mata temple and member of Oran Bachao Samiti said that around 60,000 bighas had been set aside for the 610-year-old temple by the former royals of Jaisalmer.

According to Singh, post Independence when the land settlement process was initiated, this oran was designated as government revenue land but villagers remained unaware of its status until 1999, when solar companies started cutting down trees to set up power plants.

Following protests, the state government agreed to designate 24,000 bighas as Oran land but no decision was taken about the remaining land, despite sustained demands and protests by the locals.

Singh said that for the past few years the government has been allotting land to power companies from this undesignated 36,000 bighas but now it has started allotments on the registered Oran lands as well. Villagers of more than a dozen villages have been protesting for the past six months against these allotments. Recently, they took out a 60-kilometre long procession to mark their protest. 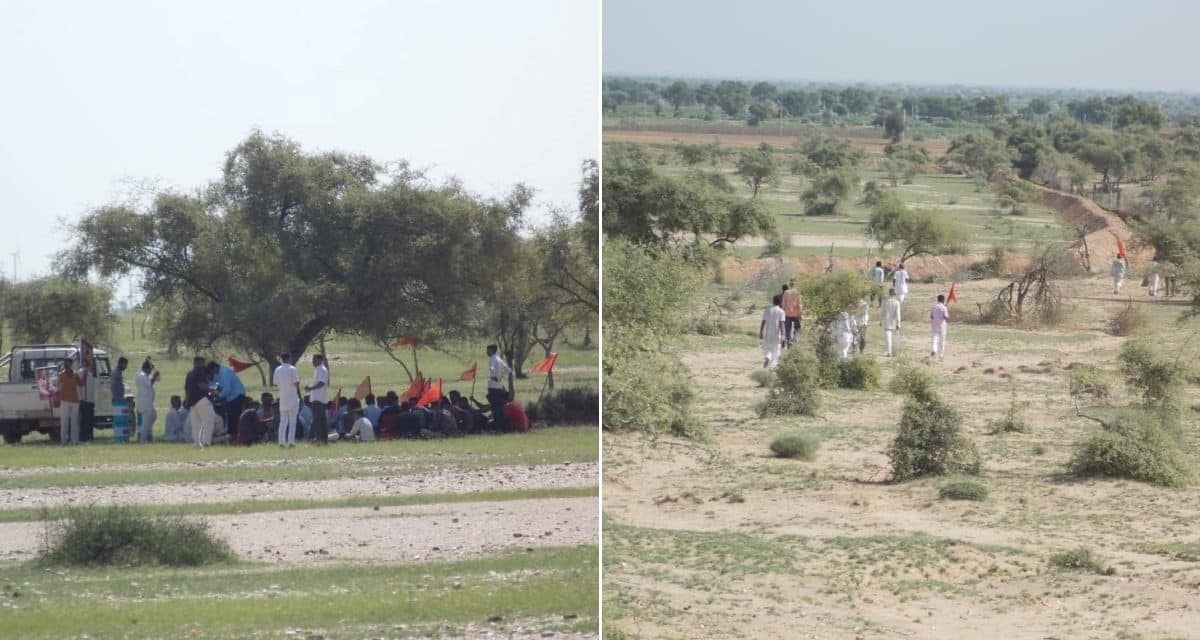 Recently, villagers took out a 60-kilometre procession to mark their protest against the allotment of oran land to power and mining companies.

Sumer Singh Bhati, a local resident and social activist who is actively participating in this oran aandolan (protest) said, “In the last few years, the government has allowed private power companies and sand mining firms to recklessly cut trees and destroy the oran land. If it is not stopped, communities will have to pay the price in times of need,” he said.

The villagers now want the government to register the remaining land as protected oran land that can’t be allocated to private or state players. They cite the precedence of the people of Asada village in Barmer sitting in Satyagraha (non-violent protest) in 1952 to save around 800 bighas of oran land, forcing the government to finally recognise and register it as such.

They simply want implementation of the Rajasthan government’s acceptance in 2018 of the recommendation by the Central Empowered Committee (CEC) to include sacred groves such as Orans and ‘Dev vans’ under forest land.

Oasis in the desert

Author of Oran-Hamara Jeevan and regional director at Nehru Yuva Kendra, an autonomous organisation under the Ministry of Youth Affairs and Sports, Dr Bhuvnesh Jain, pointed out that these orans played an important role in biodiversity conservation by preserving the endemic, endangered and economically important plant species.

Jain further stated that orans are home to many types of grasses, herbs, medicinal plants, shrubs and trees, which are on the verge of extinction. They are also the habitat of many animals and birds like godawan (Great Indian Bustard), deer, and jackal. Technically speaking, he said that the Sariska, Ranthambore and Desert National Park are all pasture lands or orans.

According to Jain, orans were once considered an important lifeline in the desert. But with passing time and urbanisation, people started ignoring them and their importance has somewhat reduced. But for pastoral communities, orans are still, quite literally, an oasis in the desert.

According to Sumer Singh Bhati, a resident of Sanwta village in Jaisalmer who is actively involved in the Oran protection movement, their region has one of highest populations of camels in the state. Over 5,000 camels are dependent on the Degrai Mata temple oran alone.

Malaram Godara, a resident of Araniyala village in Barmer, said that orans are a big source of support during the frequent droughts that this part of Rajasthan experiences. He explained that during such situations, people are still able to manage at least drinking water for the community and, more importantly, fodder and water for their thousands of livestock. The orans in this region are home to animals like deer and jackals, and birds such as the Great Indian Bustard.

Mal Singh Jamara’s family has approximately 500 camels, 1,000 goats and 130 cows. Despite owning such a large herd, he has never had to worry about droughts in the past as the livestock were guaranteed food at the orans. “But for a few years now, power companies have been disturbing the oran land by cutting down the trees. Our cattle are not even safe from the power lines laid on the ground. In recent months, many endangered animals like the Great Indian Bustard have died due to the high tension lines,” he said.

Pradeep Pagariya, an agricultural scientist at Krishi Vigyan Kendra, Barmer, said that the oran was not only vital for the community but is also an important buffer against pollution, the dense green cover helpful in preventing the development of sand storms in the desert. They further play a critical role in maintaining the quality of air and reducing pollutants.

"But modernisation and mismanagement have resulted in the destruction of this ecosystem," said Narendra Tansukhani, a Barmer-based social activist who participated in the oran aandolan.

Aman Singh, chief coordinator of Krishi Avam Paristhitiki Vikas Sansthan, wrote, “It is a pity that orans, which are unique examples of gene pool conservation based on the socio-cultural value system, i.e., traditional biodiversity conservation methodology, has not attracted much attention from scientists, foresters and policymakers.”

Tansukhani said that for many years, they have been demanding that these oran lands be declared heritage sites.

It is only recently that the Rajasthan government, in a long-overdue action under the Rajasthan Biological Diversity Rules, has initiated the process to declare seven sacred groves of western Rajasthan heritage sites. Jain, in coordination with Rajasthan’s revenue department, conducted a survey on the oran lands in the Jodhpur region. Data showed that there is a total of 1,34,749.75 hectares of oran land in 1,759 villages of the Jodhpur division. These lands will now be officially exempt from being allocated for industry and being encroached upon.

As such, orans are simply defined in the revenue records as ‘Culturable Waste Land’ which allows the government to distribute these land for other purposes. Therefore, Singh said, the need of the hour is policy and necessary legislation to legally and Constitutionally uphold the community’s right to own and manage these orans, which should be declared forests or grazing land with the ownership of communities. 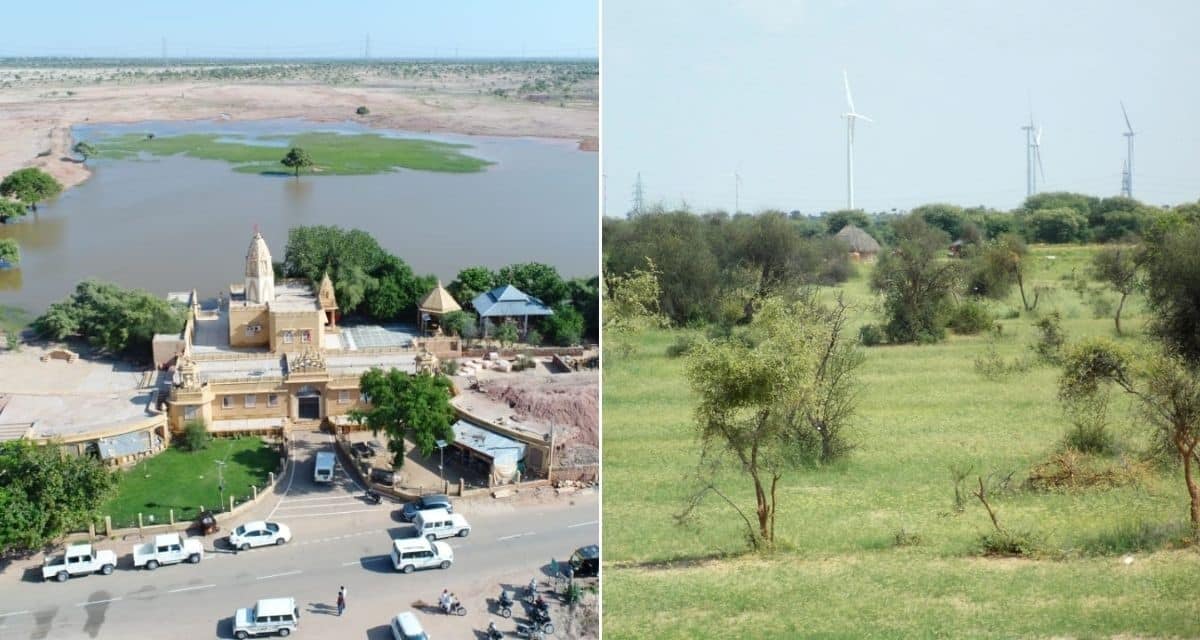