In most countries, central banks are bankers to the government where the latter parks deposits and avails of loans. That apart, much of their monetary policy operations use bonds issued by the government.

In the case of RBI, Section 20 and 21 of RBI Act (1934) specify the transactional relationship between the central bank and the Government.

In this context, let us review the loans from the RBI to the Centre. The apex bank provides loans and advances to the government to meet the temporary gap between receipts and payments, which are also termed as ways and means advances (WMA). Both in consultation fix the WMA limits from time to time. These limits are set mainly for the first and second half of the financial year with a few exceptions (Figure 1). The RBI charges the WMA at repo rate and also allows an overdraft at an additional 2 percent. 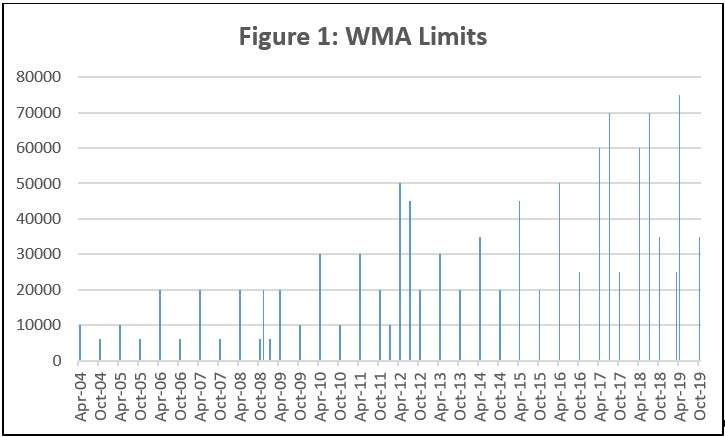 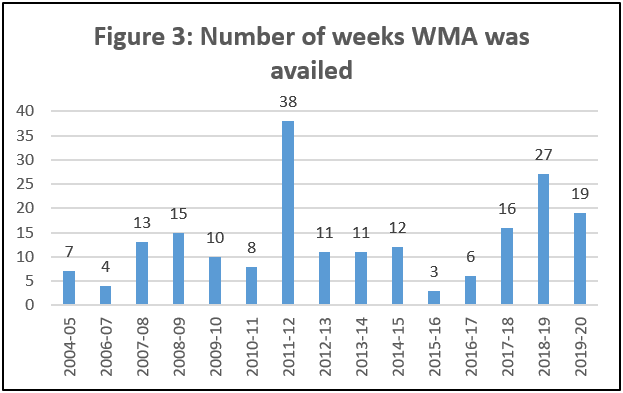 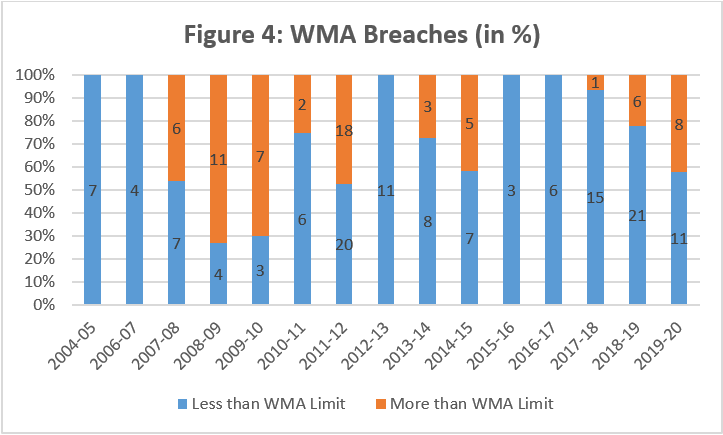 In first week of December, we saw the advances at Rs 52,575 crore, higher than the limit of Rs 35,000 crore, which was paid back in the subsequent week. The WMA again went up sharply in the first week of January 2020. These sudden spikes show that the flow of funds has not been on expected lines.

The agreement between the RBI and the government also specifies that the central bank “may trigger fresh floatation of market loans when the Government of India utilises 75 per cent of the WMA limit”. Given the serious mismatches, the government issued Cash Management Bills (CMB) (of 76-day tenure) worth of Rs 30,000 crore on December 31, 2019. We now know that on January 3, 2020, the government availed of a record WMA, followed by another CMB issuance of Rs 30,000 crore (63 days) on December 13 last year.

In recent months, there have been talks of the government under fiscal pressure. The pressure is mainly due to slowdown in the economy, which has led to less growth in tax revenues. Then, there are continued problems in GST filing and structure, which has compounded the matter.

The constant use of WMA is one signal which shows that the government is indeed under fiscal pressure. In 2011-12 when WMA was picked for 38 weeks, this was the case. The government had projected a fiscal deficit of 4.6 percent for 2011-12, but the revised estimate put it at 5.9 percent. The final figure was 5.7 percent, but by then, damage was done.

Likewise, in 2018-19 when WMA was used 27 times, there were expectations that the government will not be able to meet the fiscal deficit target of 3.3 percent, but somehow it could contain the deficit at 3.4 percent.

There are similar expectations that the government might not be able to meet its fiscal deficit target of 3.3 percent for 2019-20. The job is tough as it requires the government to keep a tab on expenditure and ask ministries not to spend. But that would adversely impact GDP growth, which has been projected at a decade low of 5 percent.

We will have to wait for the Union Budget to get the revised deficit numbers, but the WMA trend does give us some picture which is not very comforting.

The above analysis also shows that the relationship between governments and central banks is far trickier than the usual talk of central bank independence. They are far closer than we are made to think of.

This does not imply that central banks should not have autonomy. On the contrary, just like in any principal-agent relationship, an agent will achieve its objectives if it is given adequate autonomy by the principal. The same is the case with central banks, too.

Amol Agrawal is faculty at Ahmedabad University. Views are personal.